In May 2014, before the Club was officially formed, founder members George and Susan compleated their 2nd round of Munros on Sgurr A’ Mhaoraich staying at the Independent Invergarry Hostel. Five and a bit years down the line they planned to complete their 3rd Munro round on the same hill and once again this venue was chosen to host the weekend, this time as an official Club meet.

The Hostel is well situated near the Great Glen Way and a number of Munros including the weekend’s target are within easy reach. The Hostel had been taken over since the previous visit with an upgrade in comfort and facilities. The place was now looked after with fastidious attentiveness by the new owners. 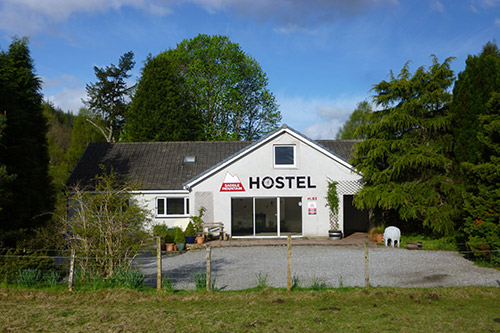 Everyone was pleased to see former member Ian Miller attend the meet.

Many of the members had only returned from the Club’s Pyrenean adventure on the Wednesday before and there was barely time to wash and dry the Icebreakers before heading off again. There was no climbing done by anyone on their way north on Friday.

In May 2014, George, Susan and those attending enjoyed a leisurely saunter up the hill in beautiful sunshine and some considerable time was spent on the summit indulging in well-deserved refreshment. Surely it wouldn’t be too much to expect similarly balmy conditions this time round…. The forecast on Friday the 13th suggested otherwise! And on Saturday morning the Met Office charts confirmed the big dark splodges over the area – and fast moving splodges at that.

On Saturday morning there was a lot of looking out the window disbelievingly as the horizontal rain battered the panes. There was no way though that George and Susan would be denied their target, so bags were silently packed, and double checked for wet weather gear as individuals’ moods ranged from the hesitantly reluctant to the brashly bravado.

There was nothing hesitant about Norrie’s reluctance though. He didn’t even get into the stalls never mind offer a refusal at the first hurdle. Instead he decided to tackle an established route – Petrol Station Direct where he bought a newspaper and settled back down in the Hostel alongside a bubbling coffee-pot.

One party tried to avoid the climb by heading north-east towards Fort Augustus, but they were rumbled and redirected back along the right road. 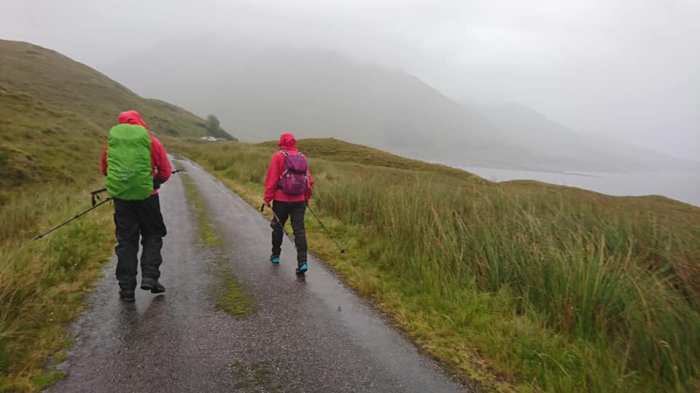 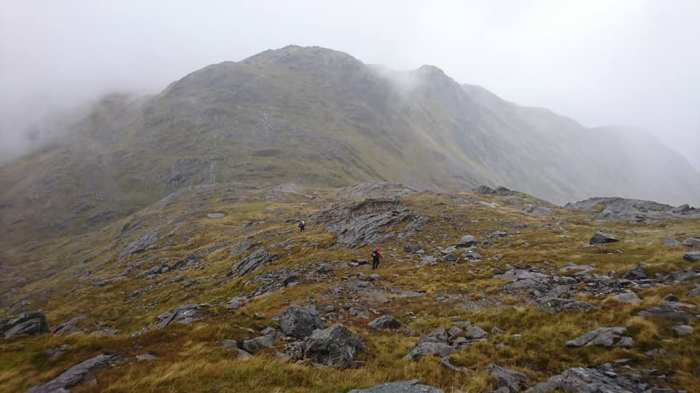 Raymond had taken his wee Jack Russell, Flora on the trip. She was well used to climbing the hills but the conditions on the day were too much as she began shivering on the ascent. He therefore retreated, with Jim Aire in tow to ensure he wouldn’t get too lonely in the pub after he took the dog for a less traumatic walk along the River Garry.

Lorn’s wife Liz and her pal Angela had climbed their first Munro a couple of months previously when Jason compleated on Blaven. This time round though the decision was made leave their 2nd Munro for another and the three “otter’s pockets” slithered their way back down.

Duncan and Tina had spent some inclement days in the hills in the recent past but the extent of the wind and rain was too discouraging and a descent for lunch in Fort Augustus was quickly agreed as they too abandoned the climb.

Mike and Marie made it up around three quarters of the way before deciding to discontinue and return to base – mostly on foot but with a couple of unintended bum-slides along the way.

The rest of the gang managed to get their heads down and battle through the violently gusting winds to attain the summit. Shelter was taken for a while in a bothy bag although it is a mystery how the wind didn’t deposit it somewhere in Norway. 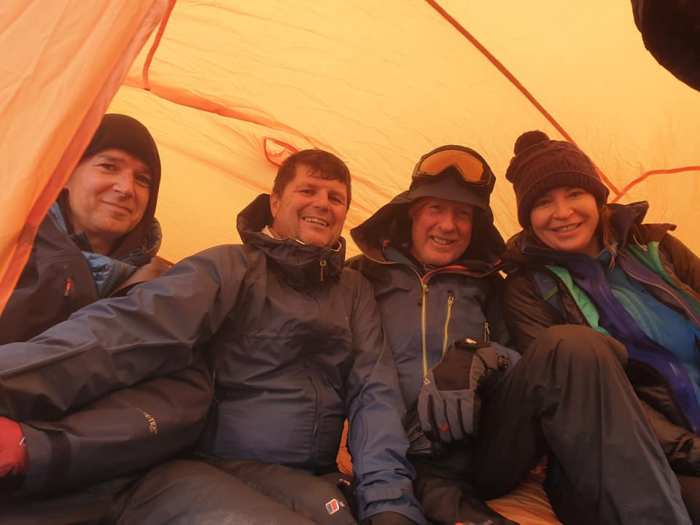 Reaching the summit was an exhausting effort and one or two admitted to feeling like a “burst ba’” when they eventually got there.

The traditional celebratory drink was taken at the cairn – in stark contrast to the previous occasion in 2014. 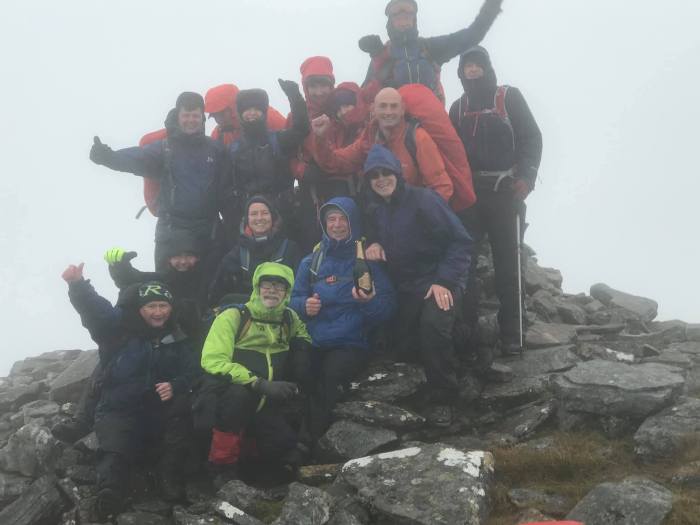 For mortals that would have been sufficient but for George and Susan there were other fish in the frying pan. Sgurr a Mhaoraich Beag lay a short distance away – once an official Top it had long since been demoted from the lists but George and Susan had ascended every other Demoted Top and this was to be their final one. Jason and John accompanied them on this ultimate venture. 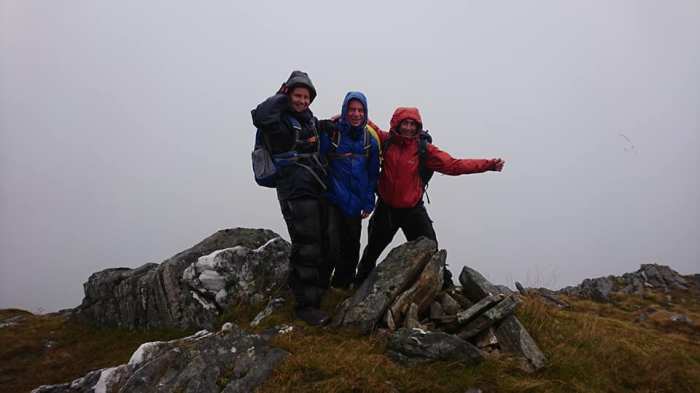 In the meantime everyone else walked, rolled, tumbled and slid back down the cars at the roadside.

Once back at the Hostel, with everyone showered, changed and fed it was just about time to get the party going. George and Susan were presented with bottles of spirits to enjoy at their leisure courtesy of the members.

Bill had spent the day at Glenmore Lodge back in the Cairngorms and he and Deb arrived in the evening to join in the fun.

Celebrating an achievement is never a problem for Club members and their guests and copious glasses were quaffed as the repartee flowed.

Gerry, Raymond, Norrie and Alyn, armed with their guitars and mandolin took turns in warbling some songs over the hubbub. The eyes and ears of the owners were never far away but decorum was maintained throughout the evening – the Chairman’s yellow card safely tucked in his pocket all night.

Conditions were slightly improved on the Sunday morning but there was no appetite by anyone to head out into the hills again and everyone made their way home to prepare for their next outing.