Glen Affric in the heart of Autumn can be one of the most breath-taking and scenic areas in the country – but if the weather doesn’t play ball then it can be lonely and dreich. As the Club prepared for a third visit to the magnificently located Strawberry Cottage at the west end of Loch Affric the members were obviously hoping the weather would behave – but the forecast wasn’t too encouraging.

Strawberry Cottage is not the easiest hut to get to, but its location is ideal for anyone wanting to tackle some of Scotland’s more remote mountains. Clubs hiring the hut are allowed to take up to two vehicles along the 7k land rover track to just short of the hut. The road is unsuitable though for cars other than 4x4s and as nobody attending had one, everyone had either to cycle in or use Shanks’ pony – or Shand’s pony in Norrie’s case. 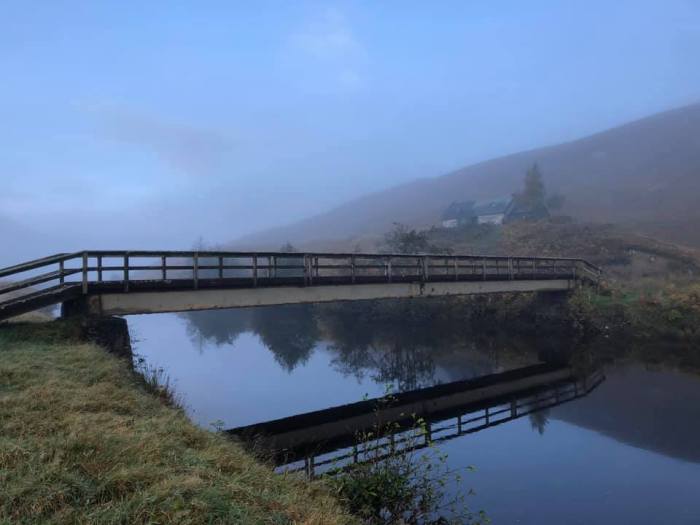 Nobody was able to do any climbing during the day but those who could, travelled up to the car park in daylight. Fortunately, the pay and display meters were out of order and everyone saved a few pounds – except for those who parked miles away to avoid the parking charges in the first place. George. Susan and Mike P cycled down in daylight whilst Norrie and John hoofed in separately. Unfortunately for Norrie he aggravated his by now legendary dodgy ankle which would put paid to him tackling anything too ambitious the next day. Mike L also cycled in having driven up that day from Lancashire. 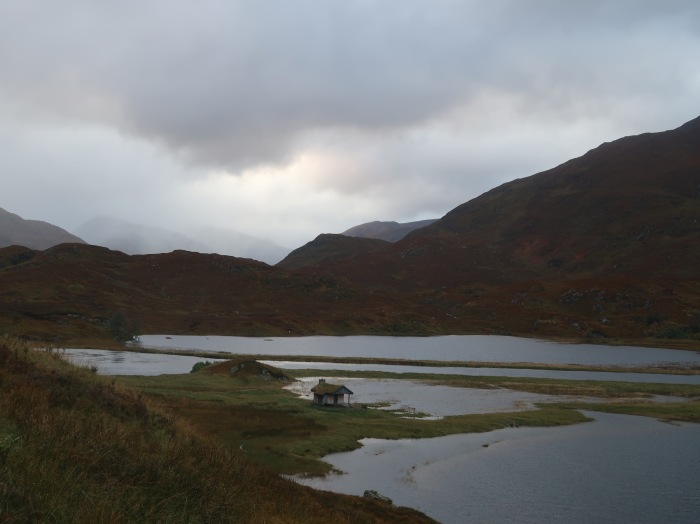 Raymond and James could have completed their cycle down in daylight but, according to Raymond, James takes more time to get ready in the car park than a teenager off to her first School Prom.

Those seven spent a pleasant evening in the cosy hut – George taking his stove duties as seriously as ever. It was a music free night though as nobody wanted to carry a guitar case down with them. Even James’ famed moothie failed to make an appearance.

Adrian and Ania were due to arrive at some stage but didn’t appear – the remote location’s lack of signal making communication a problem. It turns out that Adrian had visited hospital on Friday, fortunately for something that turned out to be relatively trivial. Plan B was to grab some sleep and drive up very early in the morning. The excitement kept slumber at bay however and they ended up driving up at night and after a couple of hours restless sleep in the car they tramped down to the hut with enough time for a cup of tea before setting off on their adventure.

Norrie had hoped to manage the ultra-remote Munro of Mullach nan Dheiragain on this trip , which was missing from his 2nd round but he didn’t think his ankle could take it. He quietly sipped his tea while everyone else got ready and headed out.

George and Susan headed south east to the accessible hills of Carn a’Choire Ghairbh and Aonach Shasuinn which were on their list of to-be-repeated Corbetts. These hills are visited infrequently, possibly just as well as George’s attire might have caused any fellow hikers to rub their eyes in disbelief. 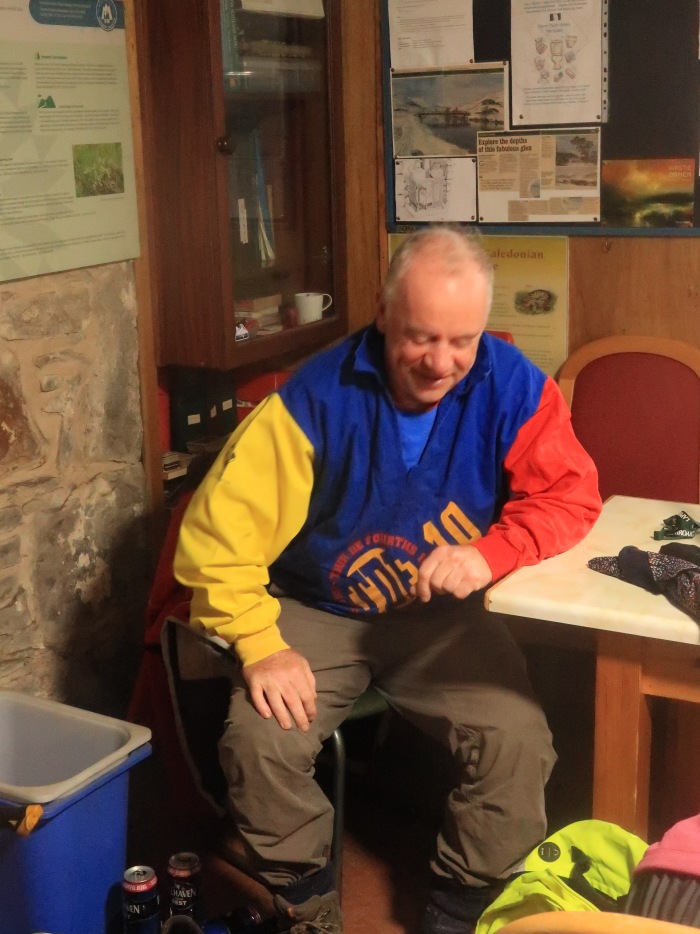 Their ascent up Carn a’Choire Ghairbh took them past a solitary elm tree nicknamed The Last Ent of Affric due its Tolkeinesque appearance. The 300 year old elm went on to win Scotland’s Tree of the Year in 2019. It is not hard to imagine the ancient Ent trembling in fear as it saw George approach. Fortunately the nearest saw was back in the hut and it wasn’t deemed to be blocking the view of the surrounding ranges. 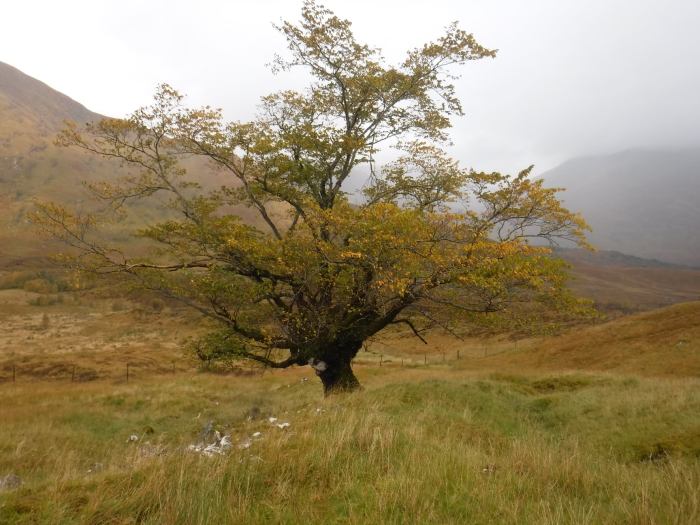 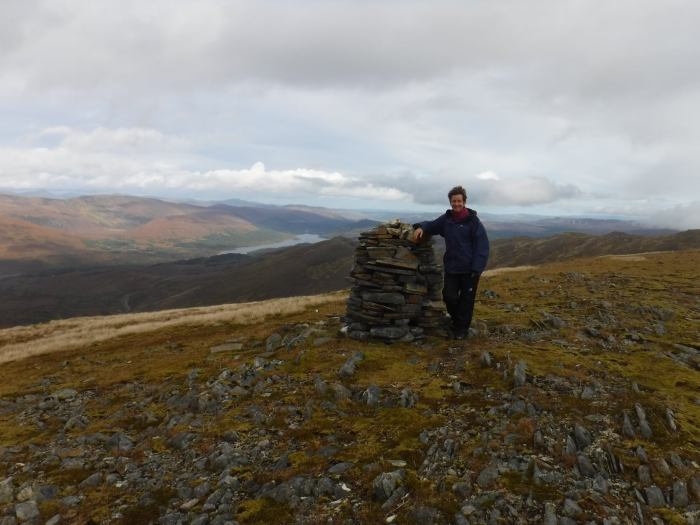 Climbing both Corbetts is a decent days walk and they eventually dropped down to the path south of Loch Affric and plodded back to the lodgings.

James and John set off and made their way along to the Altbeith Youth Hostel which sits in lonely isolation 5k further up the glen. They climbed the path north from the hostel  to the col where they met Mike and Mike who, having left earlier had already bagged An Socath to the east. 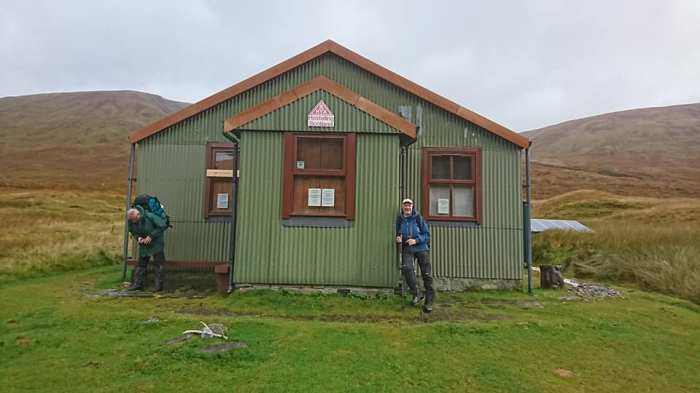 Mike Lever was making good progress on his Munro round despite living some distance from the hills and he was exceptionally keen to climb these remote peaks on this trip.

James headed east to An Socath while John teamed up with the Mikes and ventured west towards Sgurr nan Ceathreamhnan – a mountain as hard to reach as is it to pronounce. That was not their final destination though – the even more remote summit of Mullach nan Dheiragain lay several kilometres north east and there would be no rest until that peak was also bagged. 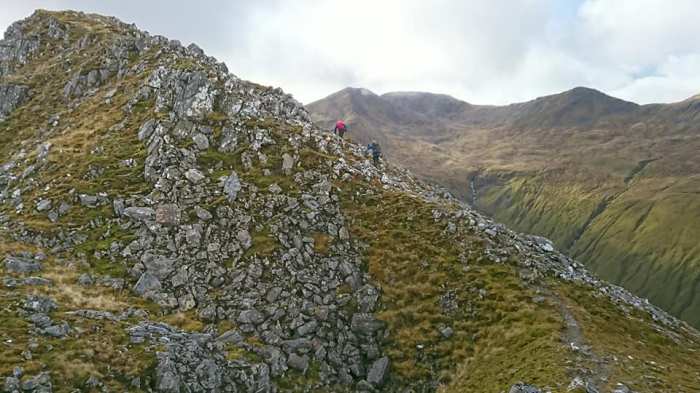 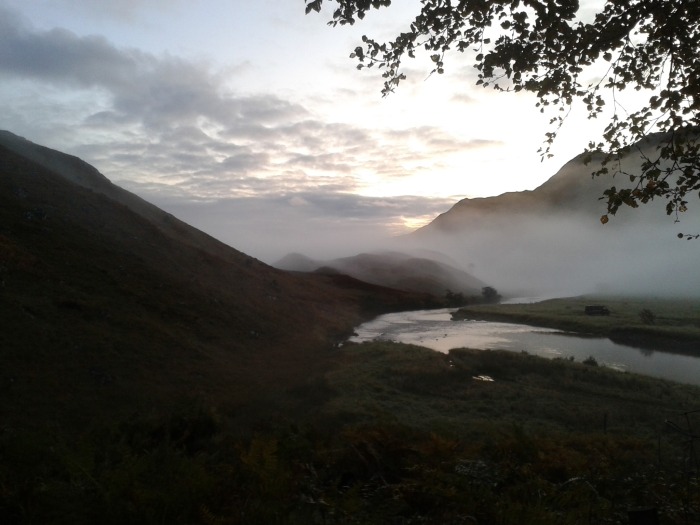 James early return to the hut gave him the opportunity to begin Chapter 1 of his “Introduction to Map-Reading” course.

Mike P was attending his first club meet as a guest and it transpired that he and John had shared a common past – both engaged with the Royal Fleet Auxiliary in the 1980s. It was highly likely they had both served on the same vessel at the same time. Not only that, one of Mike’s pals lived close to John and Mike had driven past his door on many occasions.

The chatter helped them gobble up the terrain towards their twin targets. The forecast for the day hadn’t been great but it could certainly have been a lot worse and at least visibility was OK.

Adrian and Ania decided to tackle the triple-Munro ridge of Carn Eige, Mam Sodhail and Beinn Fhionnlaidh. Although slightly nearer at hand, Carn Eige at 1183m is the highest point north of the Great Glen and requires to be re-ascended (or contoured) on the return from Beinn Fhionnlaidh. Despite getting slightly wet, they enjoyed their day and agreed the effort to get up there was worth it.

Raymond’s mission overlapped a bit with that of Adrian and Ania. He ascended Mam Sodhail by the Sgurr na Lapaich ridge. Carn Eige and Beinn Fhionnlaidh were also bagged before a craggy clamber eastwards to the Munro of Tom a Choinnich. As daylight faded, he dropped down to the path along the north side of Glen Affric before traipsing west, his head-torch guiding him to the hut.

In the meantime Norrie’s activities were restricted to a hobble around up past Loch Coulavie and the waterfalls plunging down from the rock slopes above. After a two hour shuffle he returned to the hut and passed the time offering tea and conversation to anyone who passed. A German couple who returned again and again to the Scottish mountains were the first to suffer his inane ramblings in return for a warm brew. Later a lady passed who with her husband was off to scatter her mother’s ashes in the vicinity of the Altbeith hostel. Her mother’s family had lived a harsh life in a croft in the area where the hostel now sits before they were eventually re-settled.  Their story was fascinating, not least the tale of the old patriach who waked, rowed and cycled his way to Cannich regularly to play fiddle at the Saturday night ceilidhs. 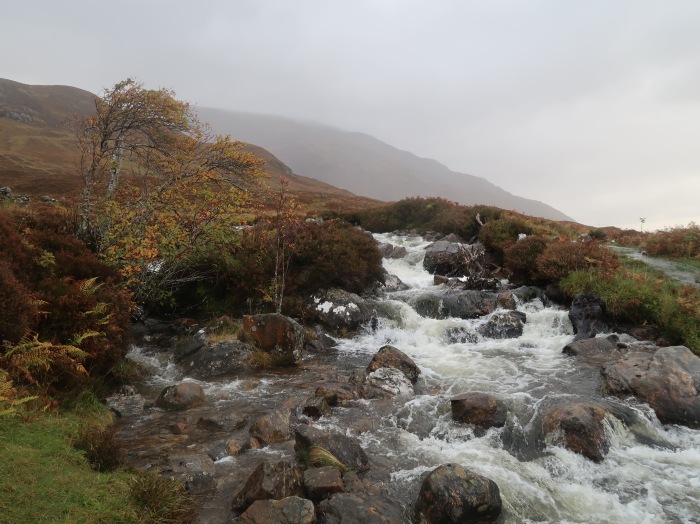 There was to be no ceilidh in the hut that evening though, but there was plenty of banter and chat around the fire as usual. Mike P must have enjoyed it OK as he immediately joined the club on his return to Edinburgh.There was no mistaking the hut as a florist shop as a pile of soggy boots were left to dry off in front of the flames.

As the hut directory was completed Raymond turned up evidence of a trip he made to Stawberry Cottage with club member Paul McGrandles and others back in 2001.

On Sunday morning, the walk/cycle back out to the car was utterly glorious. The early morning mist was gradually burnt off and the Autumn colours in the glen provided a dazzling display of gold and amber, copper and tan. It was truly a magnificent end to the weekend and hearts were lifted in preparation of the drive home.