The Club’s July meeting was scheduled to be based in another of Scotland’s iconic Club Huts. Strawberry Cottage, leased from Forest Enterprise by the An Teallach MC sits in a superb location five miles from the nearest public road at the western end of Loch Affric in Glen Affric, one of the finest and awe-inspiring locations in Scotland. Despite the remote location, the hut has electric (solar powered) lighting, gas cooking facilities and a wood burning stove. 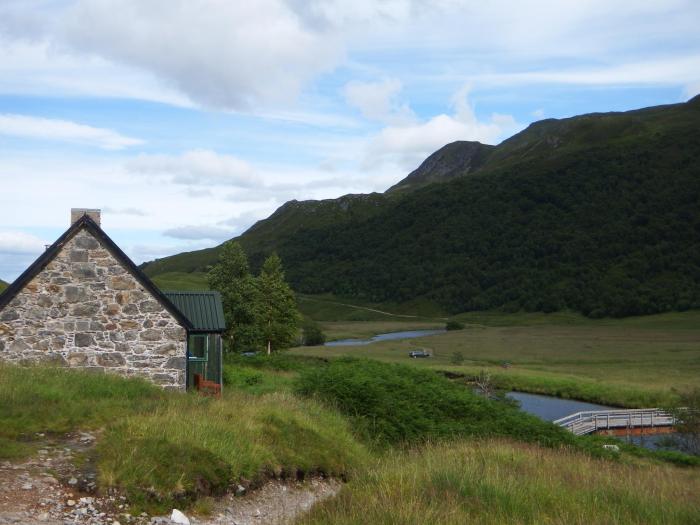 This was to be the first official meet for the new “international” member Jason Bostock who motored up from Lancashire in the downpours that drenched the country on the Wednesday. His initial destination was Glencoe where his target was the two munros at either end of the Aonach Eagach. Having camped at the site on the B 863 to Kinlochleven he was able to scoot up the north ridge of Sgorr nam Fiannaidh without any problem. Jason was understandably nervous about attempting the full traverse of the Aonach Eagach on his own – particularly as the swirling mist gave it an even more sinister appearance than usual. The solution was a descent back to his start point and a drive around to Glencoe where the other munro Meall Dearg could be tackled from the South. Although this avoided the traverse of the “notched ridge” it did mean that over 6000 feet of climbing was required. Job done, Jason drove around to Glen Affric on Friday to meet the others.

Ian Millar was also quickly out of the stalls. Having arranged with George to have some supplies taken in by car he travelled up on Wednesday by train to Inverness, then by bus to Glen Shiel. He had booked into Alltbeithe Youth Hostel for two nights – this hostel sits in glorious isolation on the route east from Loch Duich to Glen Affric. Undeterred initially by the unending downpours Ian set off up Gleann Choinneachain towards the Bealach an Sgairne and the route down to Alltbeithe. Unfortunately, the forces of nature finally dampened his hopes as well as his spirits and his socks as he reached a river (normally a modest burn) which was simply impassable. There was no option but to turn around and head back to Glen Shiel – fortunately he was able to move his booking to Ratagan Youth Hostel where a welcome shower (warm, this time) and supper was enjoyed. 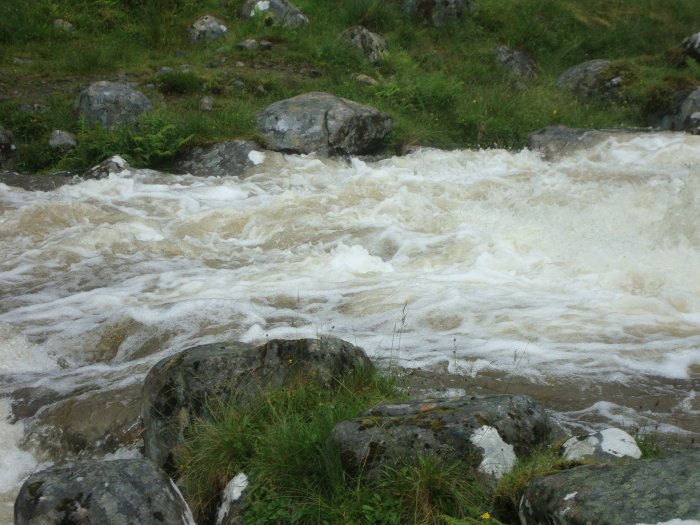 In true Robert the Bruce spirit he set off again the following morning with the far-off scent of baking scones encouraging his every step. This time he finally reached the sanctuary of Alltbeithe where, fortunately, Hannah, the warden had manged to save a few of her enticing scones to sate his appetite. An enjoyable evening was spent conversing with his fellow travellers and on Friday morning it was time to head for the hills. Heading straight up north from the hostel to the ridge ahead and a slight detour east saw him attain the munro summit of An Socath. The much more impressive Sgurr nan Ceathreamhnan lay a few kilometres to the west and soon he was headed for this classic munro summit – and beyond it to the West Top before dropping back down to the hostel, retrieving the rest of his stuff then shuffling off east the 5k to Strawberry Cottage to meet the others. 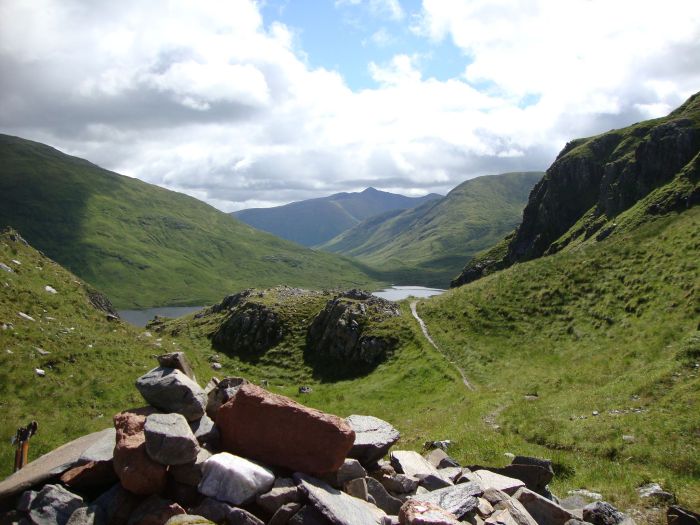 Susan, George and Norrie headed north on Friday morning having arranged to meet Jason at Chisholm Bridge by Loch a Beinn a Mheadhoin just east of Loch Affric. Norrie was planning a mega day on Saturday (subject to weather) and was content to have a short stroll on Friday while George and Susan tackled the region’s most easterly Munros, Toll Creagach and Tom a’ Choinich. Jason also was happy to have a “day off” after his exploits in Glencoe the previous day. Having driven down to the main Glen Affric car park Norrie and Jason spent an enjoyable couple of hours following the Affric Kintail way on the south side of Loch a Beinn a Mheadhoin before heading back to Chisholm Bridge where Jason got his bike out of his car and, armed with the hut key, cycled to track down to Strawberry Cottage to await the others.

In the meantime, Susan and George were having a great day on their two Munros in the glorious afternoon sunshine. These two hills may lack the rugged character of those immediately to their west but it is a very pleasant ridge between the two with superb views in all directions. 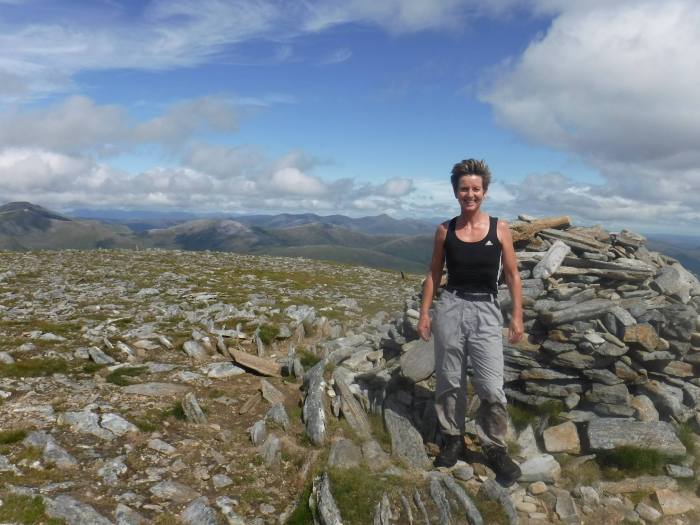 With the scent of a cold cider in their nostrils they soon bounded down and met Norrie in the car park. The padlocked forest gate was opened (keys having been previously sent for two cars) and they bumped and jiggled their way down the rough track to the hut with parking only a couple of hundred yards the other side of the River Affric from the hut. Once unpacked, refreshments were duly taken.

A couple of hours after the group arrived at the hut, a couple of dodgy characters were spotted through the window scrabbling around in the undergrowth by the river. On closer inspection it turned out to be Raymond and Jim who had paddled the length of Loch Affric in Raymond’s canoe and were now in process of lugging it up to the hut. Without a doubt, theirs was the finest approach to Strawberry Cottage – despite the canoe sitting very low in the water due the extreme weight of “essential supplies”. 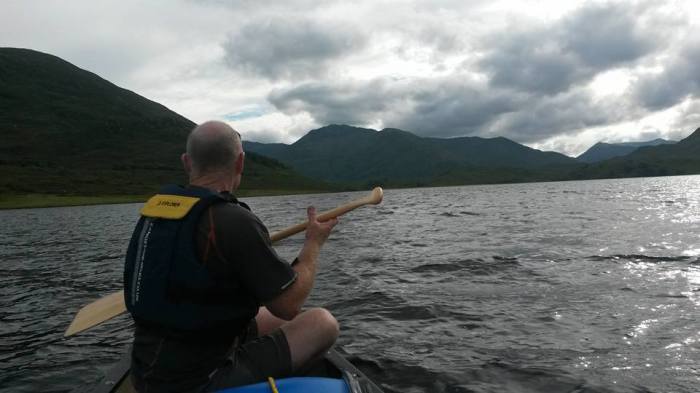 With Ian having completed his traverse over from Alltbeithe, Ally and Rowena arrived not too long afterwards having driven the second permitted car in from Loch Affric. Neil was the last to arrive, like Jason choosing to make the trip down the track by cycle – although in his case carrying all his weekend necessities with him in his rucksack/panniers.

A very convivial evening followed. No musical instruments were present but some accapella hollering rang around the hut late into the evening – particularly an improvised “Still Haven’t Found What I’m Looking For” with additional verses made up on the spot – and a passionate if under-rehearsed rendition of Thunder Road by the G Road Band. No doubt the highlight though was Jason’s brief but scarily hypnotic reprisal of his rave dancing past.

With rain forecast to come through on Saturday afternoon Norrie was determined to make the most of the dry weather and stumbled out of his kip just before 5.00 am. Susan, much less hungover also wiped the sleep from her eyes and got ready. With much more persuasion George was then roused from slumber – he managed to sleepwalk into his hillwalking gear and like a scene from “Thriller” the three were meandering along the path westwards at 5.15 am.

A boggy traipse up to ridge followed with a turn back east past a cairned top and well-constructed shelter to the top of Mam Sodhail with its magnificent summit cairn. 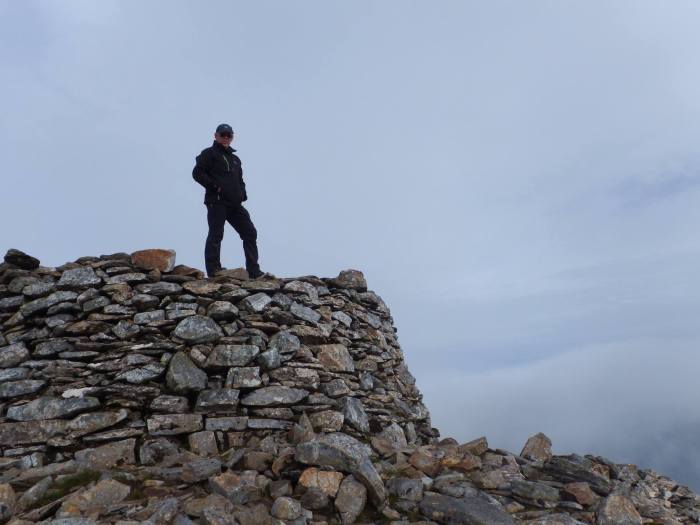 From there it was a short climb down and up to Carn Eighe the highest mountain north of the Great Glen (though only a couple of metres higher than its near neighbour). A couple of kilometres north over an intervening top lay the outlying Beinn Fhionnlaidh and soon the three were scurrying towards its summit.

With the hut around 10km away they began the reverse journey contouring around the main summits on their way back. At one point Norrie experienced the dreaded “Elvis Leg” as his lack of food intake saw him completely run out of fuel as his engine stalled. A couple of brownies and flapjacks later he was back on his way, though still trailing George and Susan by a kilometre or so. The Hendersons ploughed on up An Socath but Norrie had decided to call it a day and commenced the long descent back to the hut including an attempted shortcut over some even boggier terrain. 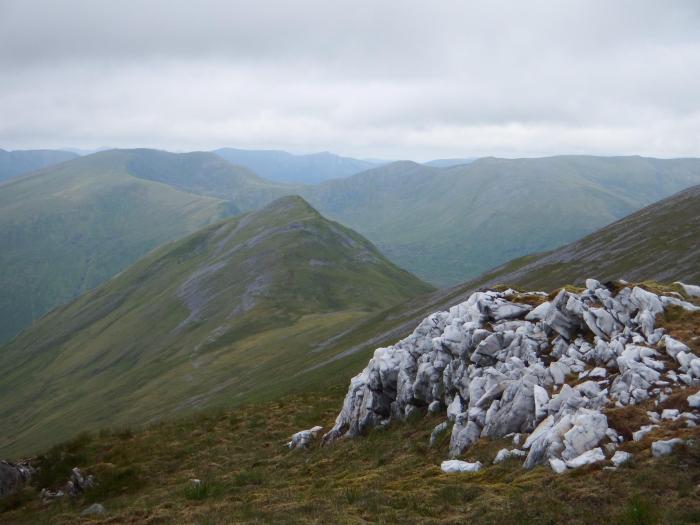 George and Susan caught him up before they reached the hut and at about 3.30 pm in the afternoon the three crawled back into their sleeping bags to catch up on some missed sleep – remembering to set the phone alarm to 4.45 pm ensuring they woke up before the McGrandles Cup clock started ticking. As it happened, the weather had stayed fair and their early start was not really necessary.

Ian Millar had planned a relatively modest day after his previous exertions and he headed north east from the hut then north west up the Coire Leachavie to attain the summit of Mam Sodhail by that route. The onward journey to Carn Eighe was completed but the prospect of continuing to Beinn Fhionnlaidh was declined and he gently ambled his way back to the hut.

Rowena and Ally had their sights set on the twin Munros of Mullach Fraoch Coire and A’ Chraileag to the south of the River Affric. A possible continuation to Ciste Dubh was considered but this would have involved a considerable decent and re-ascent and in the event they sensibly declined this extension of their day. The had an enjoyable climb up the ridge to the first munro before following the narrow ridge south over a subsidiary top to the summit of A’ Chraileag with great views over to the South Glen Shiel ridge. This summit also boasts a magnificently huge summit cairn – which only a bumbling amateur could fail to find even in misty conditions……..

The remainder of the group – Jason, jim, Neil and Raymond had their compass pointing west as they set off for the magnificent bulk of Sgurr nan Ceathreamhnan and its Munro neighbour Mullach na Dheiragain. Raymond also had his sights set on the fine little Corbett of Sgurr Gaorsaic which sits above the lochs that feed into the Falls of Glomach. It didn’t take them long to stride along to Alltbeithe Youth Hostel, the point at which the bearing was changed to North and they set off up the path onto the ridge.  Between misty interludes, the extensive views were soaked in and the long trek out to Mullach na Dheiragain was no more than a pleasant stroll, with Raymond having detoured to bag his Corbett. 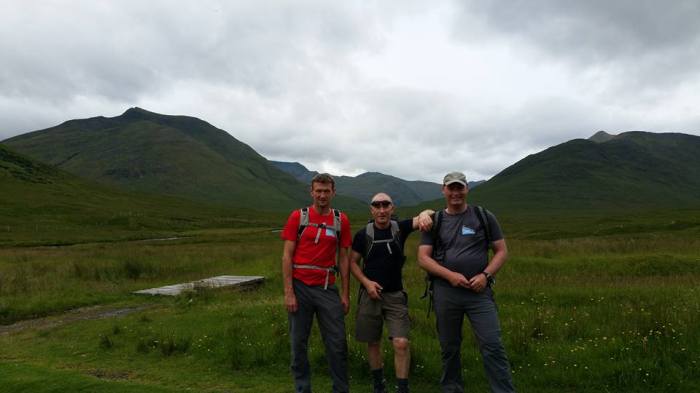 Not surprisingly, this group were last to return to the hut with Neil some way behind the others as he decided to stride over An Socath on his return.

Jim, Raymond and Jason elected to wash down in the River Affric – although Jim and Raymond’s front crawl was slightly more impressive than Jason’s “grandad paddle”. Jim’s leap from the bridge into the river did earn him a retrospective yellow card from the absent H&S Manual waving Club Chairman.

On the way back to the hut though, Neil had missed the turn off down to Strawberry and wandered along the north shore path for a few hundred yards. Having duly ‘fessed up later, a jury of his peers sat to determine whether this mishap was enough to earn him the wooden compass. The case for the defence was flimsy to say the least and unanimously the decision was taken to make the award to Neil.

Adrenalin (and in some cases an afternoon nap) was enough to keep everyone awake past the midnight hour so the McGrandles cup was withheld once again. With no accidental wet feet reported, the blue flipper once again also remained unwrapped.

With everyone having had a fairly long day on Saturday, nobody was inclined to any more climbing on Sunday morning. The two cars were packed and Neil and jason headed back to the car parks on their bikes. With their load a bit lighter (though apparently not quite light enough) the Last of the Mohicans aka Jim and Raymond set off once again for the long paddle up the loch back to their car.

All in all, another great weekend was enjoyed and Strawberry Cottage has already been pencilled into the calendar for 2017.