One of the most eagerly anticipated meets on the 2015 calendar was the Clubs visit to the CIC Hut, Ben Nevis on the 18th and 19th of September. This SMC hut named in memory of Charles Inglis Clark who was killed in the First World War is superbly located at a height of 680 metres, sitting below the great cliffs of the Ben’s North Face. 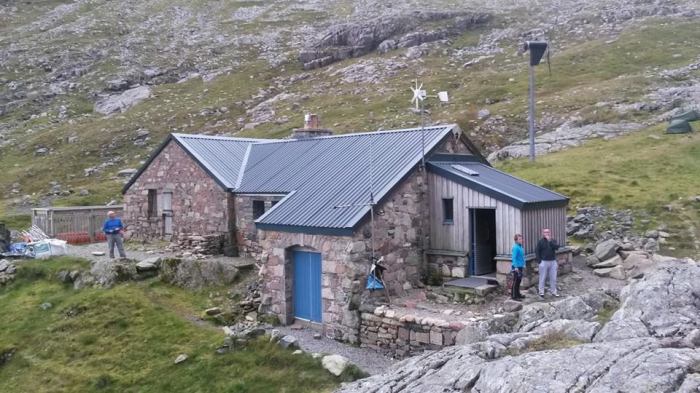 The hut is very well maintained with excellent cooking and sleeping facilities, gas heating and water taken from a standpipe outside the door. The Hut is busiest in winter when the snow and ice climbers strut their stuff so there was no problem fitting in the eleven club members who attended.

Unfortunately both Logan Fraser and Jim Hughes had to drop out at fairly short notice.

The Scottish weather can be very fickle anywhere in the country – and in Coire Leis even more so but the forecast was promising and optimism was high as bags were packed on the Friday morning (or the Thursday night for the organised amongst us).

There had been much discussion beforehand regarding what we should do – and it was fairly unanimous that the Ledge Route should be undertaken if conditions were favourable.

By way of an aperitif on Friday morning, George, Susan and Norrie headed up via the Munro of Geal Charn by Laggan Dam. The weather was fine as they traipsed up Glen Markie then following a burn up onto the expansive summit plateau. This hill’s best feature is its isolation and great views in all directions were heartily gulped in before a fairly direct and sharp descent was “enjoyed” back down to the glen. 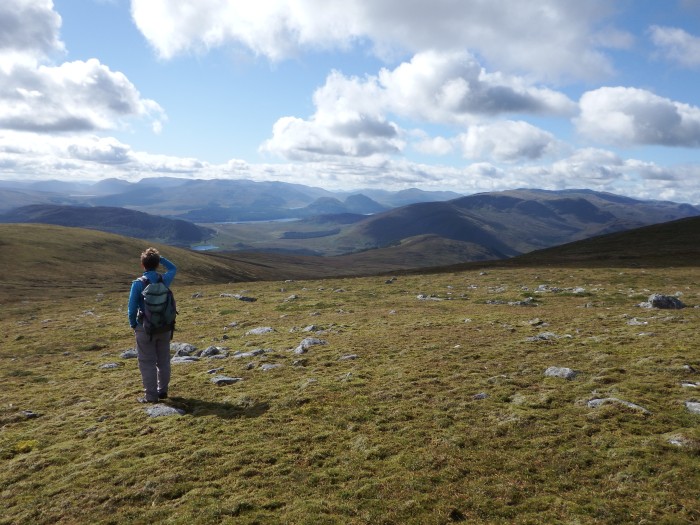 A quick refreshment and some nourishment taken they were soon at the Ben Nevis North Face car park where Paul and the Ians had already parked up and headed up the five km track to the hut. The path has been upgraded relatively recently and in the late afternoon sunshine the walk in was a truly joyous experience despite having to carry weighty packs bearing all the weekends essentials.  A basic schoolboy error was made though in nominating Norrie to carry in the key to the hut as he was the coo’s tail again trudging up the final few steps while the others waited patiently.

Before too long Jim, James and Blair arrived although by this time head torches were required for the latter half of the walk in. Unfortunately, young Blair who had been sent back to the car to retrieve something after a few hundred metres of the walk in took the wrong track when trying to catch up again with Jim and James and thus ensured that the Wooden Compass would once again be returning to its ancestral home in Tillicoultry.

Rowena was not due to arrive at the car park until 8.00 pm – and with Ally unable to make the meet, the gallant Raymond demonstrated that chivalry is alive and well in the 45 Degrees MC by waiting to accompany her into the hut by head torch. A scurrilous rumour later emerged of a navigational error – but this was strenuously denied by both and the name “Fraser” once again featured on the honours board.

A fine evening ensued with just enough refreshment taken to ensure a good night’s sleep. No musical instruments were hauled into the hut – save for Ian Millar’s moothie – so the singing was restricted to some harmonious acapella numbers, or at least that is how they sounded at the time. The night sky outside the hut was ablaze with stars and the lack of clouds promised a fair morning ahead. 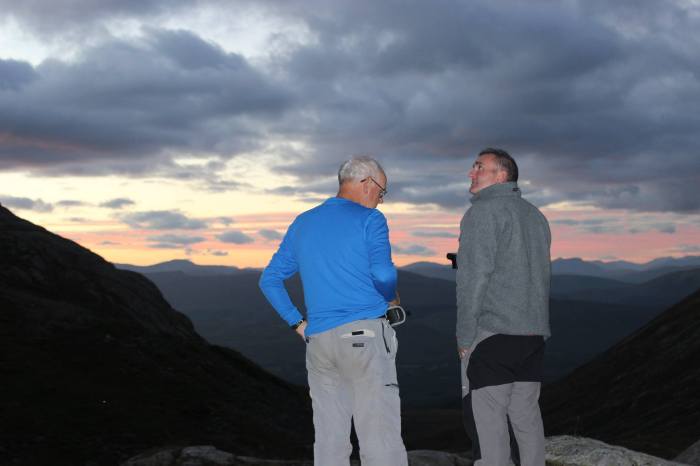 Very late in the evening a pair of fine lads from Aberdeen arrived at the hut just as a couple of members were slipping gently into dreamland. They too had plans to ascend the Ben by the Ledge Route.

The next morning greeted us clear and bright with golden rays of sun striking the upper North Face as a stunning temperature inversion engulfed the valley below.

The sense of anticipation and excitement grew as hurried breakfasts were scoffed so that we could keep to our early (for us) start of 9.00 am. The Aberdonians had already set off as the 45 Degrees 1st XI began their trek up to Number 5 Gully.

A short way up this rocky gully the beginning of the Ledge Route shows itself initially on a fairly easy angled ramp to the right. When wet and slippery this first ledge might deter climbers as proper holds are scarce and a slip would have very serious consequences. However, we were blessed with clean dry rock and no problems were encountered in clambering up this section.

At this point we again met the Aberdonians who had since teamed up with another solo walker – they had missed the turn off to the next section of the ridge and were retracing their steps. We soon agreed the right way to go and off they shot off into the distance again.

As we ascended we were eventually able to peer back down into the gaping chasm of Number 5 Gully and ahead the ridge looked exciting and inviting as it stretched up skywards all the way to the summit plateau. Some prominent rock features provided an opportunity too good to be missed for some blatant posing. 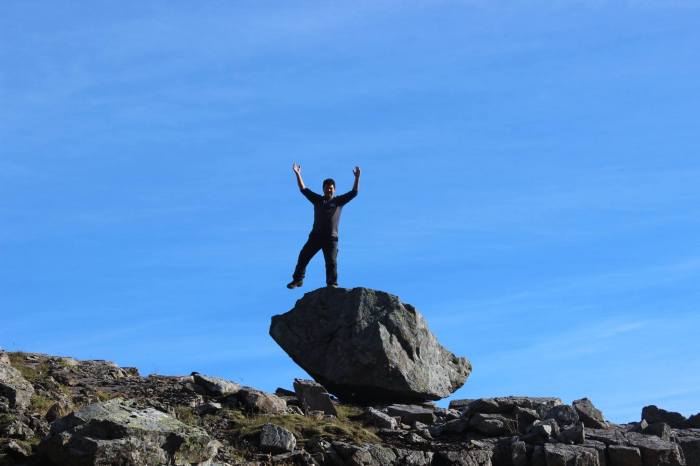 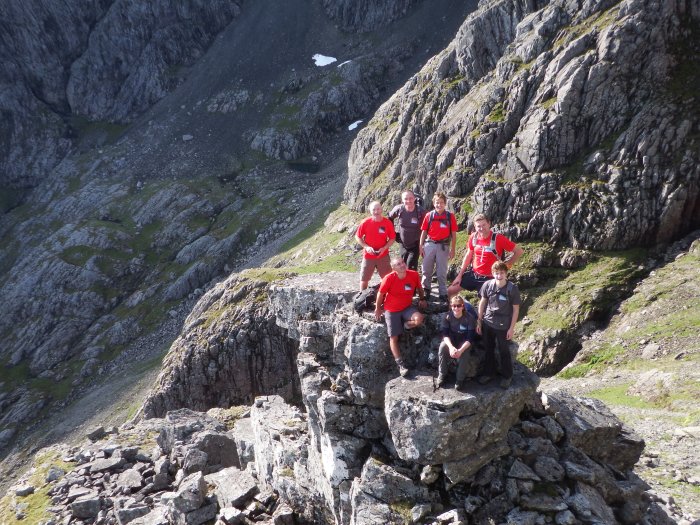 As we gained more height, still in the glittering sunlight, the cloud in the valley had continued its ominous creep up the glen, slithering maleficently into the Ben’s gullies and sliding up the slopes of Carn Mor Dearg opposite. The conditions made for a truly exceptional scramble up the remainder of the Ledge Route with the views over the sinister mist-engulfed gullies etching themselves in our minds for a very long time.

The climbing itself was fairly straightforward but the setting ensured that it would not be forgotten easily. In all too short a time we had reached Carn Dearg – a “Top” of Ben Nevis, where the Ledge Route meets the summit plateau. By this time the rising mist had caught up with us but nothing could dampen the spirits after such an exhilarating scramble. 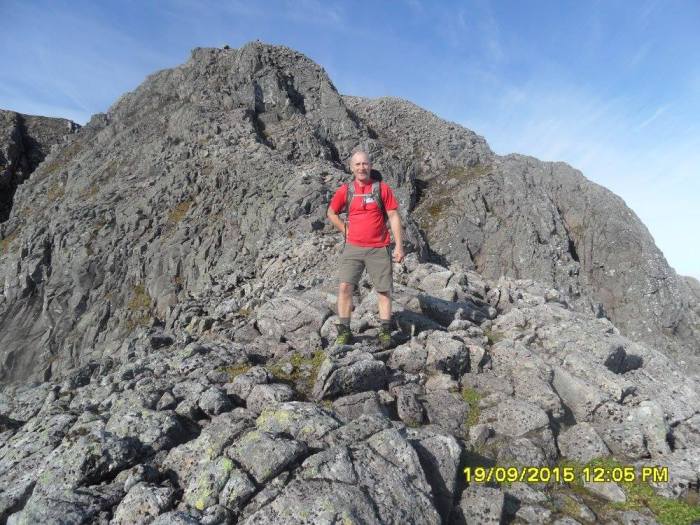 A path was followed round towards the summit eventually meeting the “Tourist Route” where scores of day trippers and charity walkers were slogging their way up to the highest point in the British Isles. Although none of us would have swapped places with them, it would have been wrong to show any disdain for their efforts and they too were rightly elated when they finally reached the summit.

On the misty summit amongst the hordes, our group claimed its two minutes on the summit cairn for some classic team photos. 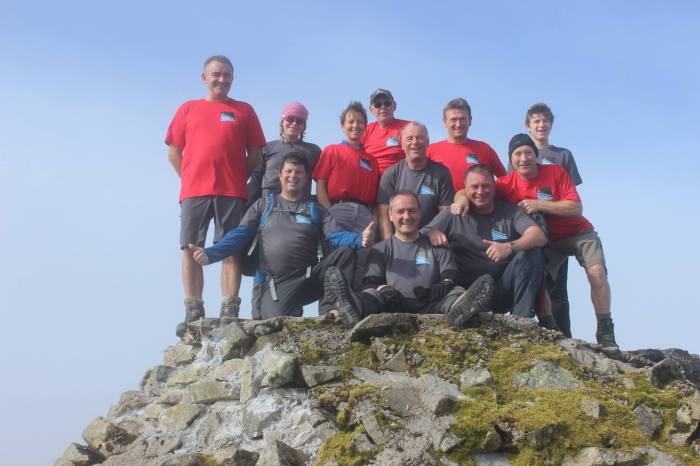 After a quick snack, it was time to head off to the arête leading to Carn Mor Dearg. A few hundred yards from Ben Nevis’ summit the mist sank once again below the plateau and we were able to gaze far into the distance over a sprawling sea of cloud. A few of the party – including those who had not had a view from the top of Ben Nevis previously, headed back up to the summit. The mist returned once again however but they were rewarded by a spectacular views of Brocken Spectres – a first sighting for some and captured by them on camera. 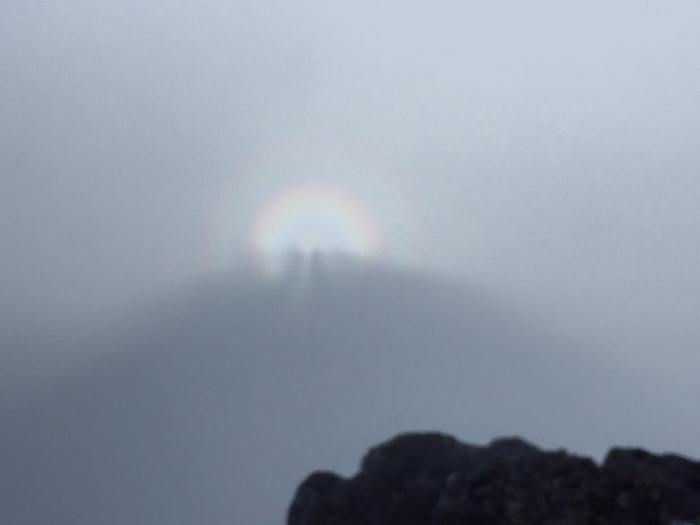 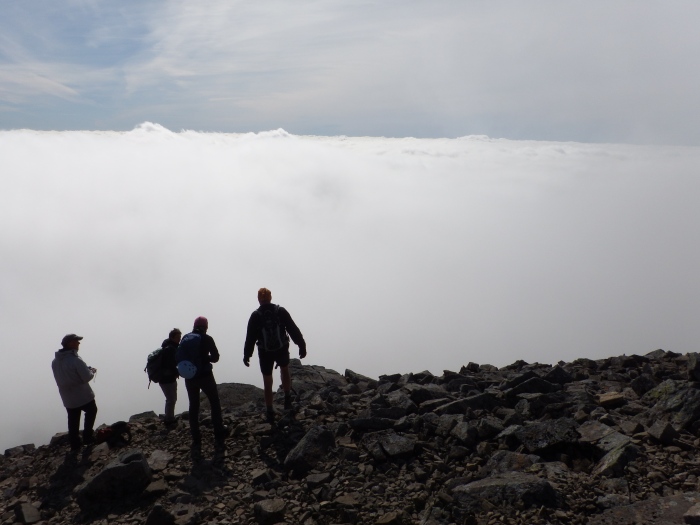 With the inspection of the Brock completed (are you reading this Paul?), we were soon all on the arête where we met quite a few people heading up from Carn Mor Dearg to the Ben. Everyone’s spirits appeared to be high – it was a great day to be out in the mountains.

Having skipped merrily along the arête, the summit of Carn Mor Dearg was reached a short time later and once again sustenance was taken.

At this point it was realised that there might have been a bit of a miscalculation as far as supplies were concerned and a trip down to Morrison’s in Fort William would be required to ensure that our great day was celebrated with sufficient salubrity to mark the occasion. Fortunately, Ian Pollock’s euphoria was at a high enough level that he didn’t complain too much when press ganged into handing over his car keys and debit card to volunteers Jim and Raymond who had by now emptied their rucksacks into the others’ packs to ensure they had sufficient capacity to complete Operation Kerry Oot successfully.

Raymond and Jim were soon jogging back down the ridge to the Car Park to great gratitude from the group and great fear and trepidation from Ian as he speculated what might appear on his next bank statement. Although Jim and Raymond weren’t entirely sure what kind of car Ian had, there was reasonable confidence that his would be the only one in the Car Park with a single blue flipper on the back window ledge.

From the summit of Carn Mor Dearg it was a steep but short descent directly back to the hut – where we found the hut convener and his companion carrying out some malodorous but essential maintenance. At this point, as Jim and Raymond had not yet returned, Paul was forced to take his refreshment from a tea-pot. A sight not previously witnessed by most club members.

A convivial chat with the convener ensued and it transpired that he had a stock of beers stashed in the hut loft – albeit that the “best before” dates were well prior to formation of our Club. Nevertheless, negotiations completed, we were able to enjoy a beer or two while we waited for the “runners” to complete their journey back up the track to the hut.

The heroic pair soon arrived back with the emergency rations – and having met the convenor and his friend walking out, they were not too surprised to see us supping our ale and grinning happily. At this point both Jim and Raymond decided their sweaty efforts required a shower under the standpipe which draws cold water from the nearby burn.

Opinions differed as to whether Jim’s wash down most resembled the Gamekeeper Mellors from Lady Chatterley’s Lover – or Gollum from The Lord of The Rings! 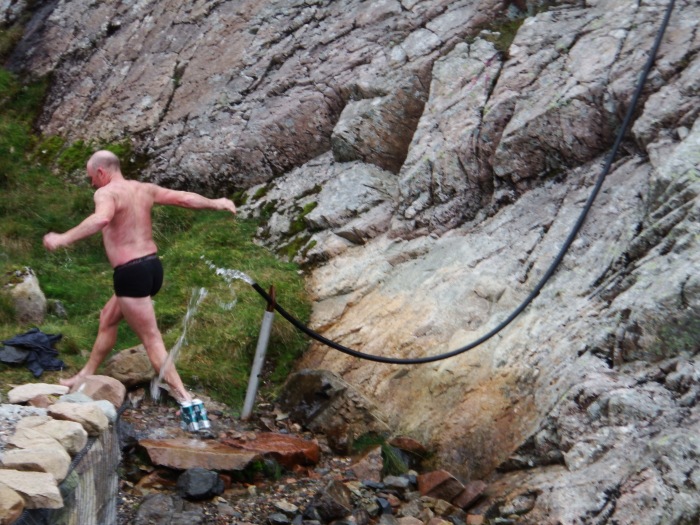 With a long evening ahead, and even the replenished supplies unlikely to last until midnight, it was decided to undergo a bit of abseil practice on the rocks outside the hut. James had brought the equipment in and some of the members had had very little – or in Norrie’s case no experience whatsoever – of abseiling.

Paul and James adopted the leaders’ roles and for the next thirty minutes or so various members took turns in guiding themselves down the rock in classic style suitably harnessed up. There was much hilarity at some of the beginners’ efforts and stylistic approach but the practice was very welcome.

Eventually the group returned back inside to continue the merriment – punctuated by a short visit (for a welcome cup of tea) by a couple of young lady climbers who had spent a long and exhausting day out on the North Face.

Such a long day and ample supplies of refreshing liquid ensured that there was a packed grid in the line-up for the McGrandles Cup. There was a smooth start and the field remained tightly bunched throughout until Jim Aire, clearly soothed to near-oblivion by his rendition of the Cliffs of Dooneen, slipped softly to sleep and the coveted mug was presented to him as the chequered flag fluttered alongside with midnight approaching.

The walk out the next day was once again undertaken in excellent weather but having taken the best part of two hours to get back to the Car Park, nobody was in the mood to tackle any more hills that day. Everyone duly headed home, their spirits still high following another truly epic weekend.