For our March meet over the weekend of 20th and 21st we were booked into the Grampian Club’s hut at Inbhirfhaolain in Glen Etive. For some of us the hut was as difficult to locate as it is to spell although it is actually well enough signed. The hut perhaps lacks some of the mod cons of some others but the location is absolutely superb and the lack of running water and conventional toilet facilities was a small price to pay for accommodation in such a fantastic location with numerous hills on our doorstep.

We also had two guests on Friday night: Ian Millar and Ian Pollock and two on Saturday night: Rowena Hepple and Alastair Shaw.

On the Friday, George and Susan initially met up with Norrie at Lix Toll Garage, near Killin on the A85 to try and catch a view of the much publicised solar eclipse. Although it was cloudy there was enough of a break to catch a glimpse of what all the fuss was about. 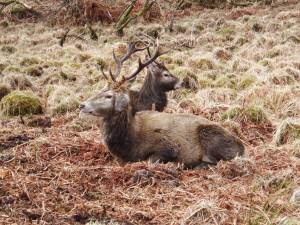 After a brief unloading at the hut, the three of them set off for the Corbett of Beinn Maol Chaluim initially through the forest path from Invercharnan, 2k south east of the hut. Friday’s forecast had not been great but conditions were not too bad. There was clear visibility all the way up the even angled ridge and on to the long summit plateau, but unfortunately Bidean Nam Bian and the other giant Munros remained covered in cloud.

The walk back along the plateau was very pleasant and they were soon back in the forest and heading back to base armed with dead wood ready to chop and get the stove lit in preparation for the others arriving. 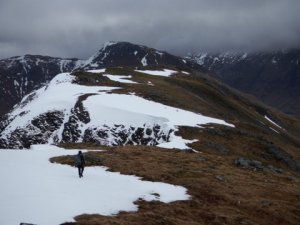 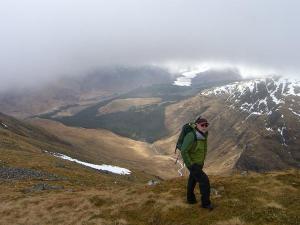 The other members soon arrived – Raymond having run 20 miles along the West Highland Way from Tyndrum to The Kingshouse in preparation for his forthcoming big run. The early evening entertainment revolved around James’ historical (and sometimes hysterical) photo collections of previous mountain trips. In the past James and Paul seemed to enjoy walking bare-chested in the hills but fortunately for the hillwalking community they mostly now elected to remain suitably covered up.

Not long after, Ian and Ian appeared. Following introductions (only George and Susan had previously met them) we all settled down for a few drinks before eventually the guitar was fetched from the car and Norrie and Raymond alternately led off on a few old (and new) favourites.

Jim retired first having announced that he intended rising early to tackle the five Munros in the Ben Starav group. At this point Paddy Power announced that would be paying out on bets for Jim to win the McGrandles Cup. The remainder decided that they would go for the two most easterly Munros in the same group – Meall nan Eun and Stob Coir an Albainnaich. This relatively relaxed prospect allowed for a couple more drams before heading up to bed.

Jim had already departed as planned when everyone else got up on Saturday to get ready for the walk. The preparations were interrupted though by loud wails and screams of anguish from the vicinity of the “long drop” composting toilet. Norrie had decided to use the facility before heading off but unfortunately forgot that his camera was looped on to his belt and when he loosened the belt, gravity took over and the camera slipped off. Certain that it had landed in the unthinkable, his howls of despair bounced off every mountain in Glen Etive. James immediately set to work manufacturing a retrieval tool with a broom and a coat hanger whilst others suggested grabbing an ankle each and lowering Norrie into the mire – anyone who has seen the film Slumdog Millionaire could see the potential. Anyway, a second look revealed that the camera had just landed on the wooden floor and rolled to the side. Norrie’s relief was much greater even than if he had succeeded in the initial purpose of his visit.

It looked like being a fantastic day with blue skies and sunshine to the fore. Eventually the group set off and headed up Glen Ceitlein in the direction (more or less!) of Meall nan Eun. After some discussion and a bit of gadget-fiddling the group actually climbed up what transpired to be Meall Tarsuinn – the north facing slopes still being a bit icy in places. The extra distance wasn’t great but it did result in 100m of climbing that could have been avoided. The finger of blame was eventually pointed (perhaps harshly) at Paul as he was lead man and the wooden compass was later presented to him.

It was a pleasant walk though of just over 1k down and up easy angles to the summit of Meall nan Eun. Unfortunately George and Susan had family commitments that evening and had to descend at that point and head back home. After a bit of discussion Ian and Ian also decided to call it a day and they too made the descent and set off down the road.

Raymond, Paul, James and Norrie set off back over Meall Tarsuinn towards Stob Coir an Albainnaich and met Jim between the two hills. He had completed four of his five Munros and was looking remarkably fresh.

Raymond, James and Norrie decided to don crampons and head up a long snow filled north facing gully up onto the main Albainnaich ridge. Paul who was “travelling light” took a rockier route to the east of the gully. The snow was hard packed but the going was very enjoyable up until a final 20 foot ice wall at an angle of maybe 75 degrees. Raymond cut some steps to aid Paul’s ascent and following behind Norrie discovered that his micro crampons were not really designed for that sort of angle. After a couple of inelegant ice-axe arrests he finally succeeded in attaining the ridge and James followed on shortly afterwards. 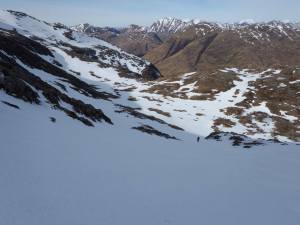 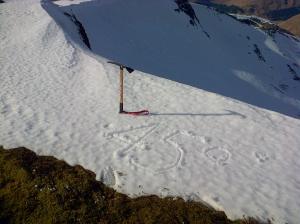 Once Norrie’s “Elvis Leg” returned to normal the quartet carried on up the fairly steep east ridge to the magnificent summit. The views were nothing short of sensational with blue skies and sun-kissed  snow covered mountains in every direction.

Several glissade techniques were on display as the group headed down to the col between Albainnaich and Ghlas Bheinn Mhor and then finally headed back out to Glen Etive down the (mostly boggy) path past The Robbers Waterfall. Paul and Raymond had ample opportunity to bask on the rocks by the burn as they waited for the slower paced James and Norrie to catch up.

Back at the hut Jim had completed his trek and had the stove lit and was enjoying a refreshing drink – it took very little time for the others to join him.

A couple of hours later Rowena and Alastair arrived having climbed Beinn a’Chaorainn and Beinn Teallach from Glen Spean earlier in the day. 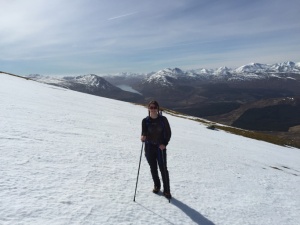 James, Norrie and George had met Rowena and Alastair in a Perthshire bothy in December and invited them along to the club meet. They clearly had some idea what to expect as they arrived with a case of beer, a bottle of Glen Livet 12 year old and a selection of song lyrics that they had printed out. Being a bit less experienced on the hills than the five club members, they were treated (if that is the right word) to quite a few tales of derring-do and disaster-dodging from the members’ previous exploits on the Scottish mountains. In accordance with custom the guitar appeared again and once more the vocal chords were exercised, stretched and strangled for the next couple of hours.

The highlight of this part of the evening was undoubtedly Jim’s acapella rendition of The Cliffs of Dooneen – never before in club history had a song been granted such reverential silence by the assembled company.

Eventually, despite Jim’s five Munro trek, Paul, coming up on the inside rail managed to fall asleep on his chair first and became the first member to win the coveted double of wooden compass and McGrandles Cup on the same meet. 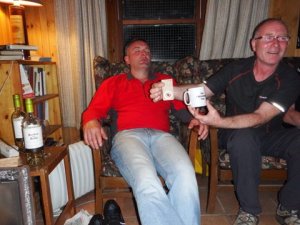 The hut was tidied on Sunday morning and the five club members all headed homeward. Despite the weather being much duller than the previous day, Rowena and Alastair decided that they would head for Buachaille Etive Beag to complete their weekend. However reports filtered back that Alastair was unwell during the ascent and the climb had to be aborted – suspicions were raised that this could have been a dose of maltitis de efteris which has afflicted most club members at some point or other.

All in all another superb weekend was enjoyed and already the days are being ticked off in anticipation of next month’s meet.