It had been anticipated that our May meet might have us climbing in something more akin to summer conditions, but winter had a sting in its tail and the Scottish mountains had a layer of new snow deposited at the end of April. The venue for the meet on 1st and 2nd of May was The Smiddy – the Edinburgh JMCS hut in Dundonnell nestling below the magnificent An Teallach. The hut sleeps a maximum of 10 and is pretty compact but had everything required with showers available at the Dundonnell Hotel just up the road. 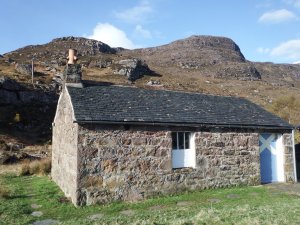 Norman and Jim Moon headed up on Friday morning north of Ullapool to climb what is many people’s favourite “wee hill” – Stac Pollaidh. This magnificent little gem offers entertaining scrambling over its many pinnacles and provides stupendous 360 degree views on a good day. Norman and Jim were well rewarded. 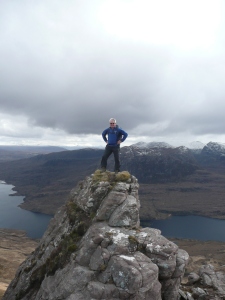 Also on Friday morning, Neil and Norrie met up with George and Susan in Inverness for breakfast (fried egg on a bed of lettuce anyone?) before heading west to the head of Loch Glascarnoch to climb the much maligned and much mispronounced Am Faoachagach. This Munro doesn’t feature on many calendars or biscuit tins but it is still well worth climbing for the excellent views and its sense of remoteness. A river crossing has to be negotiated on the ascent. Neil went off in search of the “Brigadoon Bridge” which may have existed in a previous century but certainly no longer did. Norrie’s inspired bin bag shuffle across the river proved to have been poorly researched while George and Susan managed to hop across some stones without getting their feet totally soaked.

The climb to the summit is very easy-angled and they were soon on top admiring the vista. George and Susan were keen to carry on to the Munros of Cona’ Mheall and Beinn Dearg. Neil and Norrie were undecided but headed down with them anyway to the wonderfully remote Loch Prille. The walk back from there looked unappealing so all four headed for the eastern ridge of Cona’ Mheall. A few hundred metres from the top conditions became a bit tricky with soft new snow sitting on an icy layer. Neil and Norrie decided to retreat at that point and headed back in the direction of Loch Prille before descending carefully to the Allt Lair and the long trek back to the car in glorious early evening sunshine.

George and Susan successfully tackled the tricky ridge and attained the summit of Cona’ Mheall before heading on to Beinn Dearg and dropping down to the Allt a’ Gharbhrain  arriving back at their car just before Neil and Norrie. The sun was setting behind An Teallach as they headed up towards The Smiddy. 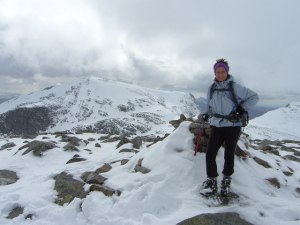 The others were all ensconced in the hut by the time they arrived at around 9.00 pm. The fire was going, glasses were filled and Masterchef Jim Aire supervised the heating of the pizzas and sausage rolls for the late arrivals.

An Teallach was always going to be on the agenda for Saturday and after some discussion it was agreed to tackle the mountain from NE to SW avoiding the potentially treacherous Corrag Bhuidh in winter conditions. There are few Scottish mountains, if any, that get the pulses racing faster than “ The Forge”.

There was time for a few songs before retiring for the night with Norrie on guitar being accompanied by some enthusiastic bodhran playing from Jim Moon.

Saturday greeted us with magnificent sunshine and the eager group were heading for the hill before 8.30. The path up from Dundonnell wasn’t as boggy as some had feared and it was pretty easy going up the Glas Tholl to the snow line at around 500m metres. A glance across to the north side of the corrie revealed some gargantuan snow blocks the result of an earlier avalanche – a reminder, if one was needed, of the care required in the Scottish mountains.

A rising traverse across the softish snow to the head of Glas Tholl finally revealed the breathtaking view SW along the striking pinnacles and gullies of this sandstone citadel.

A short descent followed by a steepish climb led up to Bidean a’ Ghlas Thuill at 1062 metres the highest point on An Teallach. A thrilling climb was celebrated by all with a warming sip of Glenlivet 12 yo.

After enjoying some time on the summit, Norman (who had to get back home that night) , Neil and Norrie decided that they were not going on to the 2nd Munro, Sgurr Fiona and made their way back down the ridge and back to the Smiddy.

The rest of the party “enjoyed” a very steep descent and equally steep ascent up the ridge to Sgurr Fiona. This Munro is a couple of metres lower than Bidean a’ Ghlas Thuill , but in many people’s opinion it is the finer summit. 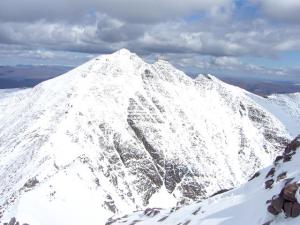 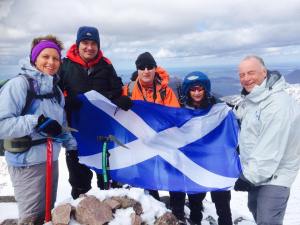 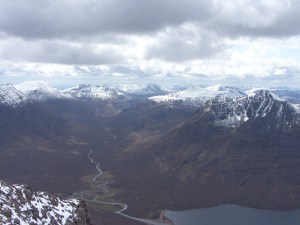 The two Jims, Paul and Alan enjoyed some bum sliding down the Coire Mor an Teallaich before heading back NE towards the Dundonnell Hotel and back to the hut – then back to the Hotel for a well earned beer or two. 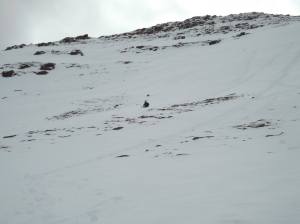 In the meantime George and Susan had their eyes set on the Corbett of Sail Mhor almost 5km from Sgurr Fiona. They made very good time as usual and eventually made their way down from this hill past the lovely Ardessie Falls where Norrie was waiting for them to drive them back to the Smiddy – after a pit stop at the Hotel.

All in all, the combination of snow, sunshine and one the most iconic mountains in Scotland ensured that everyone had a very warm glow at the end of the day, both inwardly and outwardly.

Just as well perhaps, but there were no navigational errors during the course of the day and the wooden compass remained held over until the next meet.

Everyone was a bit tired that evening not surprisingly and the usual Saturday night sing song never fully materialised. In the week before the General Election there was some inevitable political debate with Alan taking on the David Dimbleby role – fortunately it was not televised!

The only thing that remained was to see if the McGrandles Cup would be won or whether it too would require to be held over. Never one to disappoint, Paul eventually succumbed just after 11.00 pm to ensure that he retained the trophy.

The weather had begun to turn quite nasty later on Saturday evening and on Sunday morning there was no improvement. Any thoughts of doing any hills on the way home were soon discarded and everyone headed back home to the comfort of their own homes.