No Scottish-based Mountaineering Club’s calendar would be complete without a meet in Skye – and on 19th and 20th August the club booked into the fantastic Glen Brittle Memorial Hut situated right alongside the Cuillin Ridge.  Such was the demand that all eighteen available places were snapped up by members with a few guests also coming along for the ride. 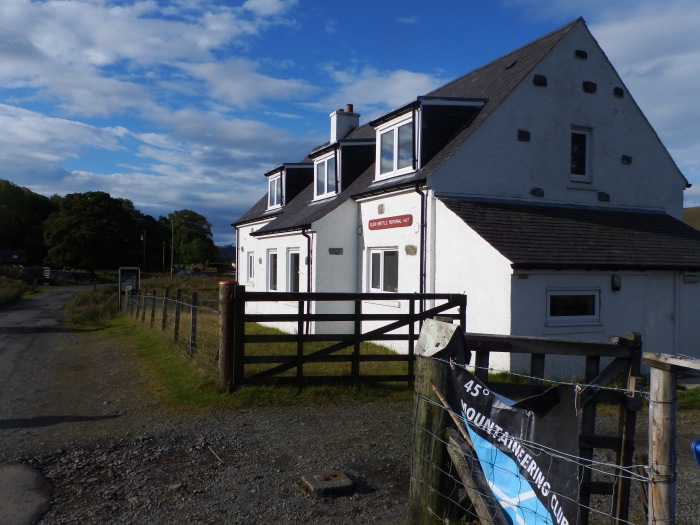 The Fraser clan were keen to get going and they set off for the camp site at the bottom of Glen Brittle, arriving on the Wednesday night. On Thursday they set off for the southernmost Munros on the ridge, Sgurr nan Eag and Sgurr Dubh Mor. The weather was warm and bright and their route took them up past Loch Coire a Ghrunnda which served as welcome swimming hole for James on the descent. Fortunately, no photographic evidence of this diversion has been provided. The three enjoyed a great appetiser for the rest of the weekend. 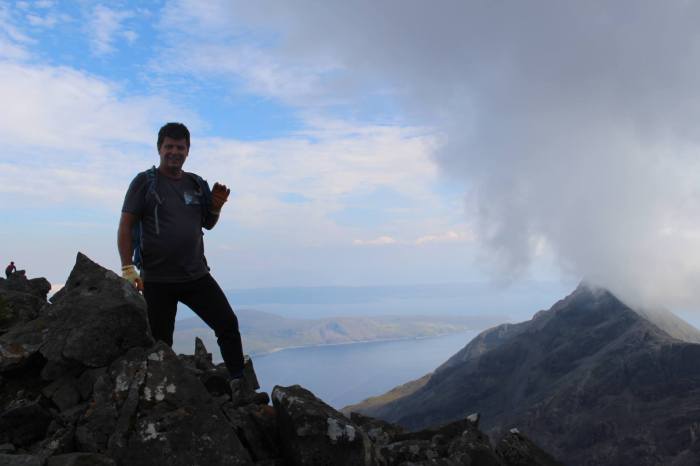 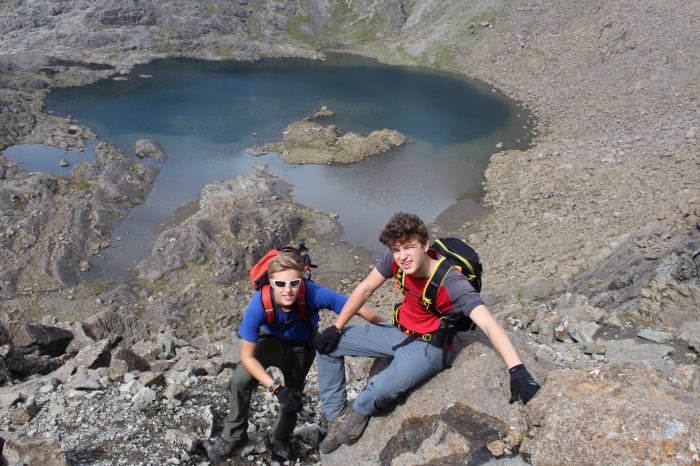 Not to be outdone, Rowena had also headed over to Skye as part of an advance raiding party on Wednesday night and on Thursday she climbed the magnificent Cuillin outlier of Blabheinn, also in glorious conditions. The view from this mountain’s summit is one of the finest in the country with a panoramic vista of the main ridge. 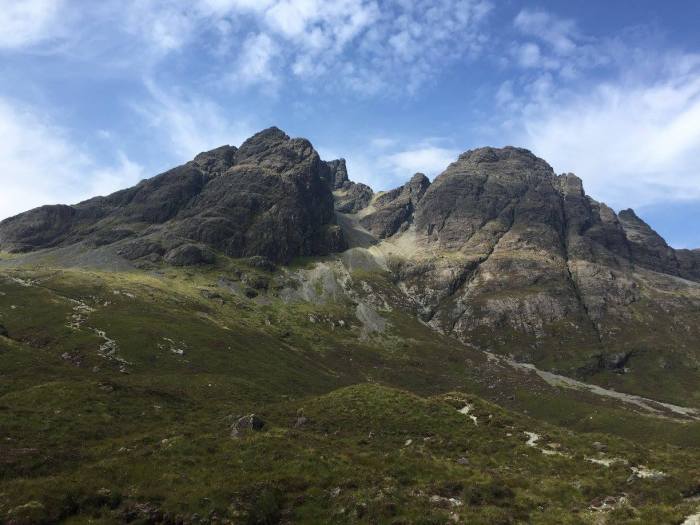 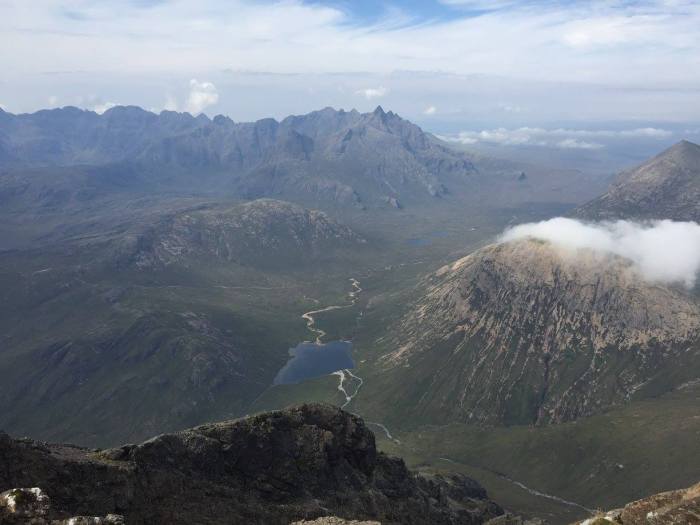 Jim and Paul headed north on Thursday but unfortunately their plans to get to Skye early were thwarted by a closure of the A82 due to a road accident. They got there finally on Friday morning having slept the night in the car. Raymond and Lorn had also arrived on Friday morning – and as tentatively arranged in advance the group proceeded up to An Dorus to climb the central Cuillin peaks of Sgurr a’ Mhadaidh, Sgurr a’ Ghreadhaidh and Sgurr na Banachdich before heading to the Inaccessible Pinnacle where they would meet with Susan, George and Norrie (who would be following closely behind them after an early morning drive up the road) – and Bill and Rowena. Paul had been suffering with a bit of a back injury and was unable to make the climb on Friday.

The first part of the plan went well with “Group 1” – James, Jim, Raymond, Blair and Logan – almost at the top of Sgurr a’ Ghreadhaidh as the Perthshire crew reached the summit of Sgurr a’ Mhadaidh. The weather at this time of the day was fine – but rain and high winds were forecast for later in the afternoon – and sadly, after traversing Sgurr na Banachdich both groups arrived at the Inn Pinn as the rain and high winds materialised. Rowena and Bill arrived shortly afterwards. Alan had attempted to join them on the walk up from the hut, but sadly his injured knee was causing him too much pain and he had to hobble back to the hut. 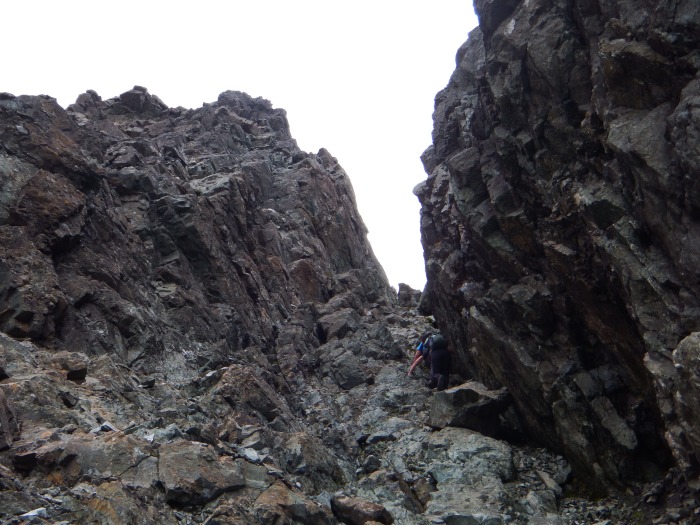 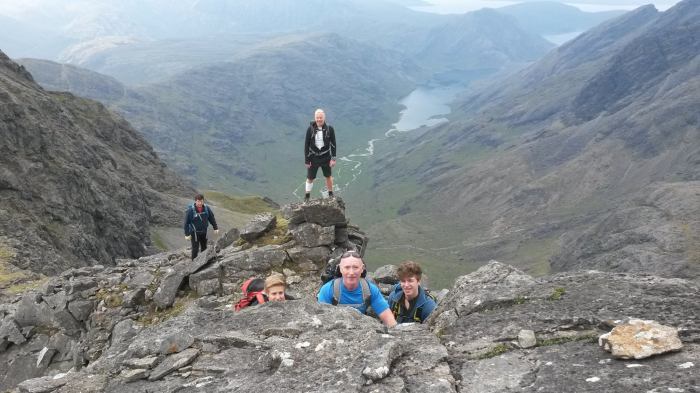 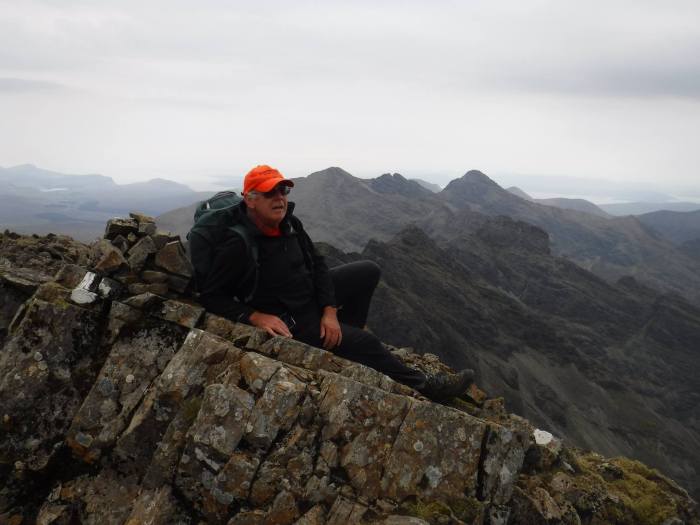 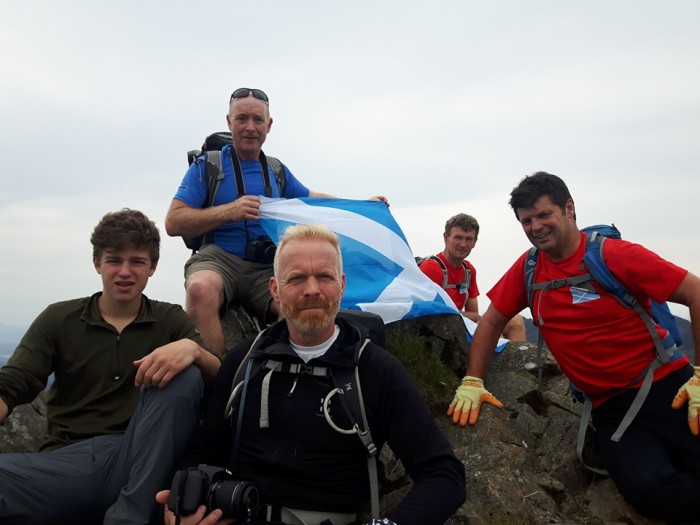 James had made an attempt to test the conditions on the Inn Pinn’s east ridge but wet slippery rock and rising winds forced a retreat and temporary abandonment of a stuck rope. After a bit of debate a wise decision was taken by everyone to leave the Inn Pinn for another day and a swift descent to the hut followed. 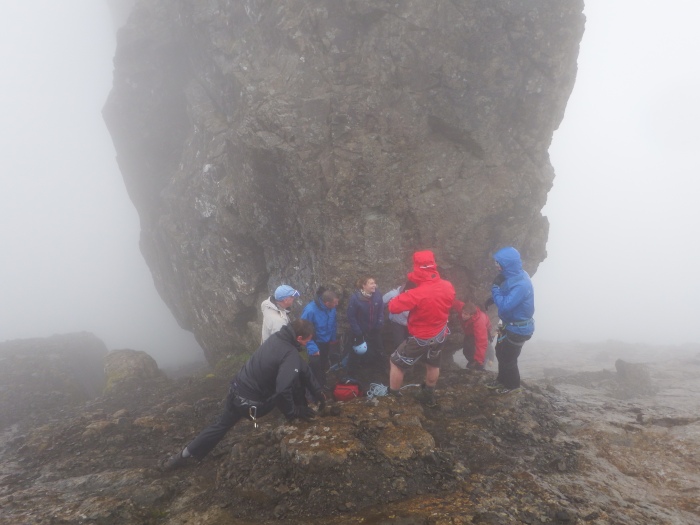 Ian and Ian had arrived at the hut by the time the group returned and soon food and drink were being heartily enjoyed – a lucky few also managed a shower before the water dried up. Later in the evening Deb arrived with Elena and Iain. Unfortunately, as she was unloading the car in the dark, Elena went over on her foot which was to curtail her walking for the weekend. It transpired later that she had actually broken her foot and the accident would put her out of action for six weeks.

Once again, a fine evening of chat, banter and song followed. 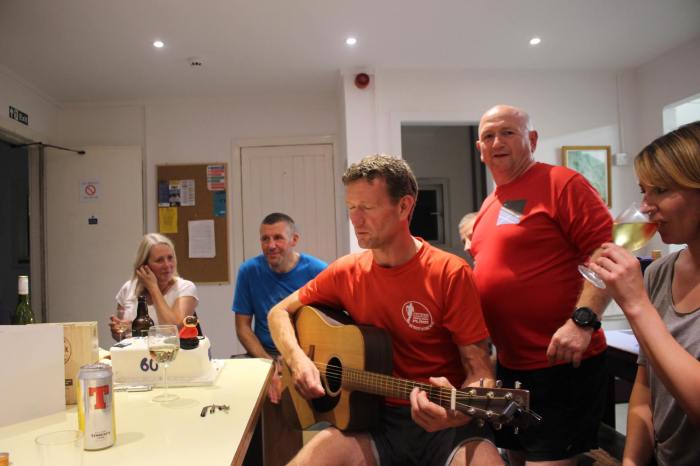 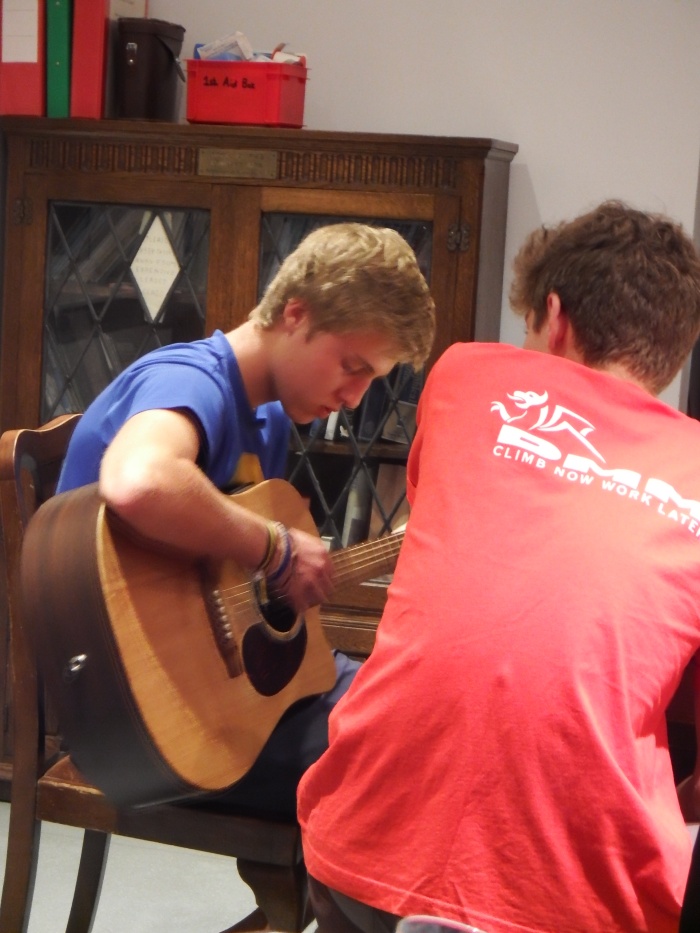 James has recently passed the milestone of his 60th birthday and club members had chipped in a few quid each to present him with a fine bottle of single malt whisky and an appropriately decorated cake. For once the Chairman was stuck for words…at least for a few minutes. 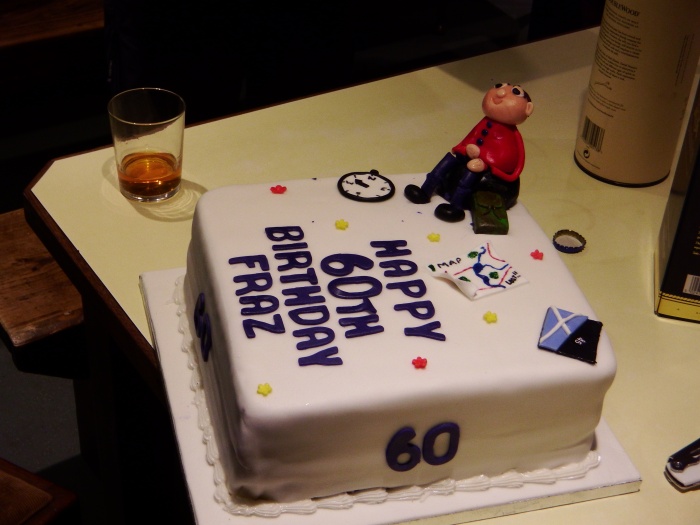 Ian Millar was elated to find an entry in the hut journal from 1980 – when as a youthful 15-year-old he enjoyed his first visit to the Cuillin. 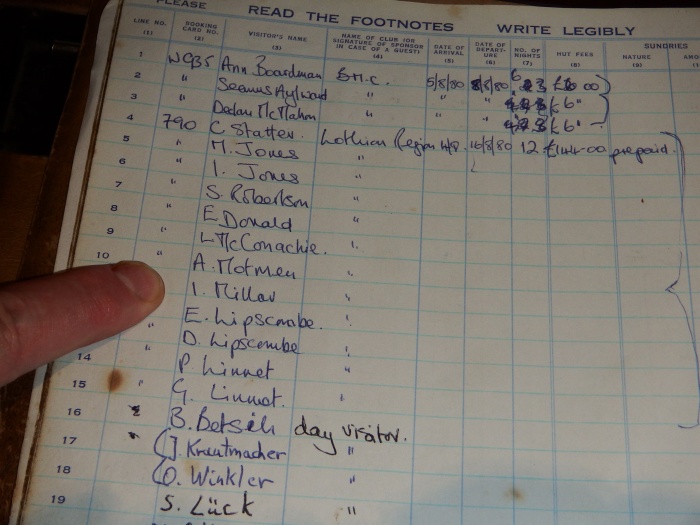 As forecast, the next morning turned out to be beautiful and dry and three epic excursions were planned:

Paul, James, Blair, Logan, Norrie, Susan, George, Ian and Ian had unfinished business at the Inn Pin and were headed back there.

Rowena, Bill and Iain planned to start from the south of the ridge i.e. Sgurr nan Eag and head northwards over Sgurr Dubh Mor, Sgurr Alasdair and Sgurr Mhic Choinnich – with the possibility of ending up at the Inn Pin if time permitted.

The Pinnacle Ridge of Sgurr nan Gillean is a classic high grade scramble involving abseils and a bit of rope work along the way. Raymond, Jim and Lorn decided that this would be their target for the day – with a continuation to Am Basteir and Bruach na Frithe very much part of the plan.

Unfortunately, Alan remained on the injured list along with Elena and, together with Deb, remained back at base.

Ian Pollock had the bit between his teeth and set off briskly having volunteered to carry a rope – with Ian Millar desperately trying to keep up with him. Somewhat perplexingly for those following behind, Ian had decided to forge his own way up to the base of the Inn Pin via Coire Lagan and some scree slopes. Although not the first to arrive at the base of the Inn Pin, he did get there before a few of the group who were still shaking off the effects of the previous evening.

The legend that is Paul McGrandles led the climb up the long east ridge, followed on the rope by Blair, then Logan and Ian Pollock. Ian Millar. Susan and George declined the assistance of the rope and scrambled freestyle up after them where the group congregated on the top for smiles, photos and congratulatory high-fives. It was an absolutely perfect day to climb this famous fin of rock – it being a first ascent for Blair, Logan and Ian Pollock. 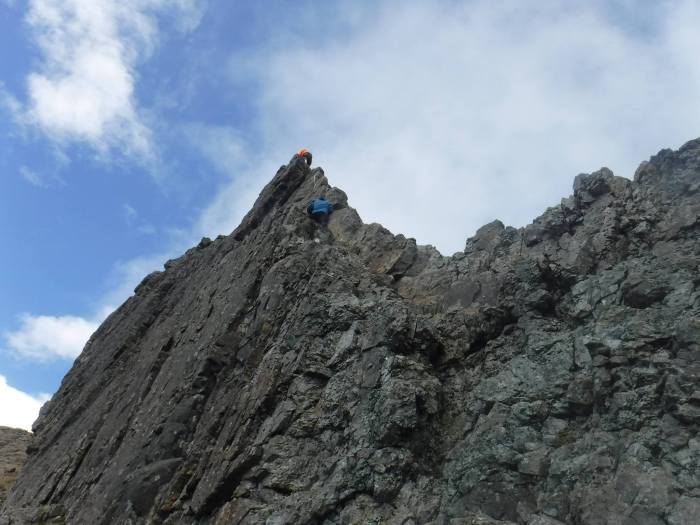 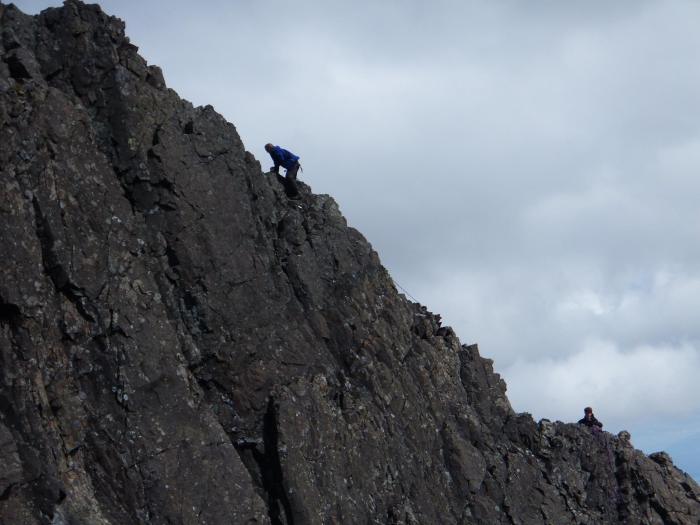 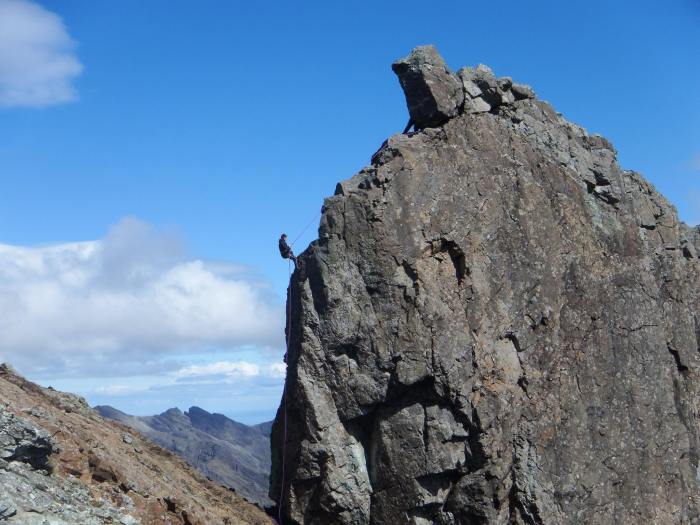 The “Bus Pass Boys” aka James and Norrie were on photography duty nearby and some classic shots were taken of the climb and the abseil off. Spirits amongst the group were high and they were happy with their day’s work and content to return down the ridge back to base.

Susan and a rejuvenated George were the exception and they marched off in a south westerly direction to add the summits of Sgurr Mhic Choinnich and Sgurr Alasdair to their weekend tally. They made great progress and could be seen by the others striding purposely up Mhic Choinnich’s ridge. A saunter along Collie’s Ledge and a scree diversion around Sgurr Thearlaich saw them attain Alasdair’s summit. Content with their day, they made their way back to hut. 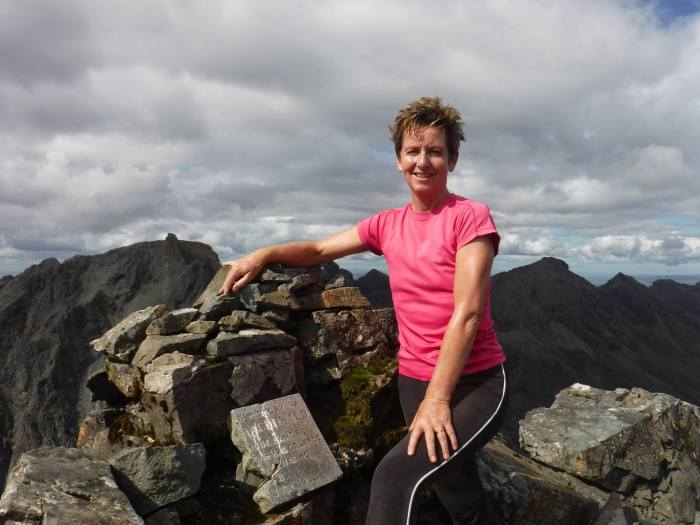 Ian and Ian were first back at the hut and they managed to make Alan feel part of the team by accompanying him on a first ascent of the road to the Carbost pub. 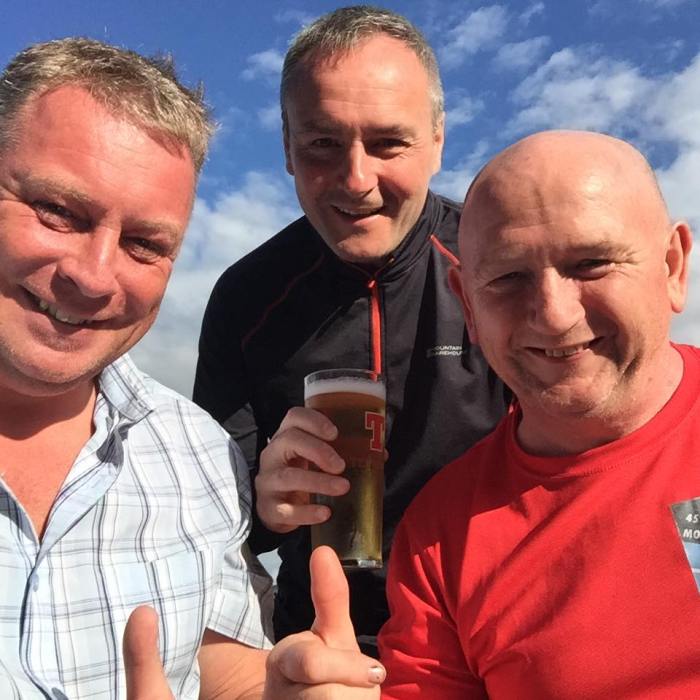 Meantime, Raymond, Jim and Lorn had set off on their mission. Such was their excitement at the prospect that they set off initially on completely the wrong path thereby earning Team Evenden the wooden compass. Soon they were on course though and the serious business of traversing the great Pinnacle Ridge began. This “walk” is definitely not for the faint of heart with some awkward and exposed scrambling on the airy ridge and some lengthy abseils required – particularly off Knight’s Peak, a demoted Munro Top. 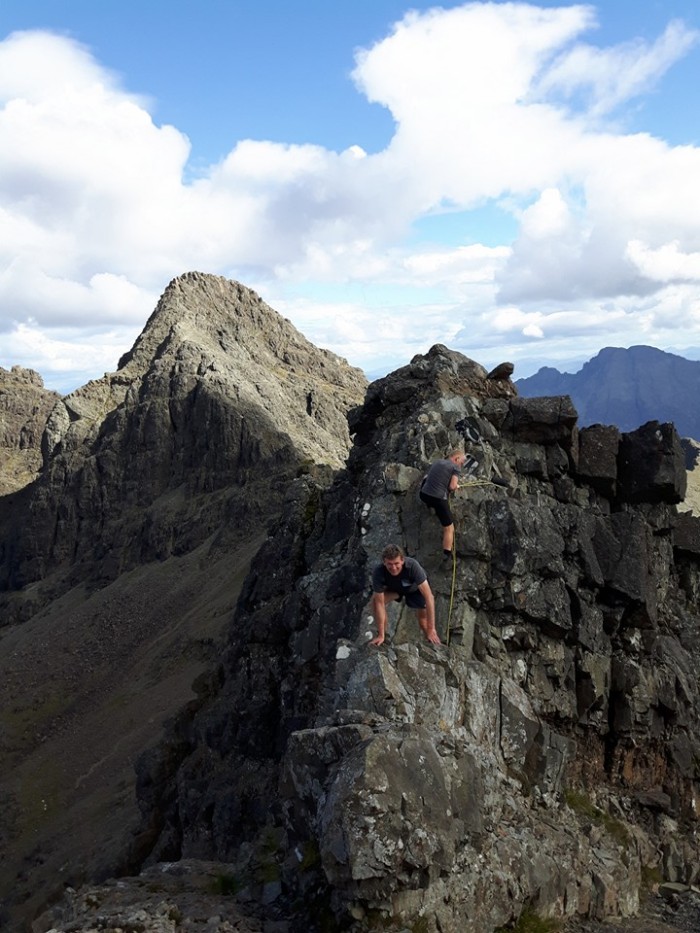 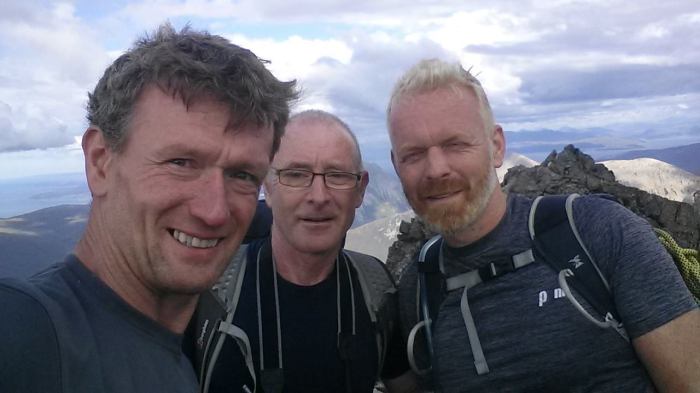 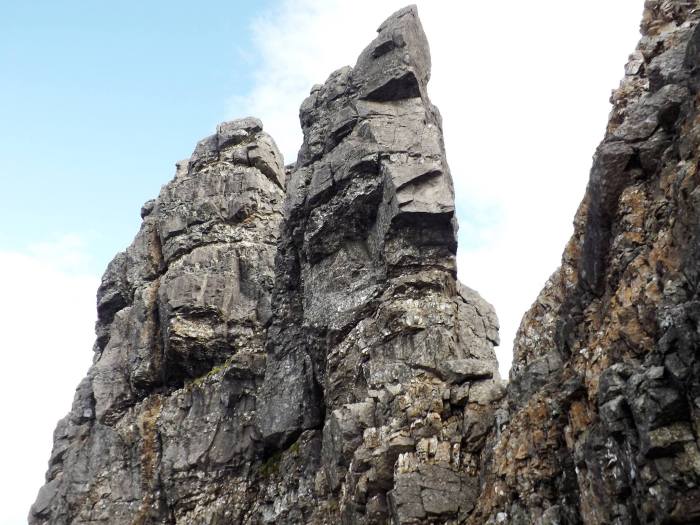 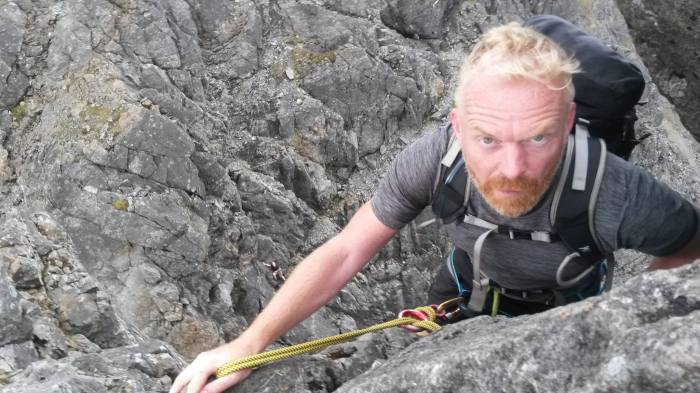 Having made it to the summit of Sgurr nan Gillean though, their day was far from over. Another abseil was required down Nicholson’s chimney enabling them to ascend Am Basteir by its east ridge before retreating and climbing the relatively benign Bruach na Frithe. Elated with the adventures of the day, the group made very short work of the descent to the Sligachan Hotel where a well-deserved cold beer (or two) was enjoyed.

At the opposite end of the Cuillin ridge, Bill, Iain and Rowena had been making their way up into Coire a Ghrunnda and from there up to the southernmost Munro in Skye, Sgurr nan Eag. Rowena was particularly pleased to see that this summit did actually exist after searching for it forlornly in the mist the previous year.

A bit of abseil practice off An Caisteal, and Sgurr Dubh Mor was ascended. Continuing their progress north east, the infamous “TD Gap” was avoided and the summit of Sgurr Alasdair was achieved via a chimney between the Cuillin’s highest peak and its subsidiary top, Sgurr Sgumain.

With the adrenalin still coursing through their veins, they pushed on to the base of Sgurr Mhic Choinnich where the easy, but highly exposed Collie’s Ledge leads around below the peak before the ridge is attained. A short scramble back south led them to their final summit of the day.

Any thoughts of continuing to the Inn Pinn had been dismissed, and content with their achievements they too headed back down to Glen Brittle. 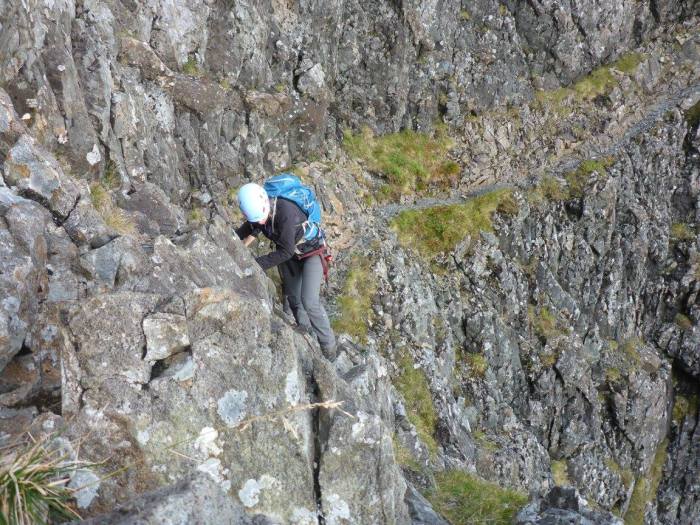 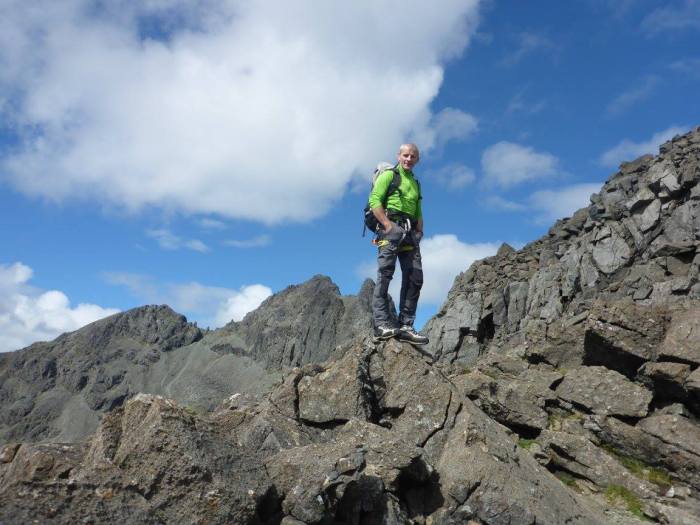 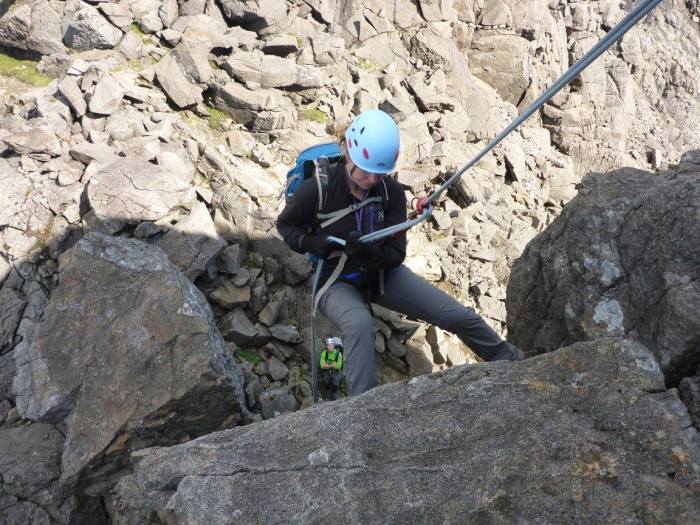 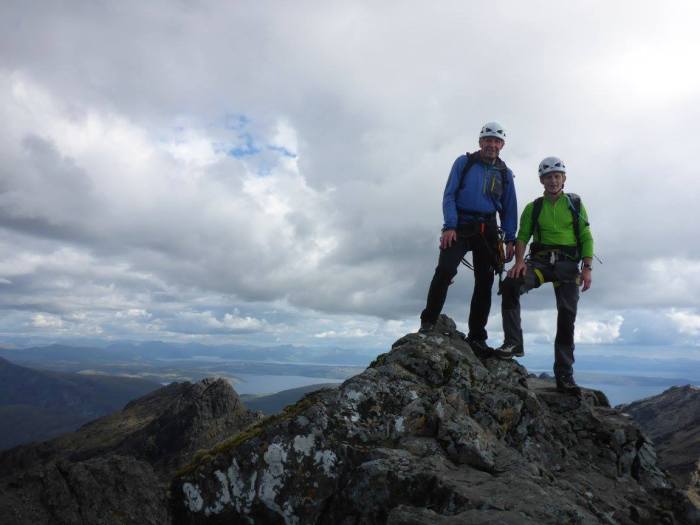 The excitement of the day ensured that nobody drifted off to sleep too early that evening and the McGrandles cup was held over yet again. A great evening was spent sharing photos and experiences of a sensational day in the finest mountain ridge in the country.

Most drifted off to bed in the very early hours but a few hardy souls kept the party going well into the morning.

Sometime before sunrise Bill, Rowena and Iain decided that it would be a perfect time to make their ascent of the Inn Pin. If they left at that time, there was absolute certainty that they would have it to themselves. The three duly packed their gear and headed up the ridge – and they were well rewarded with some amazing early morning sunrise panoramas. Bill led the climb up the Pinnacle followed by Iain and Rowena and an abseil back down the west ridge completed the task and they headed back to the hut chuffed that they had managed to get the Inn Pin done so early. 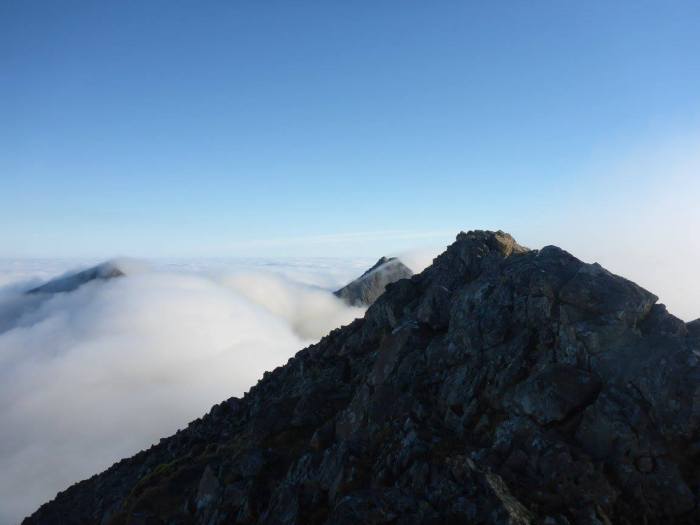 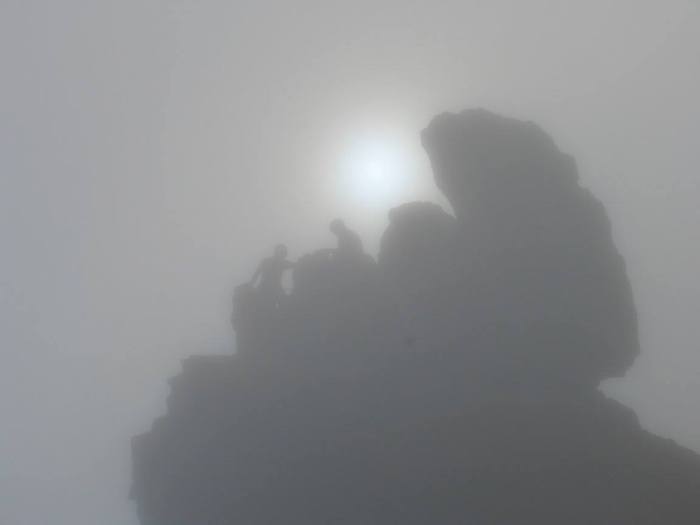 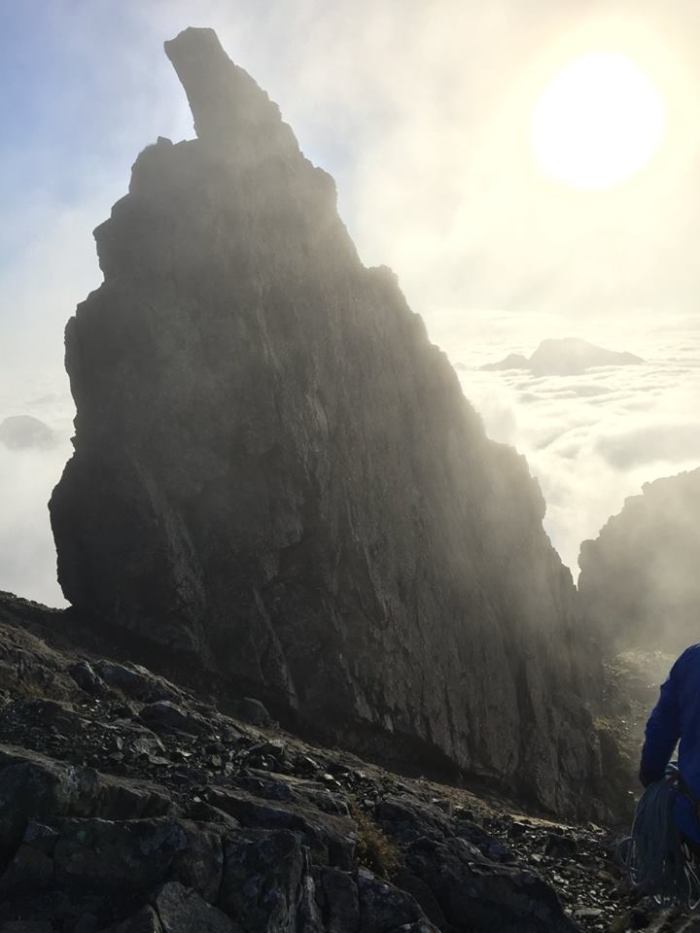 Meanwhile, back in Glen Brittle the others set about tidying up the hut and gradually they drifted off on their way home.

A stupendous weekend had been enjoyed and already this hut has booked for the club’s August meet in 2017.

Subsequent to the original posting of this blog, a club member pointed out that every Skye Munro had been covered by a Club Member at some point over the weekend – a great effort indeed.