Torridon is a shining jewel in the Scottish Hillwalker’s crown and it was to this region that the Club headed for their September Meet on 16th and 17th of the month. The precise destination was the SMC’s Ling Hut (named after William Ling) which sits a few hundred yards south of the Glen Torridon road, directly opposite the majestic mountains of Liathach and Beinn Eighe which both boast twin Munros. Thirteen members attended – with Bill Dallas sleeping in the no-snore zone i.e. his van as the Hut sleeps only 12. 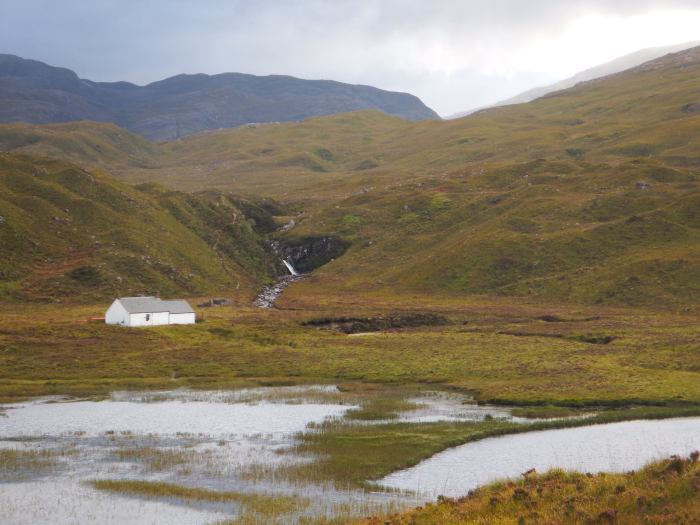 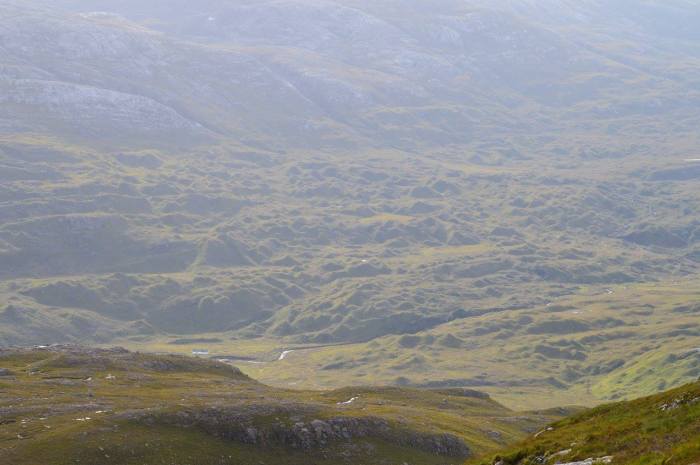 As usual, on the Friday morning George, Susan and Norrie set off early in the morning to get a walk in before the others arrived. After a brief hiccup, which involved a quick about-turn to pick up the hut key which had been left behind, they were heading up the A9, then west towards Achnashellach Station in South Torridon. The plan was to take in the impressive Corbett, Fuar Tholl (just short of Munro height) then head over to Sgorr Ruadh. At this point Norrie would return to the car and drive around to Glen Torridon whilst George and Susan continued to the neighbouring Munro of Beinn Liath Mhor, then over another Corbett, Sgorr nan Lochan Uaine and then descend directly to the Ling Hut. 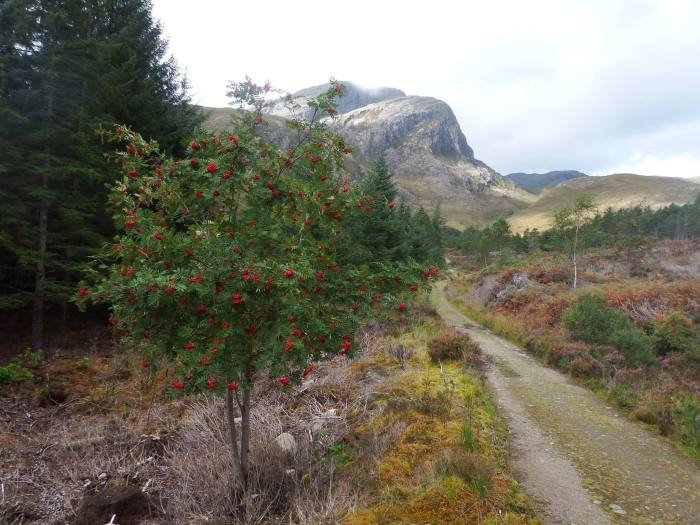 For once, the plan went pretty much as planned. Having headed up the path alongside the River Lair, they then turned west and aimed for the obvious gap between the first two hills – with Susan’s nimble-footed river crossing putting the others to shame.

Just before the start of the climb up Fuar Tholl, Norrie announced that to save time (and his energy), he would head directly up to Sgorr Ruadh whilst the others climbed the Corbett. The weather wasn’t brilliant but the mist cleared intermittently and there were gloriously tantalising glimpses down to Loch Carron and over to the nearby hills. The summit of Sgorr Ruadh must be one of the finest viewpoints on the Scottish mainland with superb views over to the Torridon giants and out to sea. Norrie had the luxury of a relaxing lunch and a few photo opportunities when the clouds parted. 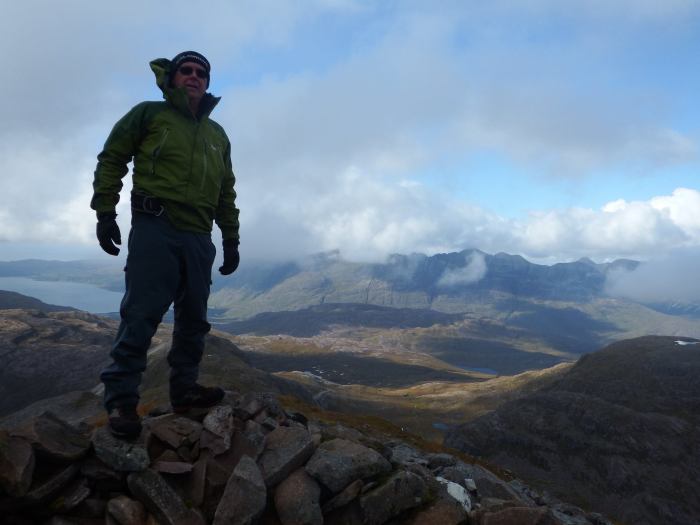 Before too long George and Susan appeared having successfully scrambled up to Fuar Tholl’s summit, followed by the stroll up Sgorr Ruadh’s grassy slopes to meet Norrie. After five minutes, they parted again as planned, with George and Susan heading over to Beinn Liath Mhor and Sgorr nan Lochan Uaine . The clouds relented sufficiently to afford them some great views in all directions. 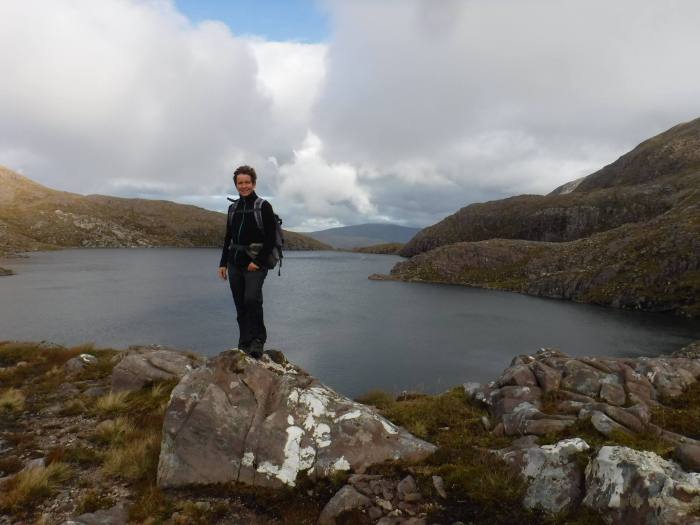 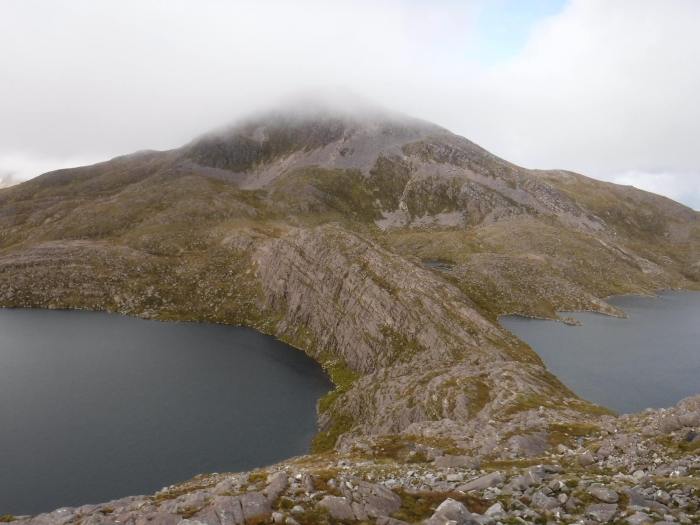 In the meantime, Norrie commenced his arduous descent and returned to car before zooming around to the Hut where he expected the others to be waiting at the car park pointing at their watches.

Raymond, James, Jim, Paul, Alan, Ian and Ian had indeed reached Torridon before Norrie arrived with the hut key – but they showed remarkable intuition by retiring to the bar at the Torridon Inn until they were absolutely sure that the hut was open and warmed up. Turns were taken posing with the mounted stag’s head, but only Raymond had the height to carry it off. 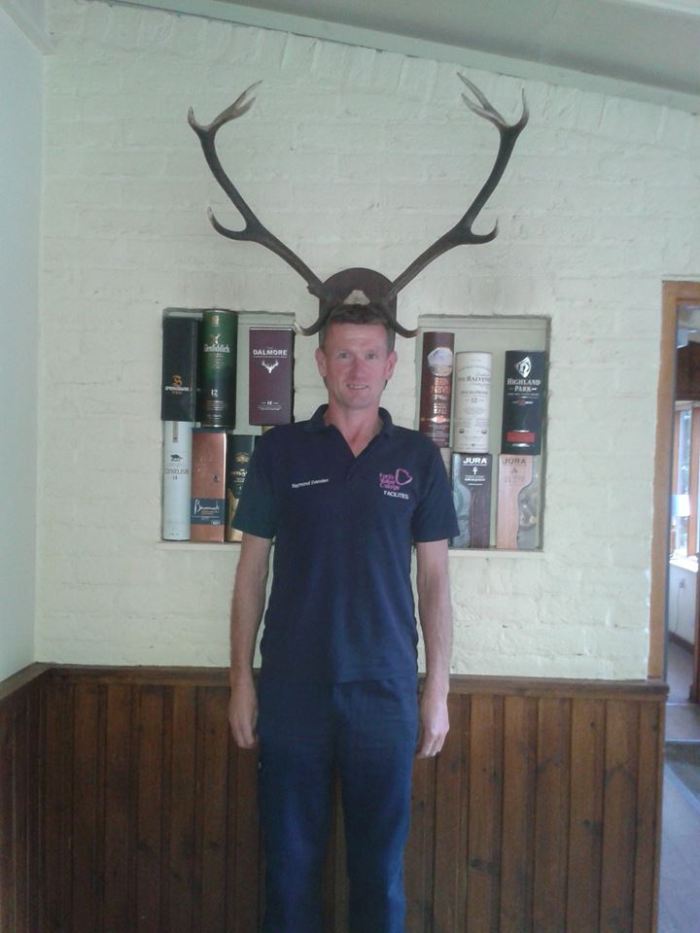 George and Susan descended to the hut just as Norrie was struggling with the shutters etc, but between them they managed to get the hut ready for the others’ arrival. That is apart from the water pump which, later on, even James was unable to fix and – it appears had been out of action for several months.  Did the vandals take the handle?

Bill, Rowena and Ally arrived shortly after and an evening of chat, food, drink and song followed in time accustomed fashion. 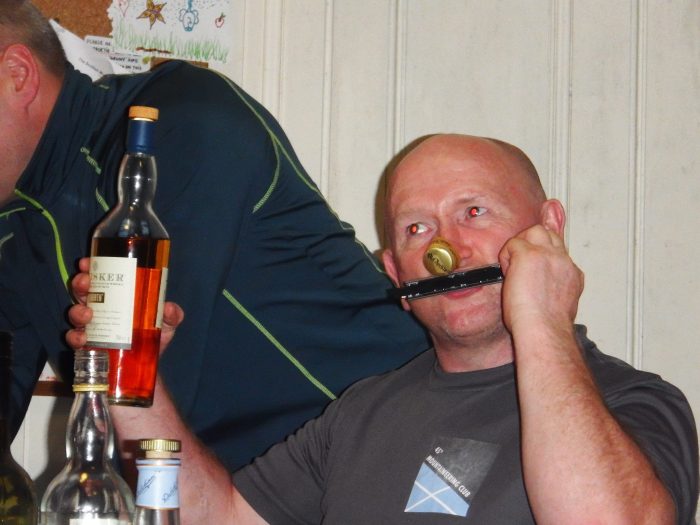 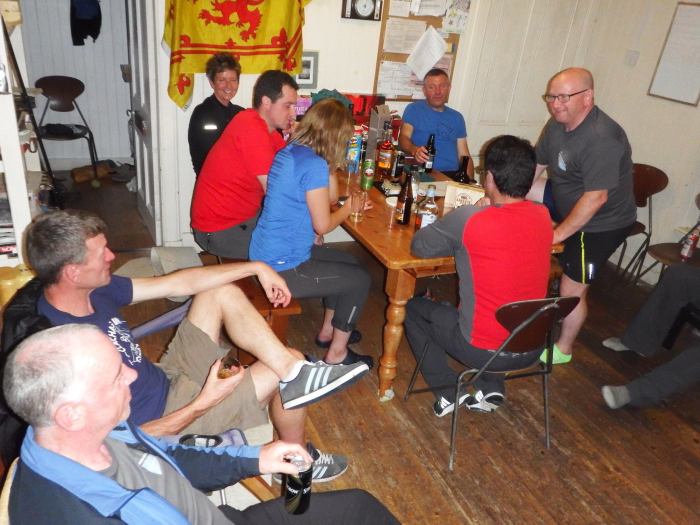 All the group, with the exception of Raymond, had decided to tackle the stupendous Liathach the next day. Unfortunately, Alan’s knee was still playing up and reluctantly accepted that he would not be able to join his mates on their tantalising traverse. Raymond’s plan was to have a crack at the equally magnificent Beinn Alligin before scaling the nearby Corbett of Beinn Dearg – a meagre ba’ hair short of Munro status. Two further Corbetts, Bhaosbheinn and Beinn an Eoin lay further to the north if conditions and energy levels allowed.

The first group consisting of Ian, Ian, James, Paul, Norrie, Susan, George and Jim set off west along the glen to attempt the traverse from west to east. Before setting off, Norrie – certain that there would be no water on the ascent – risked life, limb and other important parts of his anatomy by scaling a high barbed wire fence to fill up his bottle. Of course, as the climb proceeded, there was more than ample fresh water tumbling down the hillside.

The group soon split in two with Ian, Ian, James and Paul taking to ridge, west of the path whilst the others stuck to the trail. The ridge-walkers enjoyed some entertaining scrambling on the ascent with breath-taking views back down to Loch Torridon and beyond. With occasional sightings of other group on the skyline, the trail-blazers followed the excellent path up to the first summit of Mullach an Rathain, the lower of Liathach’s two Munros arriving shortly before their mates. 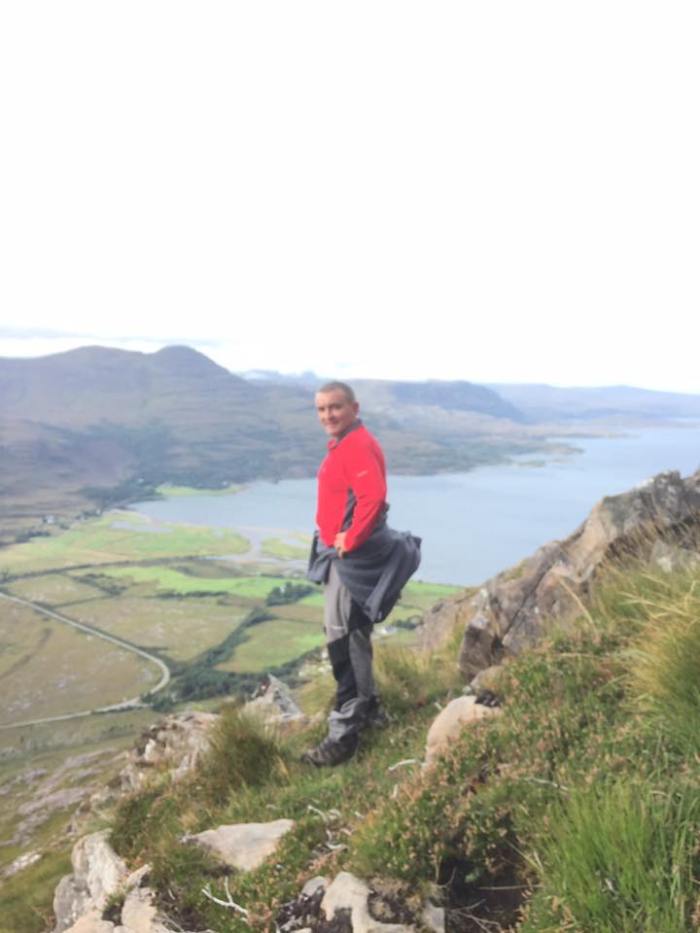 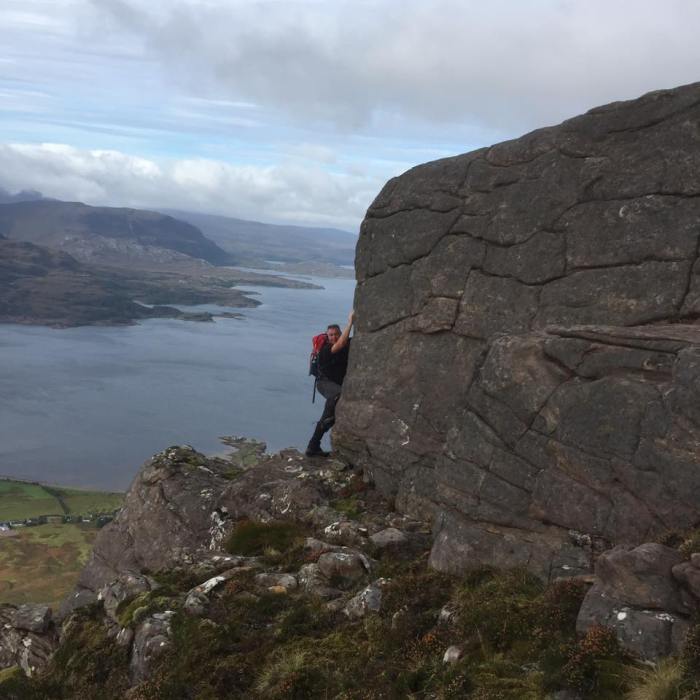 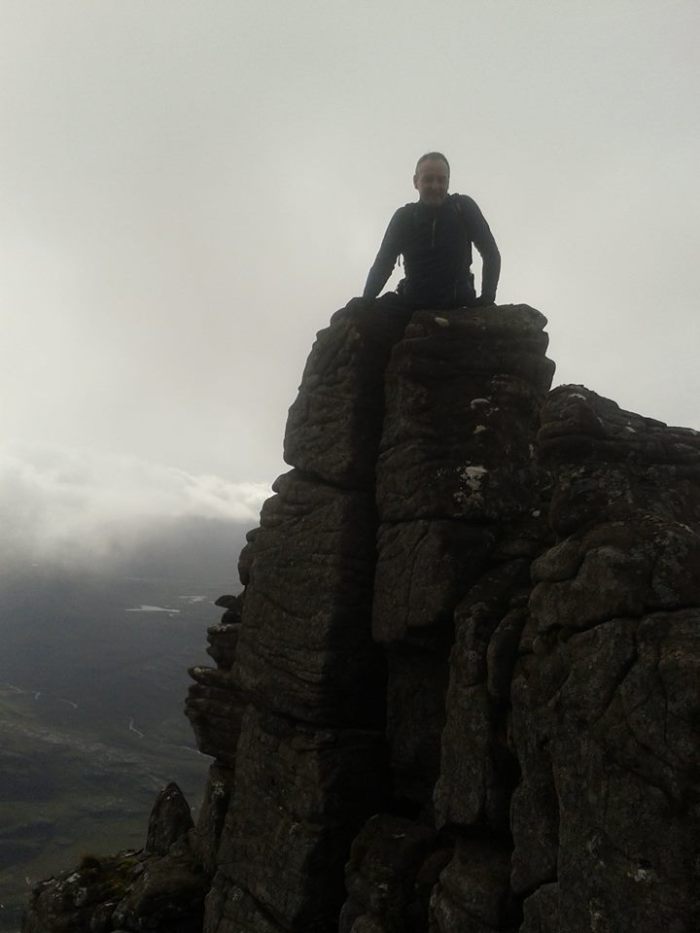 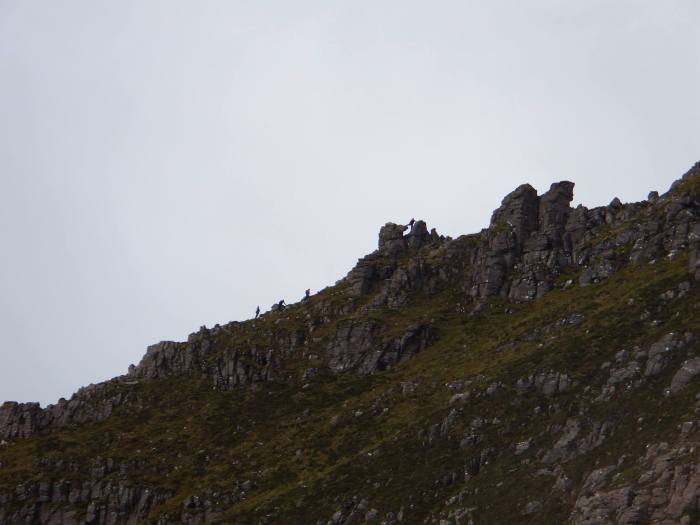 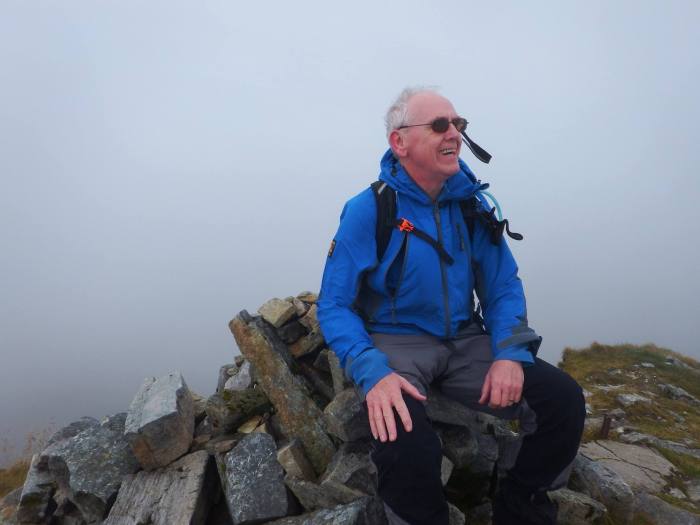 The mist was down at the Munro but as the group headed east towards the Am Fasarinen pinnacles and the other summit, there was intermittent clearing of the cloud with atmospheric glimpses along the ridge and down the glens far below. The pinnacles were scrambled over (or around) offering great entertainment on the traverse east. Eventually the scrambling was over and they arrived at the highest point, Spidean a Choire Leith. A group photo was taken before following the ridge further east and eventually the path south back to Glen Torridon. 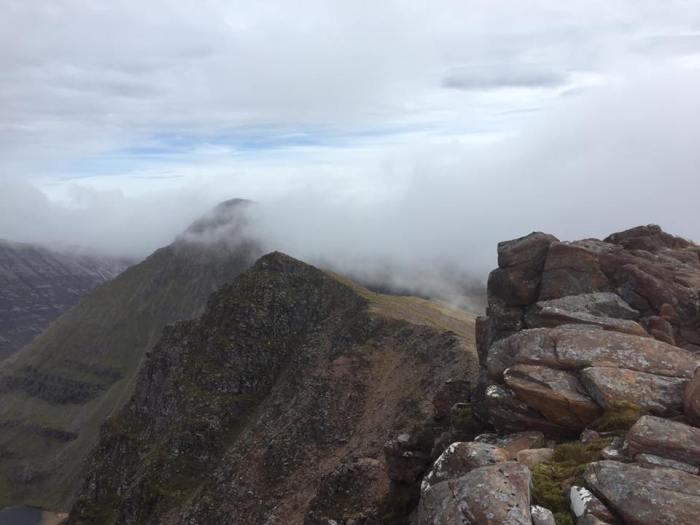 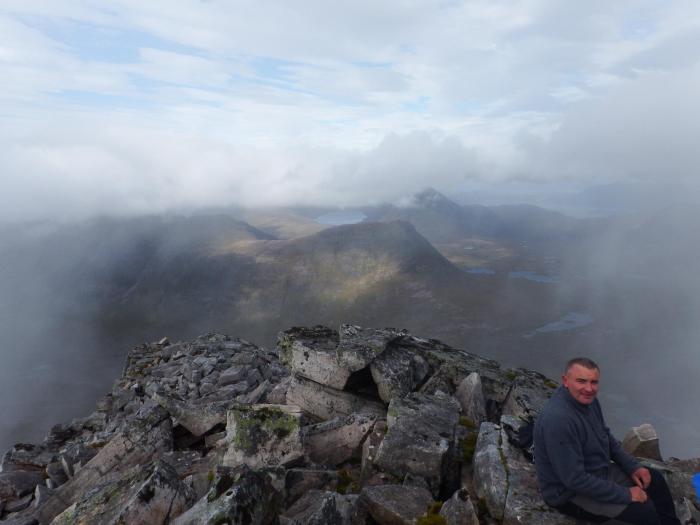 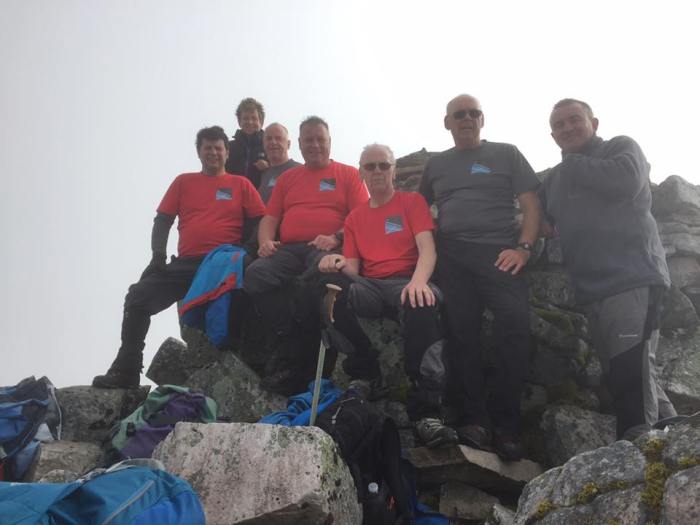 Seconds after leaving the summit though, they encountered Bill, Rowena and Ally who, having had a longer lie-in, were tackling the ridge in the opposite direction, the trio were in no doubt that the main party was just ahead of them as the melodious strains of “Top of World” gently filtered down the slopes to their ears. The three were left to enjoy the scrambling and traverse west whilst the others alternately scampered and/or ambled back down to the valley floor. 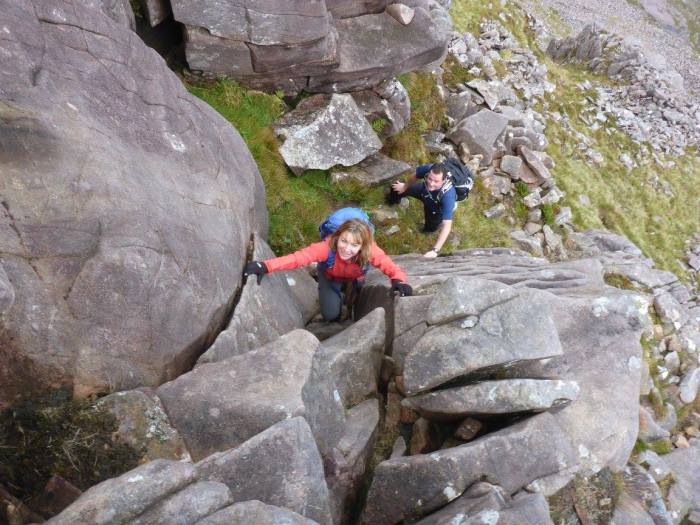 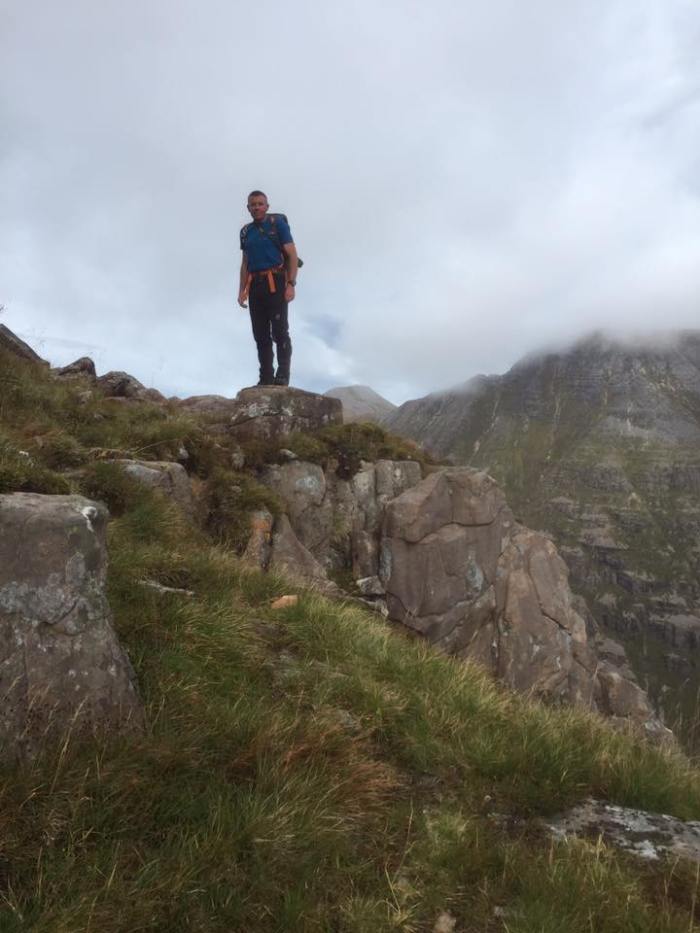 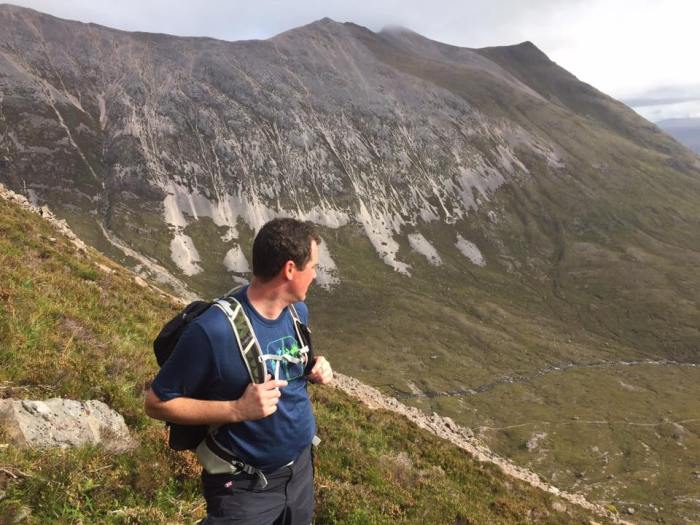 Alan had decided that his knee was sufficiently robust to tackle the five mile walk along the glen to the Torridon Inn where he was patiently waiting for the others arriving to tend to their thirst. As refreshments were being taken, Raymond appeared having successfully hitched a lift along the road.

He had enjoyed a great day on Beinn Alligin, which offered similarly amazing views and the subsequent steep – very steep – climb up the slopes of Beinn Dearg. Were this hill to be a couple of feet higher it would be lauded highly along with its neighbours but, as it is, it receives a lot less acclaim than it deserves. Having negotiated its arduous slopes, Raymond had encountered really strong winds at the summit and wisely decided that the pub should be his next stop, rather than the Corbetts to the north. 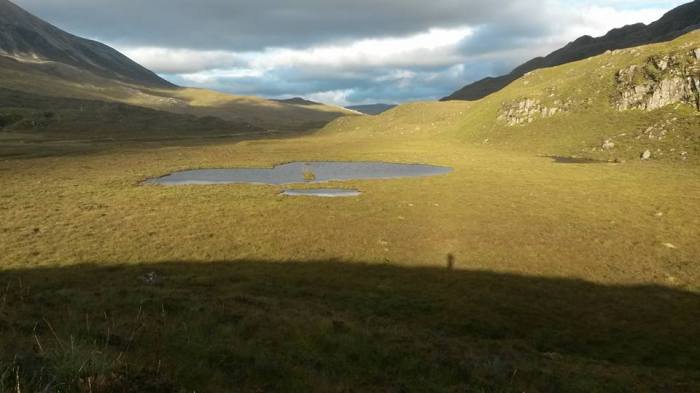 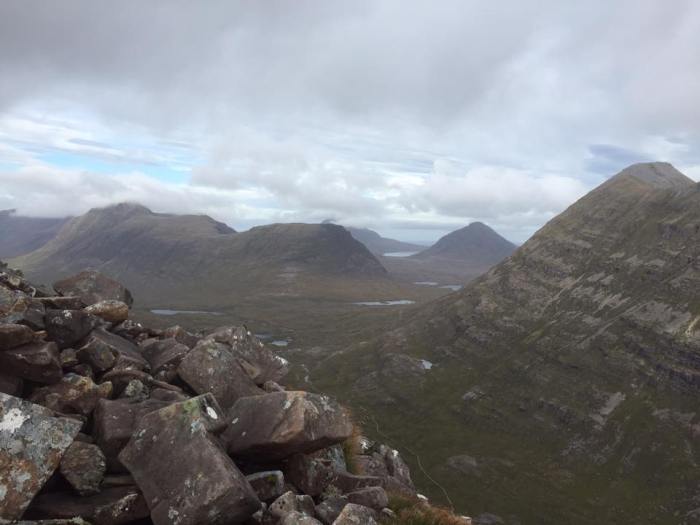 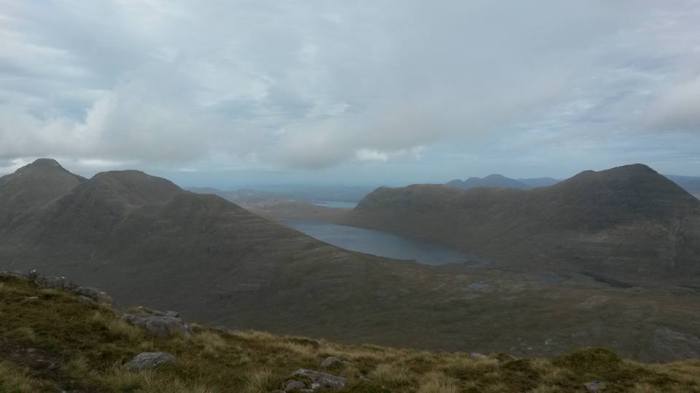 As Norrie, Susan and George headed back to the hut to get supper cooking, Bill, Rowena and Ally had arrived back at their vehicle and they too, decided that a pre-supper pint would go down well and drove around to the Inn. They too had had a very enjoyable scramble along the pinnacle ridge with ample photo opportunities on the way.

Yet another enjoyable evening was had, with additional refreshments to hand and improvised musical instruments available. Jim Hughes and Ian Millar had a neck-and-neck race for the McGrandles Cup, but Ian manged to drift off to sleep first thereby gaining the award for the first time. Once again, the blue flipper and wooden compass remained unclaimed with no daft navigational errors (thankfully) or an unintentional dook in the rivers.

A revived Jim posed with Norrie in a 2016 reincarnation of the classic photo of William Ling and his buddy. 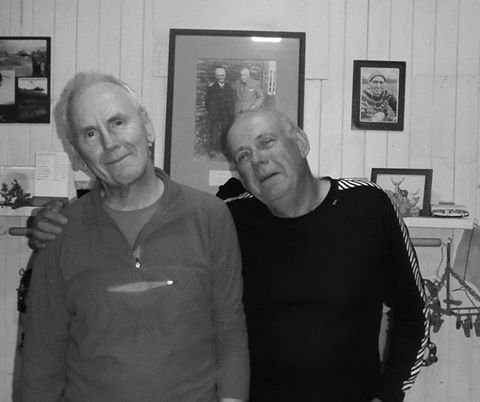 After the communal tidying of the hut the next morning, everyone headed back down the road – with the exception of Bill who was keen to get ever-closer to his Munro completion. With bike in his van, he drove around to Attadale where a cycle into Ben Dronaig Lodge – one of the best bothies in the country – prefaced a scoot up the quite remote Munros of Lurg Mhor and Bidean a’ Choire Sheasgaich, thus ending another vastly enjoyable weekend. 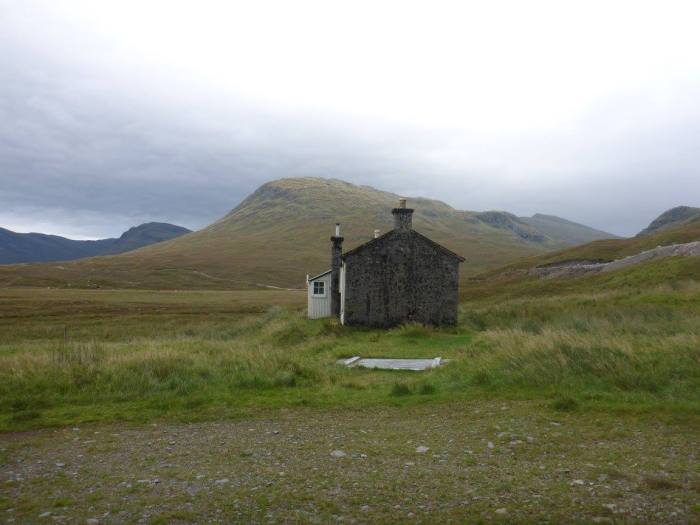