In October 2015, the Club first visited The Jacobites Mountaineering Club Hut at Inver near Achnasheen and were rewarded with some exceptional unseasonal weather. Surely it would be pushing our luck to expect more of the same for our first re-visit on the weekend of 10th/11th February 2017. Well, as it happened it turned out to be another cracking weekend weather wise with pretty near perfect walking conditions for the time of year albeit with a lot less snow that would normally be expected in mid-February.

Norrie was first out the traps on Friday morning. His intention was to cycle into Fannich Lodge and ascend the two Munros above the Lodge – Meall Gorm and An Coileachan. George and Susan also had their sights set on these two peaks and intended following on about hour later – there being little doubt that they would catch up on Norrie before he completed his walk.

Norrie hadn’t ridden his bike for some time and the cycle in was nothing short of tortuous as the seat kept sliding down to far too low a level. A red nose and a flower in his bowler hat was all that was needed to complete his circus clown act. Finally arriving at the Lodge, he was requested by an estate worker to slightly alter his route as they were culling some hinds on the lower path on his intended track. He missed the detour path just past the lodge and ended up bog-hopping northwards until he reached the stalker’s path further up the slope.

By this time the pech-o-meter was almost up to 11 as he dragged himself up the fairly easy angled path up to the summit ridge before a brief detour west took him up to the summit cairn where the spectacular views west and north provided some recompense for his travails. Totally puggled though, he decided not to continue to the second munro and headed back down the hill to the Lodge. 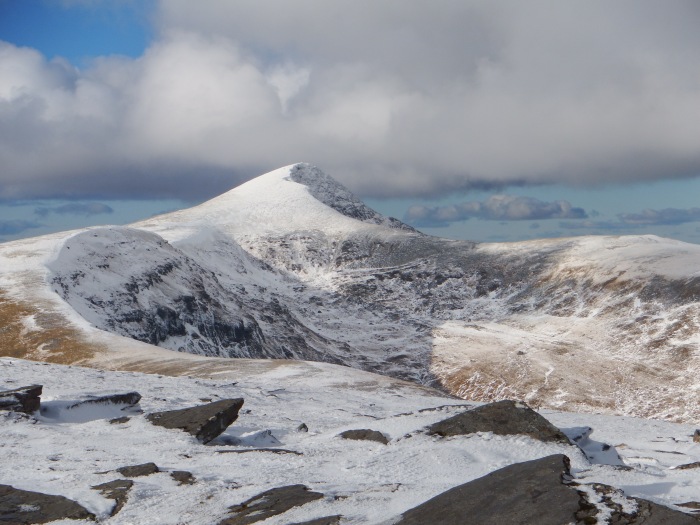 On the way back down he met George and Susan on their upward climb. They had left their bikes a few kilometres east of the Lodge to shorten their line of descent. Being made of sterner (and younger) stuff they made short work of the first munro and then cantered easily over to An Coileachan before scampering back down to the road just in time to see the blur of Norrie’s orange hat zooming back along the road. With his bike seat now fixed and George and Susan following behind all three enjoyed the mostly downhill scoot back to where the cars were parked. 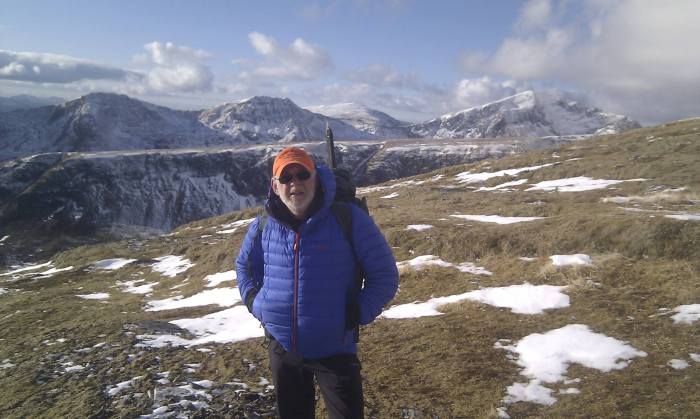 Shortly afterwards they were parked up opposite the hut which sits a few hundred yards south of the A890 with a raised walkway easing the exercise of carting over their stocks of food, drink and fuel for the fire. A rising bright new moon was shining like a spoon in the cloudless skies above the hut instilling a deep sense of satisfaction at being in such a glorious location. 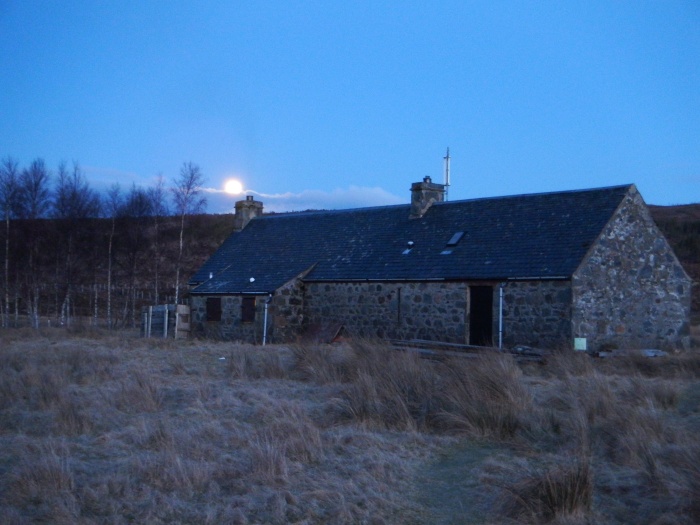 Nobody else had the opportunity to do any climbing that day and as the evening progressed they arrived in their groups and soon the sounds of sizzling, bubbling and scooshing rang round the hut as food and refreshment were taken. As midnight approached , chatter, laughter, singing and a few guitar chords were added to the cacophony. Fortunately everyone had heeded the instruction to bring fuel for the fire as the temperature outside was rather Baltic.

As Saturday dawned, various groups prepared for the day ahead. Alan and Paul had targeted the nearby Munro of Fionn Bheinn. George, Susan and Raymond were bound for two Munros, Sgurr Choinnich and Sgurr a’Chaorachain south of Craig a few miles west. James, Jim, Blair and Daniel were heading further afield – their destination being the iconic twin Munro of Beinn Alligin in Torridon. Neil’s plan was to tackle two Munros in South Torridon – Beinn Liath Mhor and Sgorr Ruadh, with the possibility of extending the walk to the spectacular Corbett of Fuar Tholl if time allowed.

Paul and Alan’s short road journey saw them arrive quickly at the foot of Fionn Bheinn. This hill doesn’t feature on many shortbread tins, it being a bit of a boggy trudge up over the moorland – although there is now a track on the lower slopes up to a hydro scheme which is very useful. The ascent of this hill is well worth it though for the stunning 360 degree views from the summit trig point – especially westward to Torridon. They took their walk at an easy pace as they didn’t want to get down to the pub at Ledgowan too far in front of the others.

Raymond, George and Susan had only a short car journey as well – about 5 or 6 miles west to Craig where the intention was to cycle south east through the forest and alongside the Allt a Chonais to the foot of Sgurr Choinnich and Sgurr a’Chaorachain. Raymond hadn’t taken his bike with him but Norrie was happy to let him borrow his. Unfortunately a couple of kilometres down the track saw a major equipment malfunction as the chain on Norrie’s bike dislodged and jammed causing Raymond to abandon it and get some extra running practice in to keep George and Susan in his sights. At one point a possible alternative mode of transport appeared but Raymond’s legs were too long for the horse and the old nag was left in peace.

A great day was had in excellent conditions, with the extensive views opening up around them as they ascended, first of all Sgurr Choinnich then continued along the rocky ridge to Sgurr a’Chaorachain with Coire Choinnich nestling among the crags to the north. As with all mountains in this part of the country, on a good day the views are spectacular in all directions and plenty opportunities were taken to enjoy them and photograph the evidence.

A scamper back down the ridge followed to where George and Susan had left their bikes. Raymond’s luck was in and he manged to catch a lift from an estate worker, stopping en route to chuck the abandoned bike in the land rover. A short time after that, they too were enjoying a refreshment in the Ledgowan.

Norrie wasn’t up to serious hillwalking on the Saturday after his experiences the previous day but, not wanting to waste the day, set off for one the most spectacular car journeys in the country – from Lochcarron, up over the Bealach na Ba to Applecross. This wonderful sinuous route through an astounding landscape is a joyous experience – on a good day with a reliable vehicle.

At the top of the pass he got out for a walk, initially up to the telecoms mast then south along the ridge of the Corbett – also called Sgurr a’Chaorachain. He passed on the final scramble up to the Corbett’s summit but the dramatic outlook, particularly over to the jagged peaks to Skye was ample reward for getting his backside out of the car. Further reward followed in the form a lunch of freshly caught monkfish in the Applecross hotel. 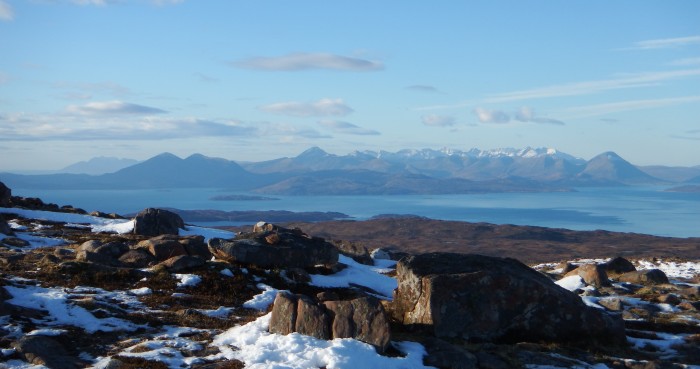 The drive round the coast to Shieldaig and up through Glen Torridon presented many more excellent photo opportunities. Stopping in Torridon to take some photos he thought he heard the sound of James barking out instructions on Beinn Alligin, but it may just have been a jet plane in the distance. His next stop was the Ledgowan where the others (minus the Fraser party and Neil) were already in situ.

Neil, minus camera unfortunately, enjoyed an epic day on his two hills – the Corbett being kept back for another day thus avoiding a head-torch descent. These peaks are also contenders for the best viewpoints in the country – with the outlook over to Liathach and the other Torridon mountains taking the breath away.

James, Jim, Blair and Daniel had set off early that morning, heading west to Torridon to ascend the magnificent twin Munro massif of Beinn Alligin. A fine newly-improved path leads north up Coire nan Laogh up to the trig point which marks the summit of the day’s first Munro, Tom na Gruagaich. No land speed records were in danger of being broken during the up climb, with some of the rocks slippery and requiring full attention. Every rest on the way up was rewarded with stunning views back over Loch Torridon and eastwards to the other Torridon giants of Liathach and Beinn Eighe.

The highlight of the traverse to the second (and slightly higher) Munro of Sgurr Mor was undoubtedly the opportunity to peer down the malevolent abyss that is the Eag Dubh (Black Cleft) – an obligatory photo stop.

On the descent, they flirted with the Horns of Alligin, the three prominent sandstone towers on the route south east into Coire Mhic Nobuil – alternatively scrambling over and bypassing the pillars. The path was followed back to the car park and eventually the group reappeared at the hut to greet the others who by this time had returned from the pub.

A typically enjoyable evening followed with a well-stoked fire adding to the ambience, along with the wine, beer, whisky and song.

On Sunday morning, the group actively put the furniture back in its original place and carried out all the rubbish and “deid men” for recycling whilst James gave a fair impression of Snow White in “whistle while you work” mode as he hummed his merry tune, dishcloth in hand.

Whilst Paul enjoyed his Sunday morning coming down, Jim, Raymond, James, Blair and Daniel decided to take in the nearby Munro of Fionn Bheinn before heading home. Unfortunately, when Jim and Raymond reached the summit, the weather wasn’t quite as favourable as on the previous days and the stupendous views remained obscured. However, James, Blair and Daniel, arriving a bit later in the day did manage to enjoy some views.The extra tick rounded the weekend off nicely. 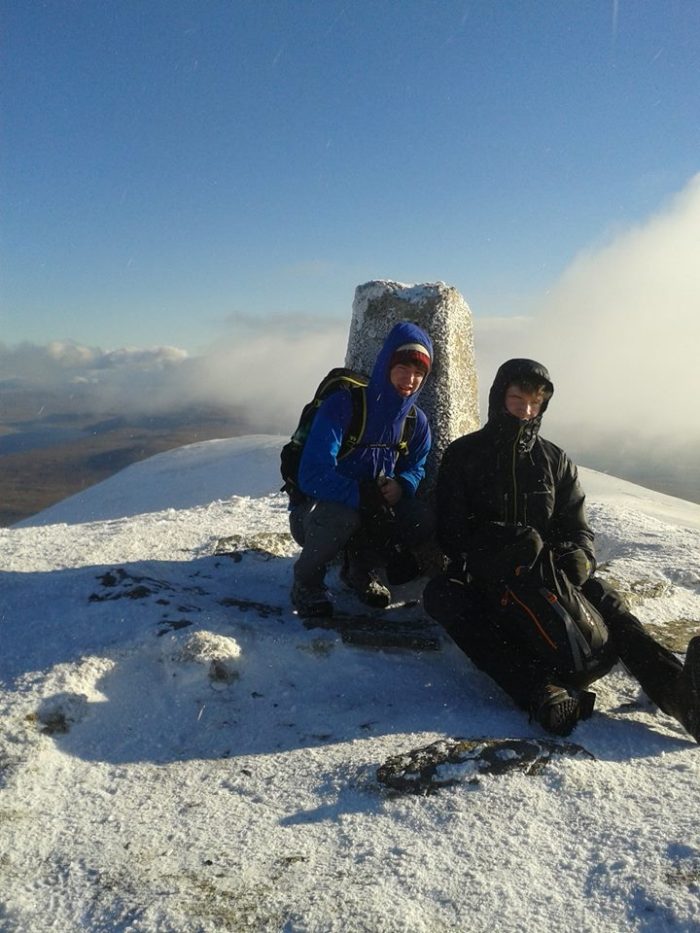 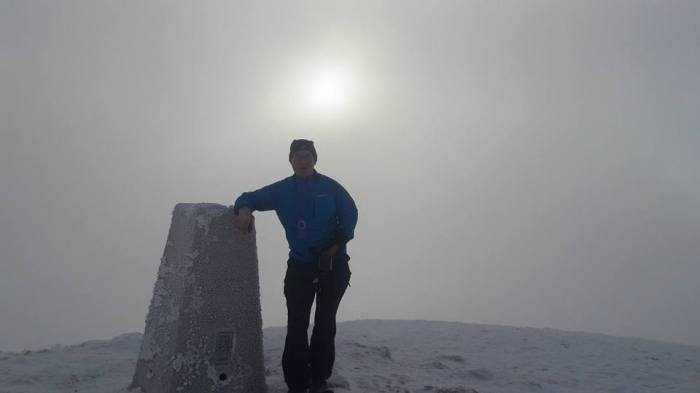