One of the most eagerly awaited meets of the year is the Club’s Burns Supper held annually at the end of January. The venue for 2017 was the magnificent Glassie Farm bunkhouse perched majestically on the hillside overlooking the river Tay and the town of Aberfeldy.  The Original Unit sleeps up to 25 so it was comfortably able to accommodate the group – and it had plenty floor space to set the tables up for the feast. The bunkhouse is superbly kitted out with ample showers/toilets, cooking facilities and even a TV set. 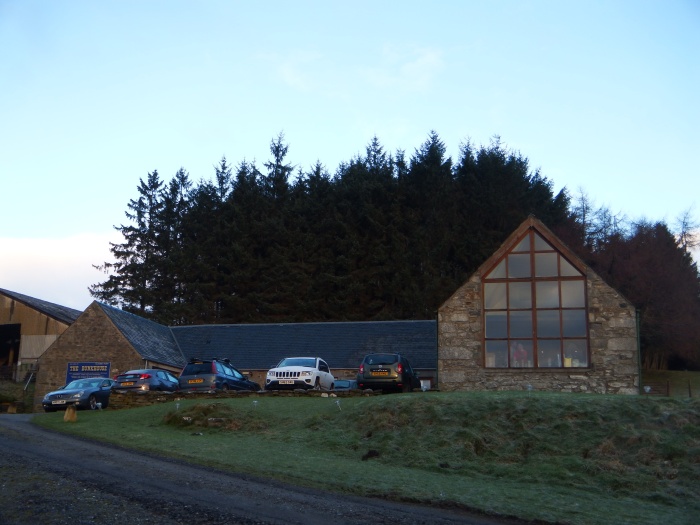 For those fortunate enough not to be working on the Friday (and living in Perthshire) the opportunity was taken to do some climbing in some decent weather with the forecast predicting deteriorating conditions on the Saturday.

George and Susan had their eyes on a prile of summits accessed from Auchessan in Glen Dochart – the Munros of Sgiath Chuil and Meall Glas together with the neighbouring Corbett, Beinn nan Imirean. These hills don’t get the adrenalin coursing quite as much as most others but are enjoyable enough on a good day and they afford great views in all directions. Tackling them in an anti-clockwise direction they had a pleasant round on the mainly grassy terrain, enjoying the outlook. The shortage of snow for a January expedition was quite remarkable.

In the meantime Norrie had made the short journey from Pitlochry to the Ben Lawers car park above Loch Tay with the intention of climbing the two North Westerly Munros on this ridge – Meall Corranaich and Meall a Choire Leith. He had chosen to avoid the boggy ascent from further up the road and use the Lawers track and the excellent traverse path up to the bealach between Meall Corranaich and Beinn Ghlas. From there it was an easy pull up to the summit with superb views particularly over to the twin peaks of Ben More and Stob Binnein. Managing to avoid the potential schoolboy pitfall of continuing along the wrong ridge, he scampered (proof required!) along to his second Munro – the lowest and least distinctive summit on the ridge, Meall a Choire Leith. After a refreshing cuppa, a direct descent was taken to the road north of Lochan na Lairige and a plod back to the car park.

Norrie was first to arrive at Glassie and settled in before first, Charlie arrived followed shortly after by George and Susan. During the early evening, all the others arrived in twos and threes and soon the place was buzzing with excited conversation. Pots, pans, bottle-openers and corkscrews were all being put to good use with everyone ensuring that sufficient calories were taken in to see them through whatever lay in front of them the next morning.

Later in the evening, the guitars were released from their cases and quite a few members of the group bashed out a song or two into the early hours. The newly-strung club banjo was passed around with Alan and Gerry trying to elicit something melodic – with Gerry’s fingerstyle proving slightly more successful than Alan’s heavy metal thrashing. 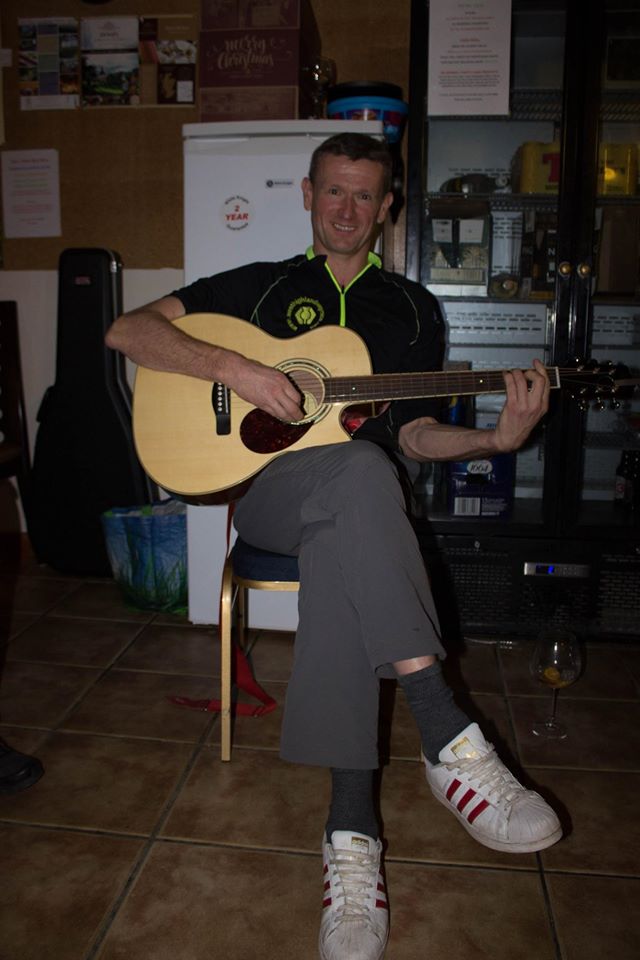 Unfortunately, the weather had indeed closed in during the evening with the arrival of a decent dump of snow and when Saturday morning arrived the conditions were decidedly unappealing for some of the group.

Some of the hardier members were not to be deterred though and various groups set off for nearby (or not so nearby) hills.

Jim Aire, James and Gerry had taken their bikes up with them and planned to cycle up Glen Tilt and ascend the Munro, Carn a Chlamain – an easy enough climb in normal conditions but a bit tougher in the teeth of winter. Depositing their bikes just north of Forest Lodge 10k up the glen, they put their gear to the test as they scaled the initially steep hillside before the high-level traverse across barren ground to the hill’s summit. After the obligatory summit photos, it was a rapid scoot back down to the bikes and an enjoyable cycle back down the glen. 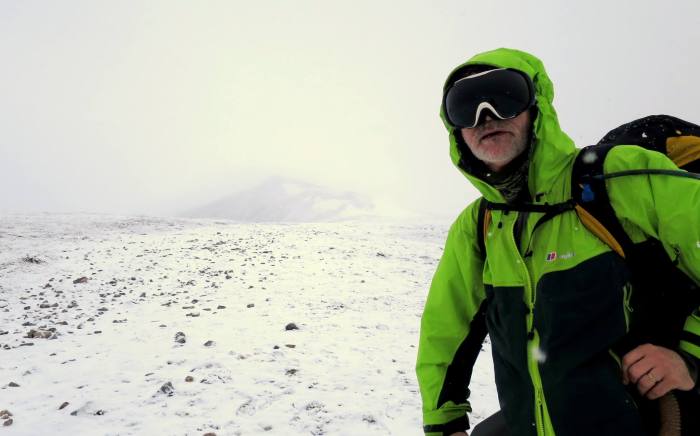 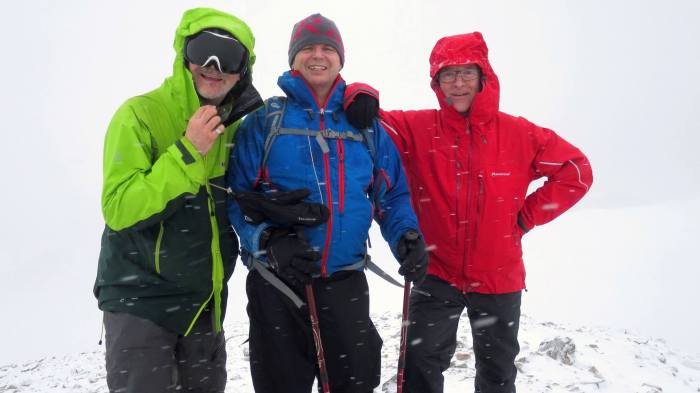 Jim Hughes and Aln were keen to tackle one of Perthshire’s gems, the magnificent Schiehallion, only a short distance from the bunkhouse. A fairly new path from Braes of Foss greatly assists the climb up onto the main ridge. Once there though there is a seemingly interminable trek up and along the hill’s boulder strewn whale back to the summit which, on a good day, affords an excellent outlook over Rannoch Moor to Glen Coe. On this day though they were simply elated to have reached the top. 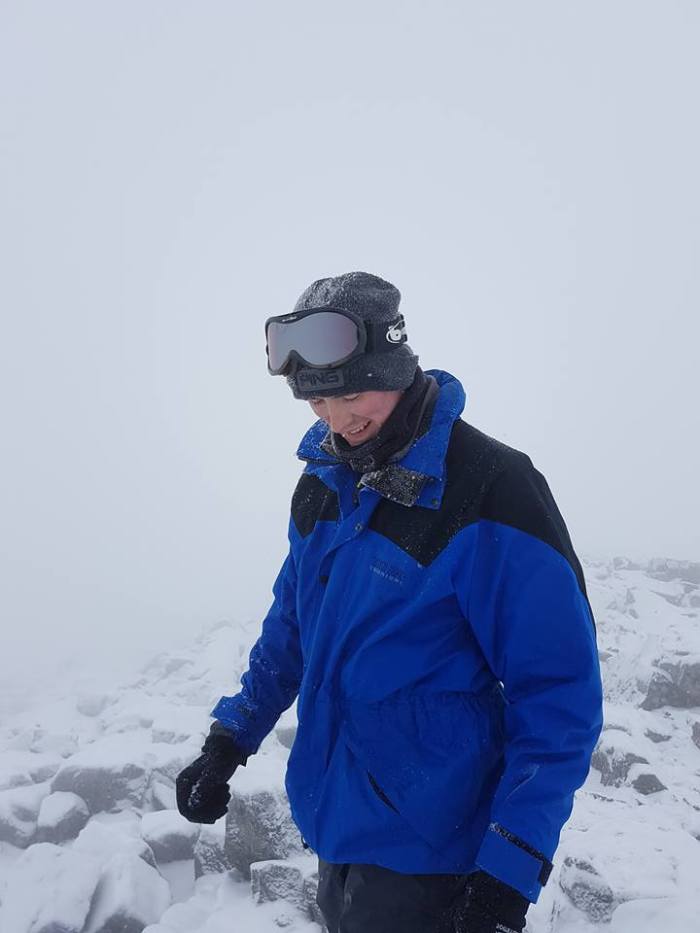 Whilst on the hill Jim and Aln spotted a blue flash blazing along the ridge. At first, they thought it was a previously undiscovered meteorological phenomenon but it turned out to be Raymond who had also decided to have a crack at the Fairy Hill.

Back in the bunkhouse, Norrie, Charlie, Ian, Paul, Cowboy and Alan also resolved to tackle Schiehallion. In their case though the inclement conditions – and their basket of ailments – determined that their “summit” would be the Schiehallion Bar in Aberfeldy where they enjoyed a beer or two, a snack, a few stories and a football match on TV (not that enjoyable actually). During the course of the afternoon, Raymond and then George made an appearance to gain an extra “tick”.

Susan and George, having had a decent day on the Friday restricted their Saturday jaunt to the Corbett of Beinn Dearg in Glen Lyon – a 10k romp up and down a fairly rounded and undistinguished hill. Nevertheless, they were happy enough to get one step closer to completion of their 2nd Corbett round. Unfortunately, Susan had to head back home afterwards on family duties – leaving George in the hands of several enthusiastic but poorly-qualified carers.

Neil and Lorn had their sights set on a pair of nearby Corbetts which they planned to ascend and drop back down directly to the bunkhouse. Having been dropped off on the B846 near Tomphubil they climbed east up over the minor top of Meall Odhar Mor before rising up to their 1st Corbett of the day, Meall Tairneachan. From there they descended a short distance towards an open cast mine where barytes is extracted. Side-stepping the detritus they had a nose around the mine before plodding on over boggy terrain to the 2nd Corbett summit – that of Farragon Hill. From there they were able to descend south back towards the bunkhouse negotiating the forest en route. 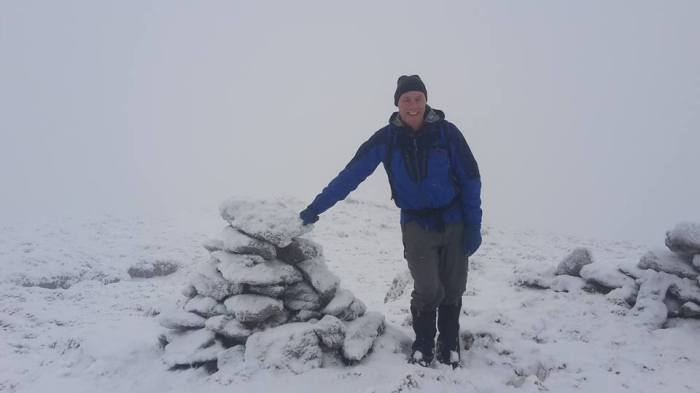 Finally, also with their bagging breeks on, Ally and Rowena set off on a slightly longer drive to Strath Fillan, south of Tyndrum. Keen to make further progress in their journey towards Munro completion, they were looking to ascend the Munro of Ben Challum from Kirkton Farm. The going was none too easy in the soft snow and boggy terrain. However they made steady enough progress and a couple of hours later they stood elated, if slightly frozen at the summit cairn before retracing their steps back to the start. 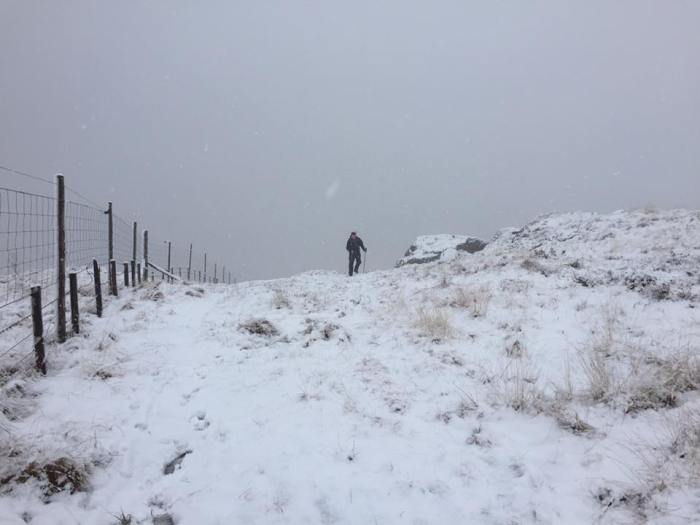 At around 5.45 pm in the bunkhouse, the members gathered round to conduct their annual AGM. Unfortunately, Ally and Rowena were still en route from their walk – but with a quorum present the decision was taken to proceed so that members could relax and prepare for the main event. Sadly, the previous year’s time for the AGM of 20 minutes could not be matched but business was concluded at around 6.30 pm. The party was about to begin!

An array of volunteers had peeled the tatties, hacked the neeps and soon the kitchen area was  a maelstrom of simmering soup, boiling root veg and the cooking of the “chieftain” – plus a couple of his grandchildren.

With everyone eventually seated, George kicked proceedings off with an irreverent twist on the Selkirk Grace inspired – as anyone would be – by a dish of potted hough. Jim Aire and his wife had made several gallons of extremely satisfying soup which was heartily consumed by all.

With pipe music echoing through the room, Ally proceeded to march round the room with the giant haggis sitting proudly on its groaning trencher. Depositing the fare at the far end of the room, Norrie did the customary address reciting (mostly) Burns’ famous ode before the group all raised their whisky glasses and toasted its honest sonsie face.

In no time at all their kytes were indeed bent like drums – with 2nd helpings available to everyone whose calorie replacement was most in need. 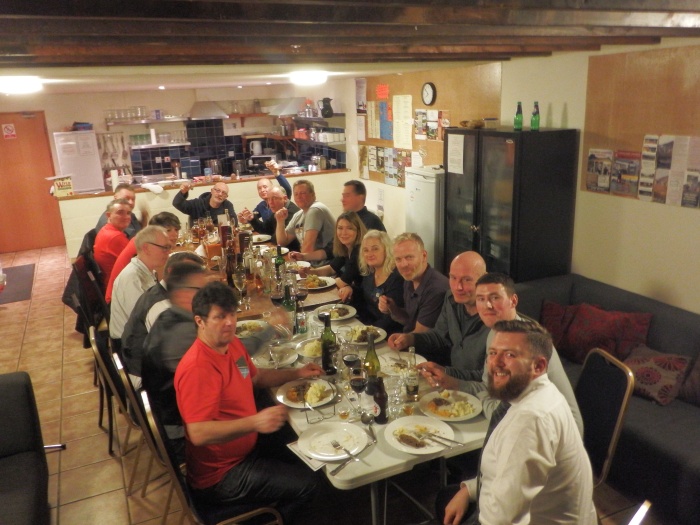 Lorn and Elizabeth had prepared some gorgeous whisky flavoured desserts including cheesecake and bread and butter pudding. These were greatly appreciated by the group who all somehow managed to find room for one (or both).

Cowboy had brought with him an amp and a microphone and after the meal he treated the diners to an electro-acoustic rendition of a few of Burns’ most famous songs followed up by Norrie who added a few more. 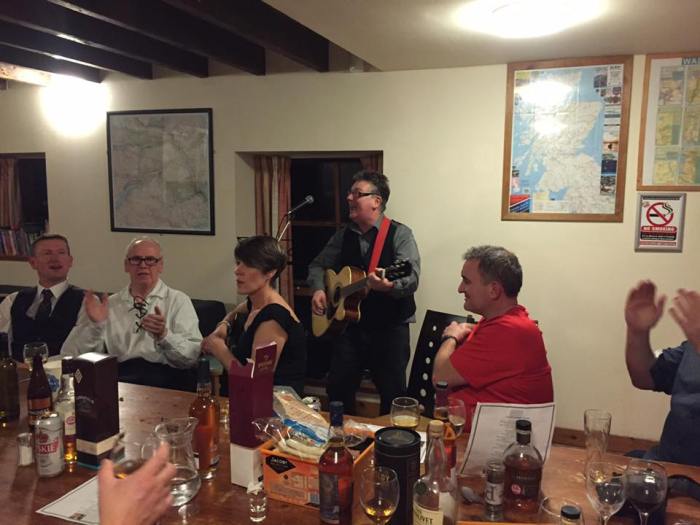 An immaculately attired (as ever) Jim Hughes then proceeded to give an a very entertaining (if slightly baffling) toast to the lassies as is custom.

A response was required of course. Rowena had replied the previous year, Susan was back home on family duty and it would have been unfair to request a reply from one of the lady guests. Dr Raymond Evenden-Frankenstein had the answer though as he introduced his creation, the guest speaker, Ms Alana Oregano. With flowing golden locks, lips like a rose and her Cinderella shoes the divine Ms O delivered a heartfelt response in her best husky Lauren Bacall voice.

Her speech must have been very moving as there were tears rolling down the faces of most of the gentlemen present – and the ladies for that matter as the club’s very own Tootsie gave her passionate recitation.

With Alana’s presence lighting up the room the throng kick-started into full blown party mode. There was a continuous sound of clinking from the kitchen area as yet another “dead man” was added to the bottle bank.

With Cowboy ably compering proceedings, a large proportion of the crowd took their turn at the microphone to warble/croon/roar out their favourite songs.

A truly memorable evening ensued with, eventually, the less resilient present trooping off to bed leaving only the hardened party animals to continue into the wee hours. 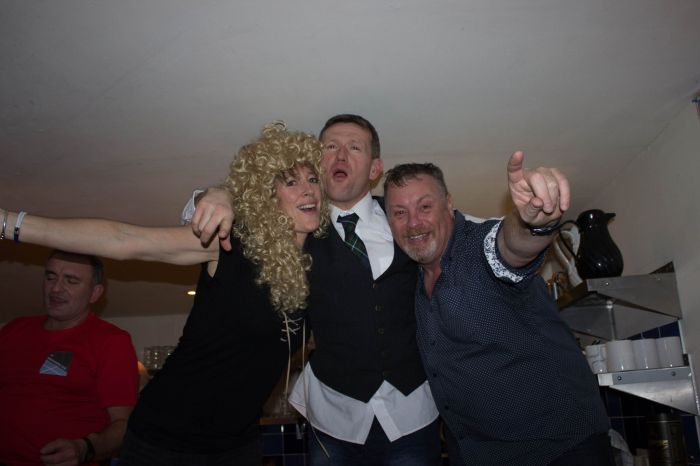 On Sunday morning, the mood had changed from riotous to a very relaxed shade of mellow. There was  a continuous flow of spent revellers tripping through to main sitting room where a gorgeous winter sun shone through the giant picture window lighting up the scene. The guitars were gently eased from their cases and Gerry, Norrie and Raymond ran through a few of the more soothing songs from their repertoires.

A military style cleaning/tidying up exercise ensued and by late morning everyone was ready to head for home. Only Neil had the constitution for the hills on the Sunday as he tramped up the local Graham of Meall Dearg.

Raymond, Cowboy, Alan and Ian had a stroll round the Birks of Aberfeldy to pay homage to Robert Burns before heading home.

The success of the weekend was illustrated by the unanimous agreement to return to the same venue in January, 2018.