Nestling serenely at the South West corner of Loch Ossian in the Corrour Estate sits the splendid SYHA Loch Ossian Youth Hostel. Accessible to the public only by rail, foot or bicycle this was the venue for the club’s December meet on 2nd/3rd December 2016. 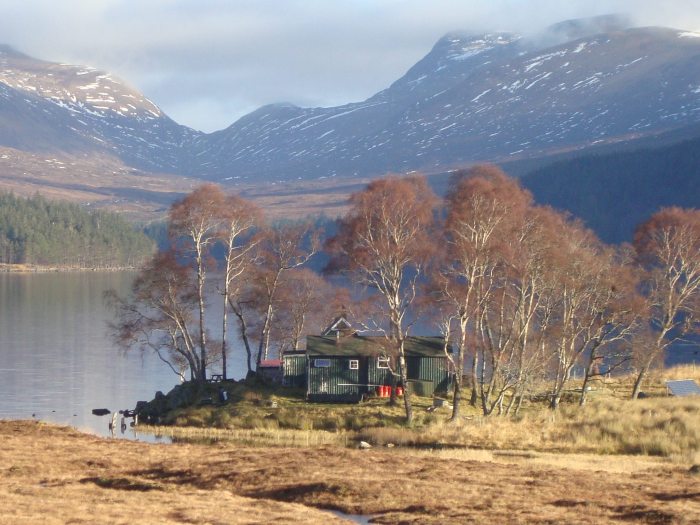 Catching the worm on Friday morning, early birds George, Susan, Norrie, Douglas and Ian drove over to Rannoch station to catch the mid-morning train to Corrour – from which the Hostel is only a 15-minute walk. Initially misty, the sun broke through during their short train journey revealing superb views westwards over Rannoch Moor to the Black Mount and Glencoe. 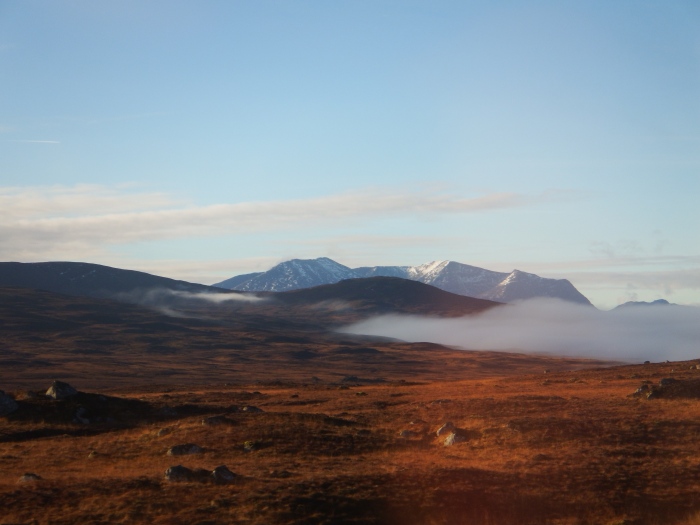 As Ian, Norrie and Douglas strode over to check in at the Hostel, George and Susan had the Corbett of Leum Uilleim in their sights. This Corbett is only just shy of Munro height and is usually climbed directly from Corrour Station. The first 50 metres of the walk is familiar to millions of movie fans from the film Trainspotting and over the course of the weekend there were several attempts to re-enact Ewan McGregor’s famous scene when he describes just what it’s like being Scottish!

The Corbett itself affords great views over Rannoch Moor in all directions, particularly over to Ben Nevis (for the benefit of any doubt!) and George and Susan made short work of it before heading down to the Hostel.

In the meantime, Ian, Douglas and Norrie aimed for the Munro of Beinn na Lap to the North of Loch Ossian. It was Douglas’ first hill for some time but the going was fairly easy, if slightly boggy and soon they, too were drinking in the spectacular vista.

Neil, with his Mary Poppins panniers cycled the long road in from Glen Spean in the North. He also climbed Leum Uilleim before descending to the Hostel.

Alan, James, Jim, Raymond enjoyed a slightly longer train ride, having driven to Crianlarich and taken the train to Corrour from there. Paul had driven up to Rannoch and met the other four on the train. The extended journey afforded them the opportunity to relax and enjoy a refreshment en route. Their later arrival meant that their hillwalking powder would be kept dry until the next day.

Similarly, Ally and Rowena arrived on a later train – but in their case from the North via Tulloch Station in Glen Spean.

The evening was passed in the usual fashion with plenty food, drink, conversation and song to pass the time away.

The next morning an early start was made by Rowena, Jim, Raymond, Susan and George. Five Went Corbett Bagging and their cunning plan was to take the early train back out to Rannoch, drive the vehicles 2km East to end of The Road to the Isles track from where they would be picked up the following day as there were no morning trains on Sundays in winter. . From there they headed north up the track and gained the ridge of the Corbett,  Beinn Pharlagain. From there the Munros of Sgor Gaibhre and Carn Dearg were in their sights taking them back down to the Hostel.

In the meantime, when Norrie was finally roused from slumber, he, Ian, James, Neil, Alan and Douglas set off for the same two Munros directly from the Hostel. A track was ascended to the memorial plaque at Peter’s Rock from where fairly easy angled slopes took them up to the summit ridge and the huge summit cairn. 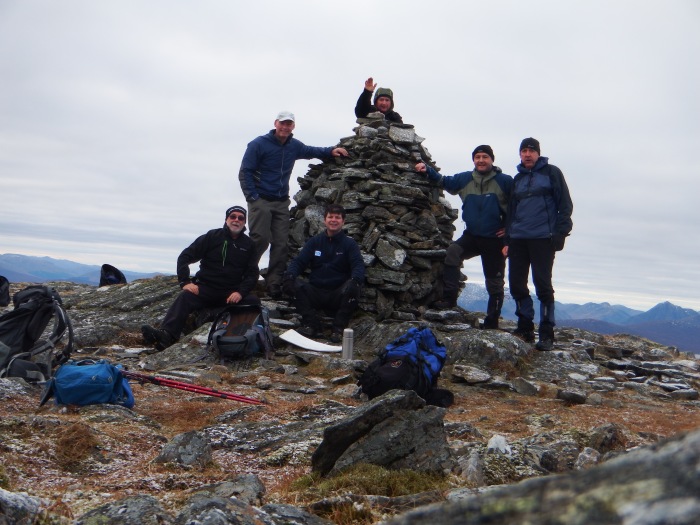 Alan had had to abort a few walks in previous weeks due to his injured knee, so was elated to get to the summit unhindered. Douglas entertained the thought of heading back to the Hostel from there but the walk between these two Munros is fairly effortless and he was persuaded to continue. Neil planned to continue from Sgor Gaibrhe down to the East end of Loch Ossian, then over Beinn na Lap and return to the Hostel having circumnavigated the loch by the “haute route”. He therefore set off ahead of the others.

The easy pull up to Sgor Gaibhre saw the group arrive at the summit at the same time as the early starters. The opportunity  was taken for some group photos and some debate on route finding before the parties headed their separate ways again.

As the elite squad headed for their second Munro of the day, the B team commenced their long slog down to the East end of the loch and back along the track to the Hostel. The prospect of a thirst-quenching beer was deemed more important than camaraderie and poor Alan, on his first outing for months was left to struggle back the long miles on his own. 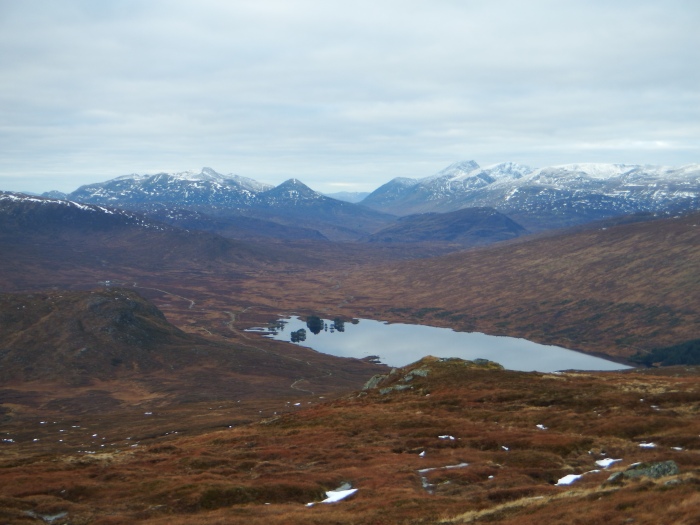 Raymond reported back that Alan was soldiering on  manfully as he passed him on his post-walk run round the loch having earlier passed Norrie taking photographs of the heather.

Ally wanted to continued his mission towards Munro completion and on the Saturday he headed north to bag Stob Coire Sgriodain and Chno Dearg – an impressive trek from the hostel. Clearly he didn’t want to weigh himself down too much and left his camera behind.

Paul had been suffering from a painful back and was unable to join the groups tackling the Munros but he was able enough to take a solo stroll up Leum Uilleiem and enjoy the views of Ben Nevis. On his return to the Hostel  he underwent some reasonably priced but effective treatment to ease his back pain..

Spirits were high and heartily consumed on Saturday night, with George ensuring that the group didn’t get too cold. At one stage Stevie Wonder and Kenny Rogers performed a duet.

Douglas’ spirited version of Wagon Wheel unfortunately was not recorded for posterity.

Sugar Ray Henderson and Hurricane Fraser fought off for the 45 Degrees super-heavyweight title – unfortunately both of them could only float like curling stone and sting like a daffodil and the bout was drawn. 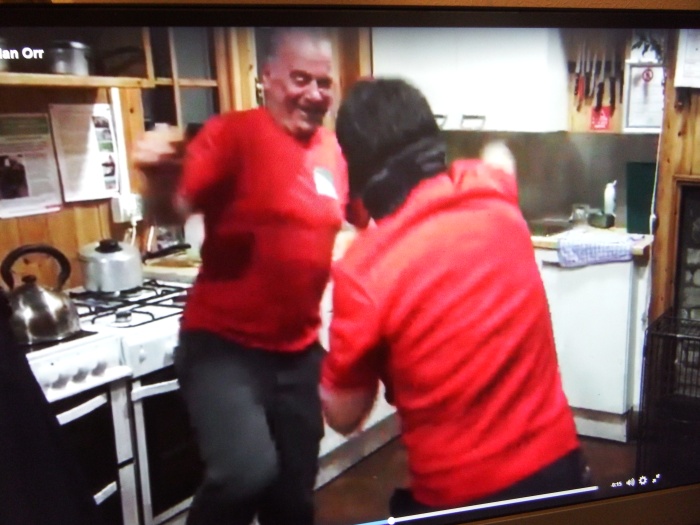 Unfortunately, Ally was feeling unwell and had to have a lie down in the dorm. Norrie and George also succumbed early  (with George sneaking the McGrandles Cup) leaving Raymond to run through his repertoire on guitar.

The next day was Sunday Morning Coming Down the Railtrack as Paul had to head out early to get back home.

Douglas, Ian, Susan, George and Norrie set out on their 12k return initially up to Peter’s Rock and down the Road to the Isles to where the cars were parked.

Jim, Alan and James had decided to wait for the evening train and took their opportunity to bag the Munro of Beinn na Lap from the Hostel. 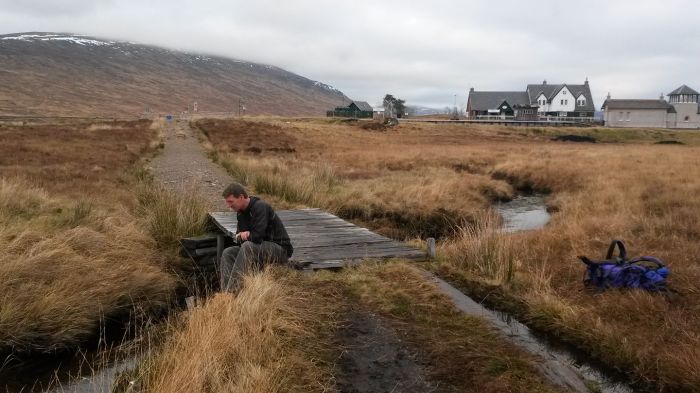 Ally and Rowena were booked into the Hostel also on Sunday night and  with Ally still under the weather on the Monday, Rowena undertook a solo stravaig to Staionaig Bothyon the Abhainn Rath which flows into the South end of Loch Treig.

Another great weekend had passed and with Christmas and New Year on the horizon, everyone was happy to get in some much needed exercise. 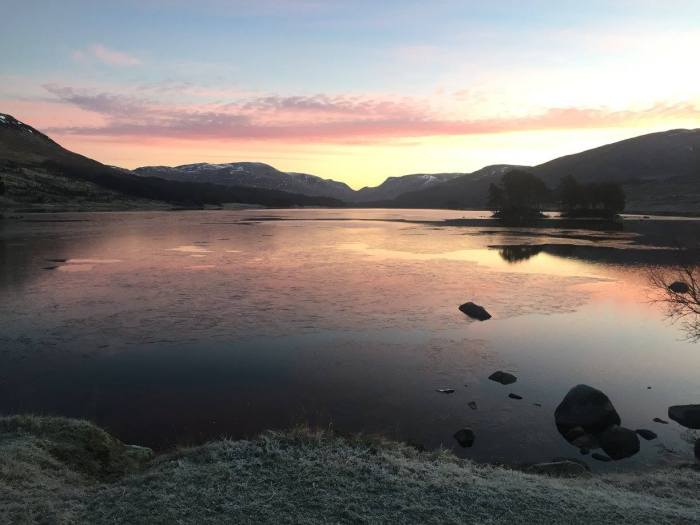