Kinloch Rannoch Outdoor Centre was a new location for a Club visit. Sitting conveniently (for some) in Highland Perthshire it is very well equipped with dorms sleeping up to 24, five showers, a large kitchen and an expansive lounge. 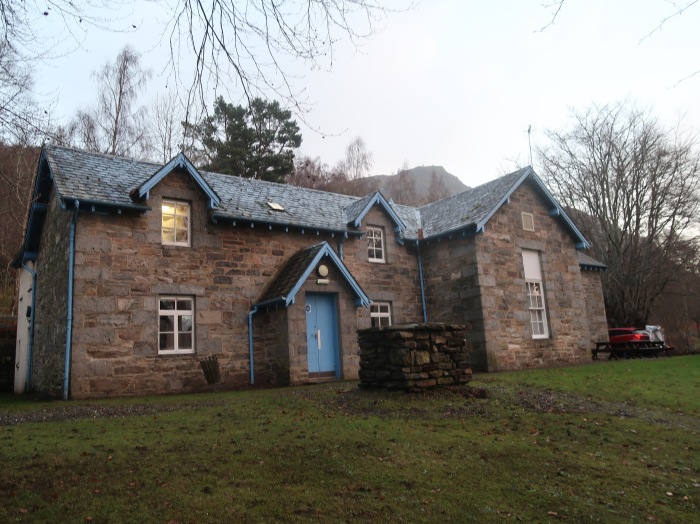 The Perthshire contingent of Norrie, George and Susan had made tentative plans for a Friday afternoon leg-stretcher but with the unfavourable weather conditions prevailing, a fish and chips lunch in Pitlochry won the day.

Despite the dreich weather there was no chance of a sombre evening in prospect. Raymond had invited along Falkirk’s Dougie Smith aka “One Man and he’s Doug”, a Bairn and a bard to provide some plugged-in entertainment – guaranteed to ensure that spirits were raised (and drunk!). Dougie had brought along his trusty Road Manager and bodyguard, the affable Gordon Haining. Fortunately, the audience were mostly well behaved, if a little boisterous and nobody was asked to leave the premises.

As members arrived during the evening, the show began, and Dougie treated them to a couple of excellent sets of traditional/Scottish folk songs and a few originals. The Club were privileged to hear an early performance of Dougie’s hilarious song – Big Wullie – detailing the adult exploits of Oor Wullie – all after the 9.00 pm watershed of course.

As the evening progressed, inevitably a few members decided that Dougie required some assistance and grabbed the other mic to provide some tuneful harmonies! 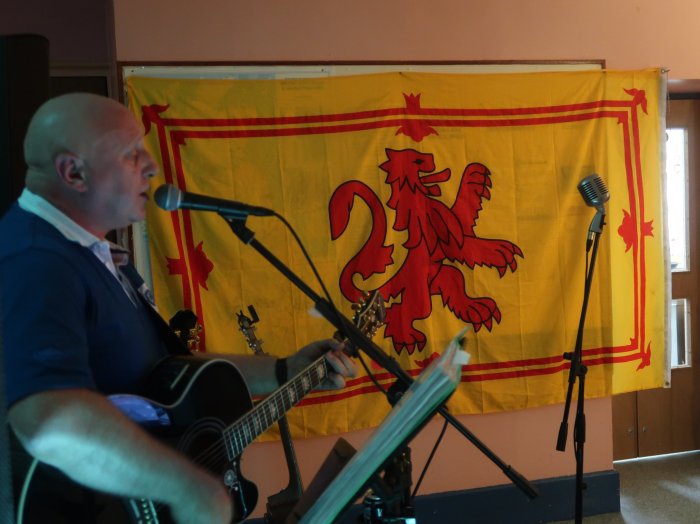 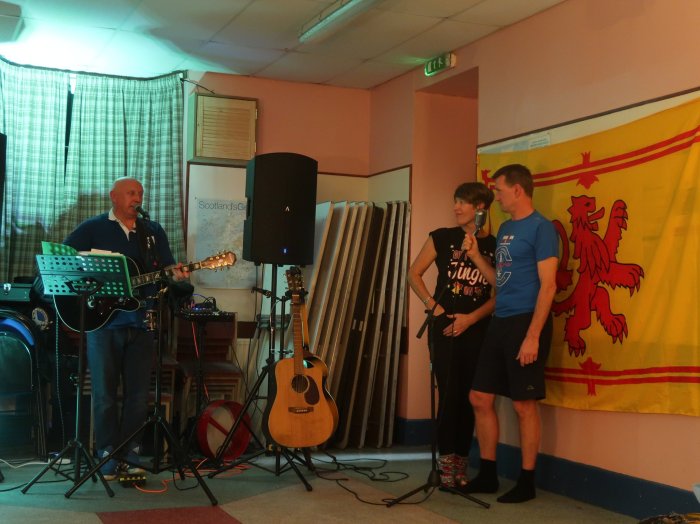 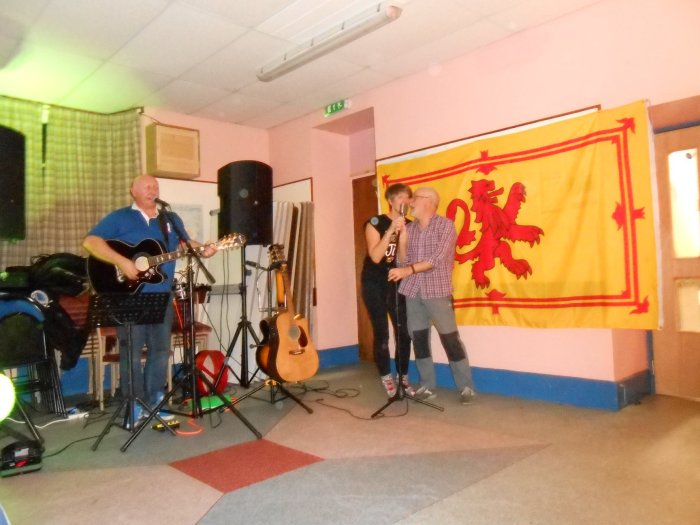 The generosity of Club members is legendary and during the evening Alan was presented with a replica kit of his favourite football team – though perhaps a few more 5k runs will be required before he is able to wear it. 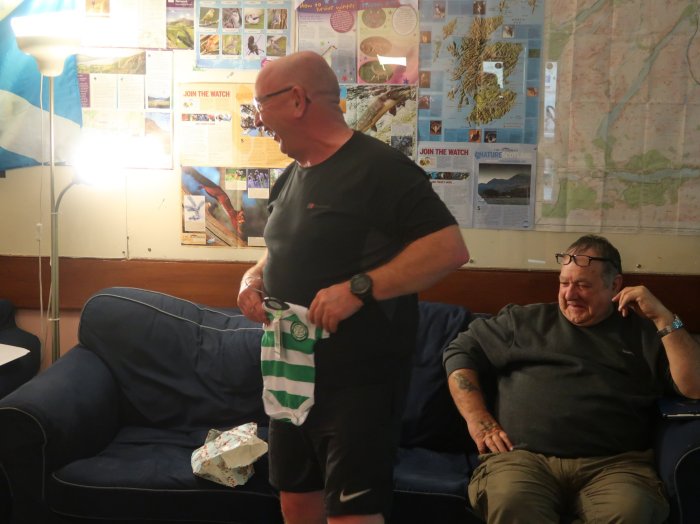 Saturday dawned and there was no real improvement in the weather – but at least the rain wasn’t lashing down.

George and Susan had hatched plans to climb the Munro of Beinn na Lap in the window offered by the train time-table between Kinloch Rannoch station and Corrour. Unfortunately, they had reckoned without the change to the winter time-table and Beinn na Lap would have to wait for another day. They had to be back home that evening so settled for a wee stroll up Struan Hill on their way back over to the A9. 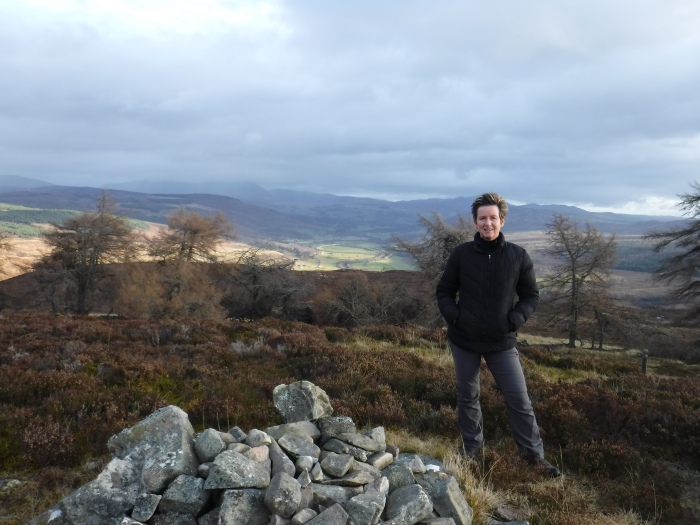 Raymond and Alan hitched a lift with them a few kilometres along the B847, with a drop-off giving them a good start to their chosen hill, Beinn a’ Chuallaich – a Corbett sitting directly above Kinloch Rannoch. The going was steep though as Strider and Frodo marched purposely up the slope to reach eventually the large cairn and trig point. After their descent they donned running gear and did their obligatory 5k December run. 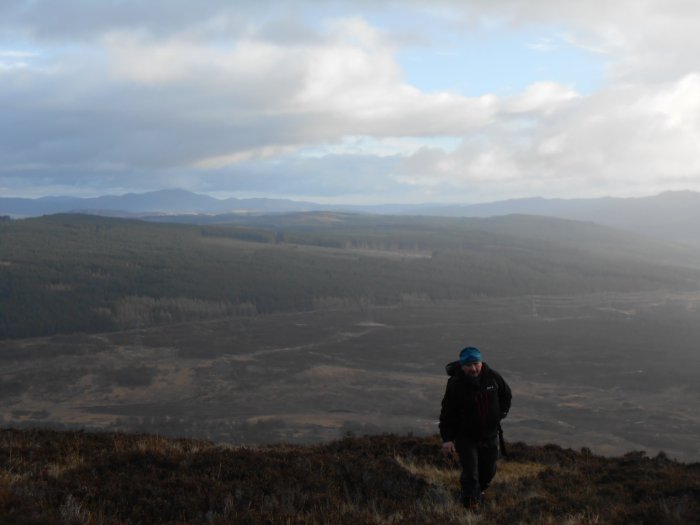 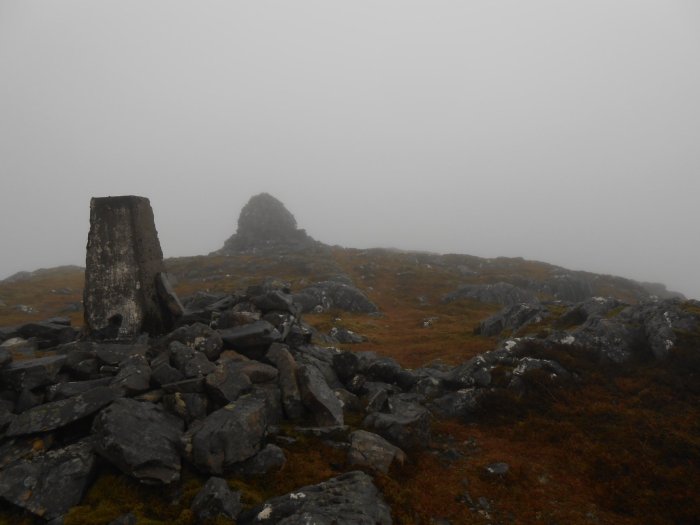 Neil decided to give the higher ground a miss and he drove a few miles west along Loch Rannoch before stomping north for a reconnaissance on Ben Alder Cottage, the bothy on the shores of loch Ericht. He went on to visit the nearby Prince Charlie’s Cave where the Young Pretender allegedly hid from his enemies.

Norrie also didn’t fancy traipsing up any Munros in the glaur and initially planned a walk in to Duinish bothy at the southern end of Loch Garry. However, George had told him the night before that there was a Graham at the side of the track so he decided that would be a better option. As he headed north, he eventually got out his map. There was a point at 612m on both sides of track – which was the Graham? After a bit of head scratching, he decided that the hill to the west probably didn’t have sufficient descent from the Corbett of Beinn Mholach to justify Graham status, so he headed up the eastern peak, Creag a Mhadaidh – for once his decision was correct which was confirmed on his return to the Centre. 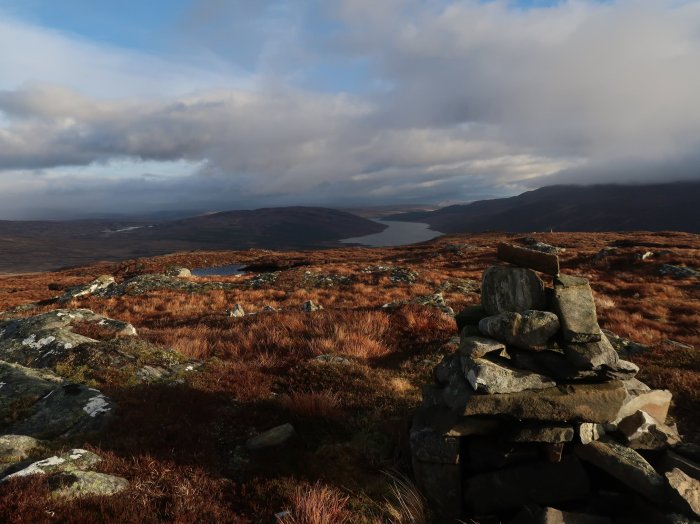 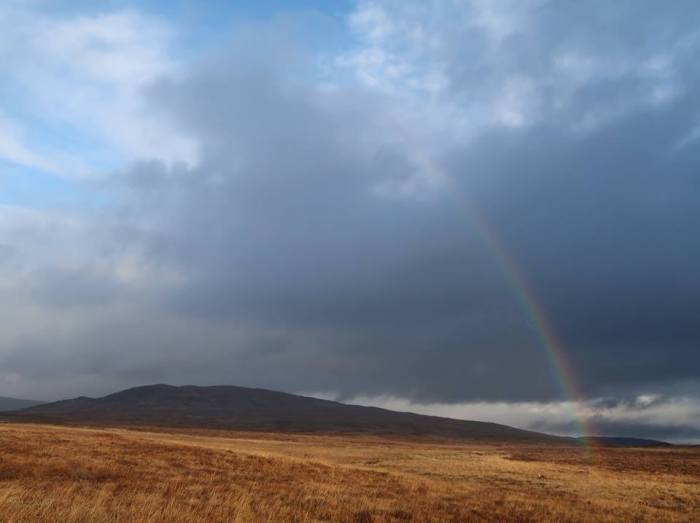 Being a bit more adventurous, a posse consisting of James, Donna, Jim Hughes, Ian, Gerry and Pete, who had driven up that morning, shot off for some wacky rally practise on the way up and over to Glen Lyon and the Giorra dam at Loch an Daimh. With the dam sitting at around 450m , the Munro of Meall Buidhe requires a climb of only around 550m albeit over some pretty boggy and tussocky terrain. Accompanied by a quintet of hairy hillwalkers, Donna braved the damp and muggy conditions to complete her 4th Munro. Normally a great viewpoint, there was an opportunity only for soggy selfies and foggy photos before the slip and slide back to their cars. 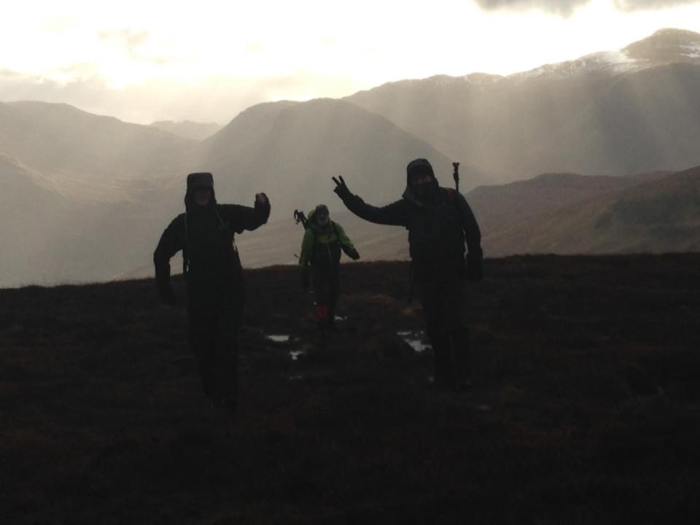 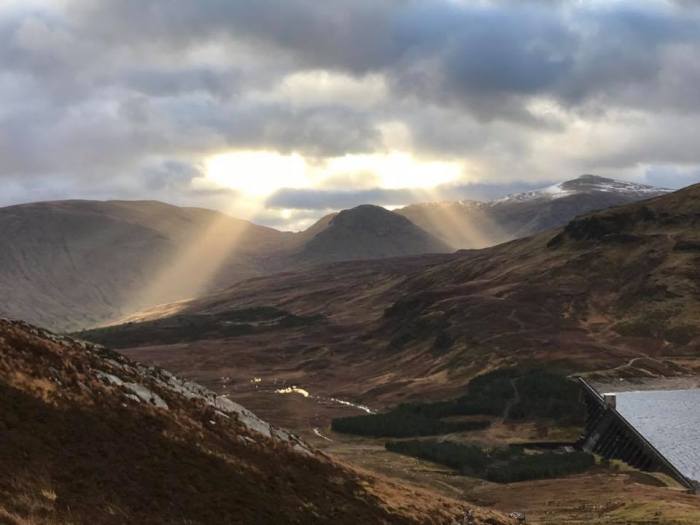 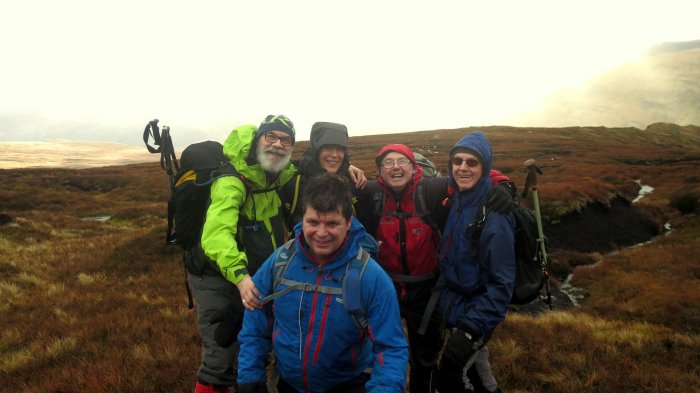 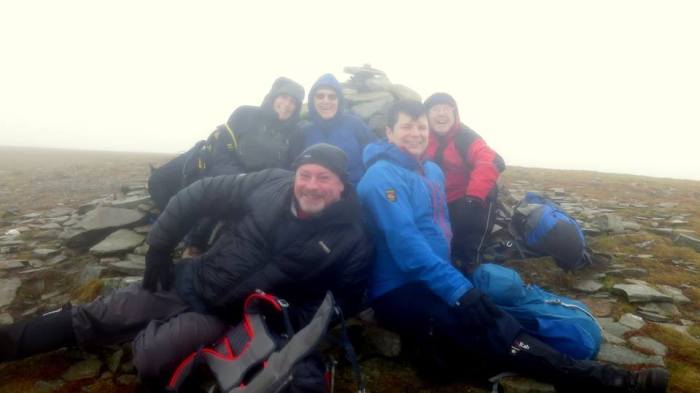 The final duo of Lorn and Jim Aire had the most adventurous day in prospect as they took the road west to Loch Eigheach where the Road to the Isles, now a land-rover track, would lead them up to the twin Munros of Carn Dearg and Sgor Gaibhre. Keeping to the higher ground on the way back south they traversed the Corbett of Beinn Pharlagain, its highest summit, Meall na Meoig and finally the sub-2000 rounded lump of Sron Smeur before dropping back down to their car. That would have been more than enough for any human but Lorn’s agenda saw him run back the last section to Centre to keep up his December challenge of a 5k run each day (like Raymond and Alan). 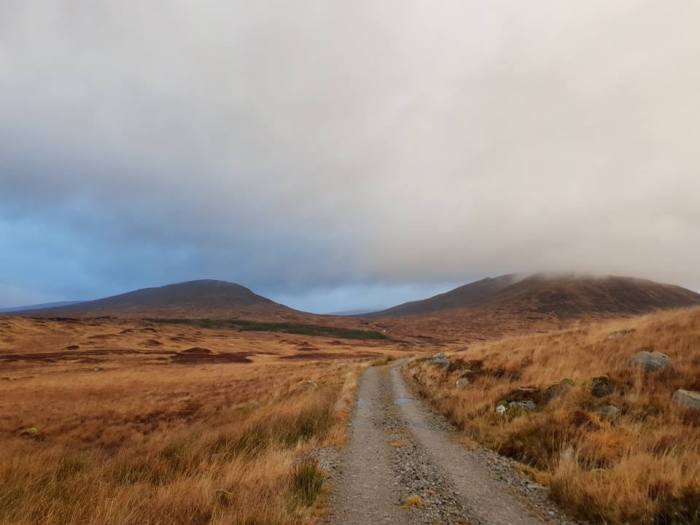 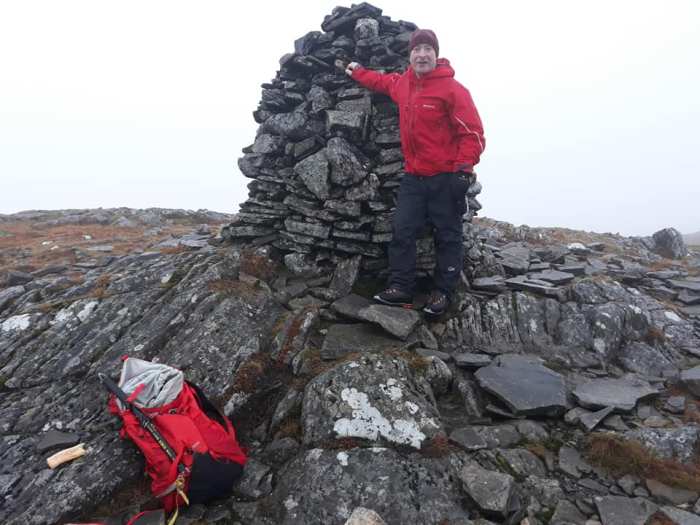 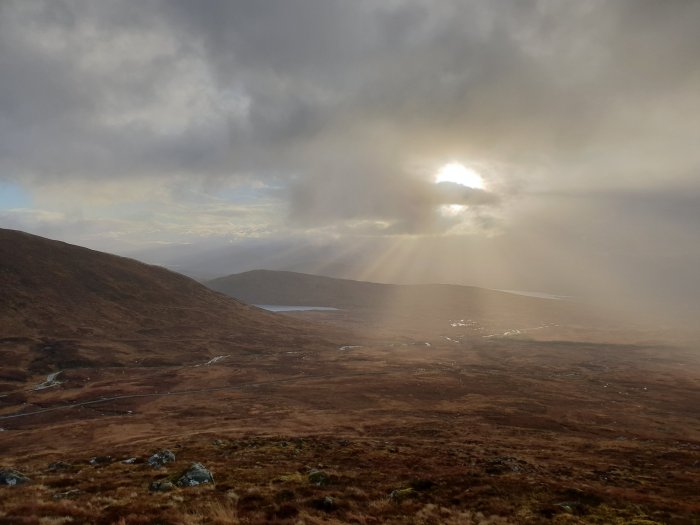 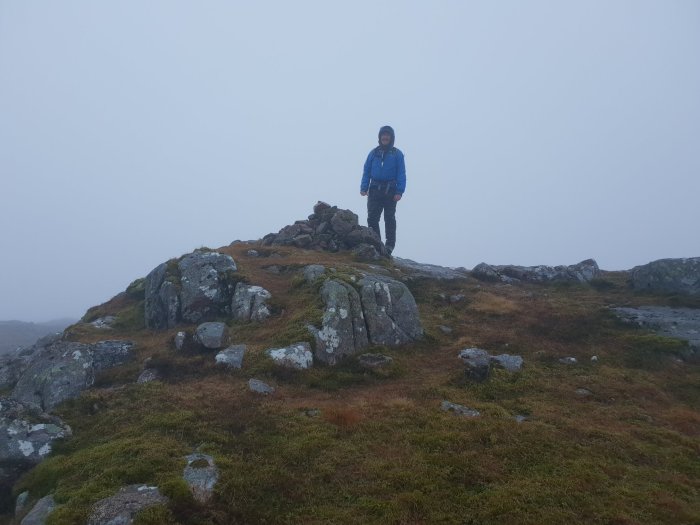 Once showered and changed, Raymond, Norrie and Alan decided to venture out the pub for a well-deserved beer. Unfortunately, the hotel in the village no longer has a public bar but a further 800k tramp along the road took them to the McDonald’s Hotel where a welcome (if expensive) beer or two were enjoyed. They were joined shortly after by Lorn and Jim Aire who were also in need of re-hydration.

Back at the Centre, it is painful to report, that the reputation of the Club was being blatantly sullied by the members who did not venture out to the Hotel. While the others were drinking beer and watching football on BT Sports, the guilty group were sipping cups of tea and watching the DVD version of The Jungle Book on the Centre’s TV. Letters regarding future behaviour have been sent to those in question.

Another generous gift was presented during the evening, this time to Norrie. Another addition to his collection of orange hats would ensure that would be easier to find the next time he wanders off. 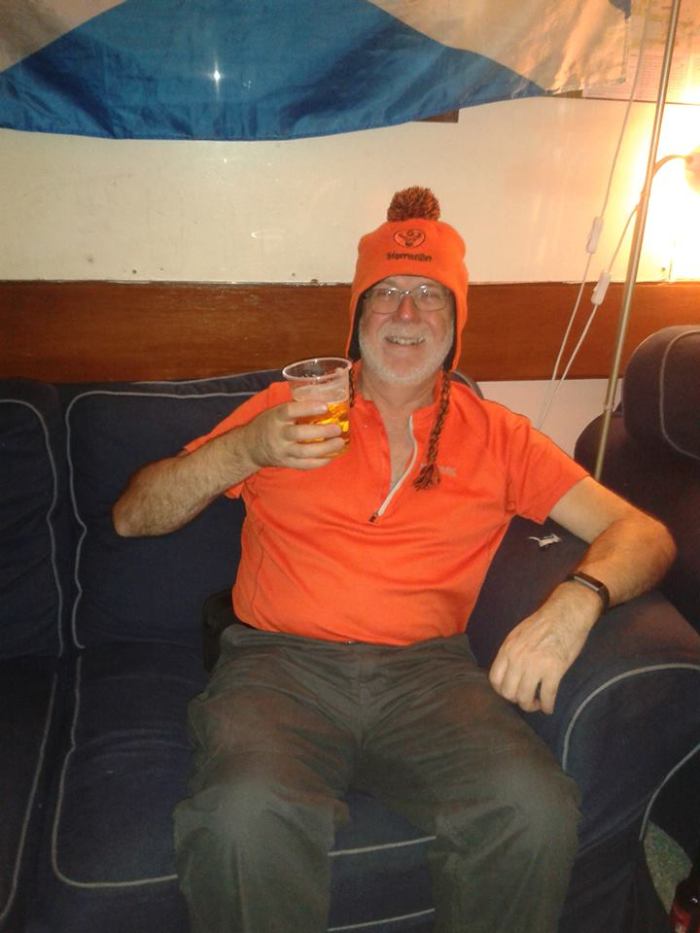 For the rest of the night, the guitars and mandolins were once again produced as most members of the party took a turn on lead vocals – with Lorn’s heartfelt rendition of Sunshine on Leith surely the highlight of the evening (along with Ian’s natty Xmas shirt, that is).. 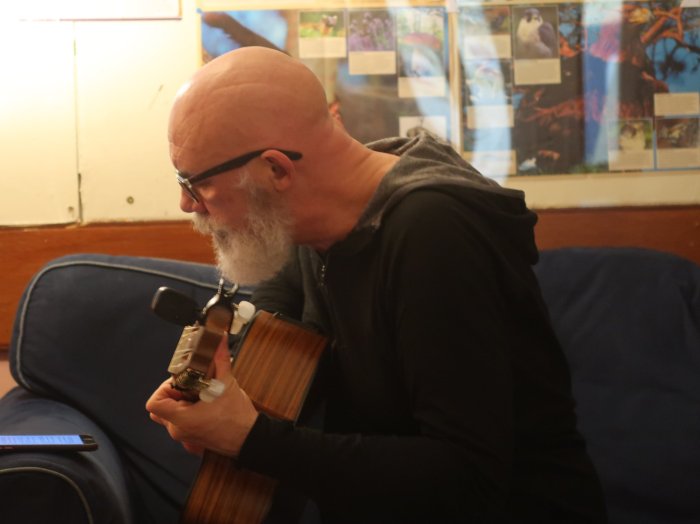 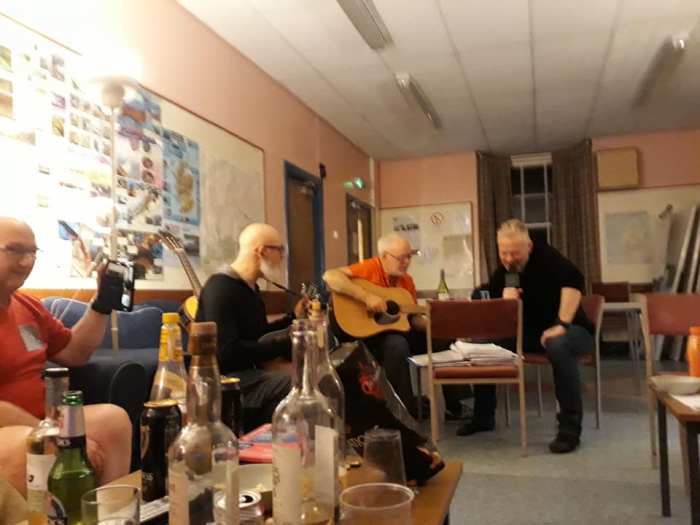 The next morning dawned, typically much fairer and the great fairy hill of the Caledonians aka Schiehallion which overlooks the village looked splendid in the early morning sun. However, everyone had other plans for the day and nobody was tempted to head up into the nearby hills, but once again an excellent weekend would keep a smile on the faces of everyone as the drove home. 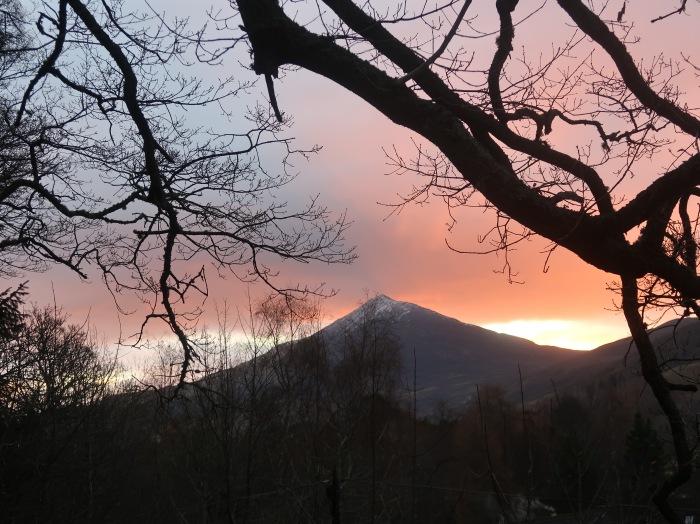