Rothiemurchus Lodge sits in the foothills of the Western Cairngorms, accessed by a track leading up from Loch Morlich. The lodge is a former military establishment which has been extended to provide self-catering accommodation and is superbly located for an assault on the mountains surrounding the Lairig Ghru. This was the club’s first visit to this establishment and we were located in the ground floor of the Union Jack Lodge. The dorms were extremely comfortable with ample showers and toilets. A fair-sized sitting room adjoined a large kitchen equipped with some pretty heavy-duty cooking facilities. 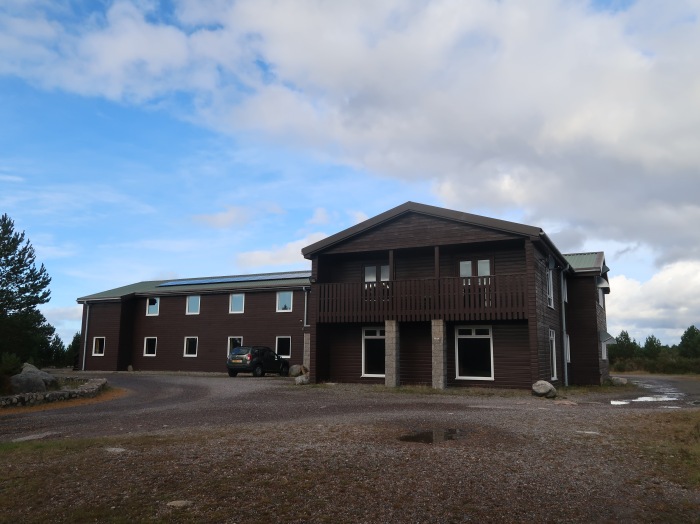 The Friday of the meet saw little hillwalking activity amongst the membership on their way up to Rothiemurchus. An exception once again was George and Susan who tackled the Monadh Liath trio of Carn Dearg, Carn Sgulain and A’Chailleach (not to mention a demoted top) from Glen Banchor, near Newtonmore. Beautiful sunshine was enjoyed (after they had descended!). 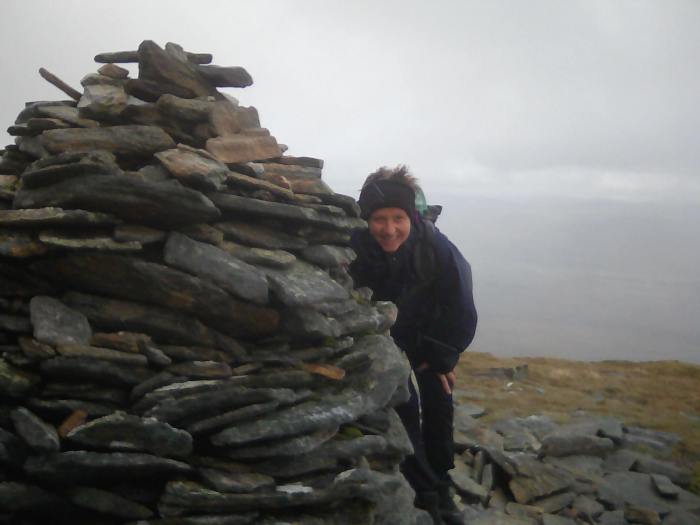 Also walking on Friday was Lorn who stopped off at Dalwhinnie on the way north to venture up the slopes of the Corbett, The Fara who’s long ridge runs parallel to the North West slopes of Loch Ericht. His timing was immaculate and some great views were enjoyed.

Those attending arrived sporadically during the evening (with a few not managing up until the Saturday) and a typical night was enjoyed with a few drinks and a few songs courtesy of Norrie and Gerry. Raymond was extremely chuffed to receive a bottle of appropriately-named whisky from George.

The North East ridge of Angel’s Peak was the main objective for the majority of the members on the Saturday, with various options available once the high Cairngorm plateau had been attained. The main Lairig Ghru path is reached less than a kilometre from the Lodge and a reasonably early start saw John, Susan, Alyn, George and Norrie head off for the distant An Garbh Choire where the newly renovated MBA shelter sits just below the ridge. Before too long Bill had caught them up followed by Lorn and Raymond together with his two wee Jack Russells.

A very decent pace was being set, at least in the eyes of some. Bill decided to claim the carers allowance for that morning and held back to chum Norrie along the track, then over the Dee and the Allt a Garbh Choire to reach the shelter where everyone congregated for a breather and some welcome nourishment was taken on board before the scramble up the ridge. The work done by the MBA on the shelter is very impressive, and though quite small it is superbly constructed to keep out the wind and weather. 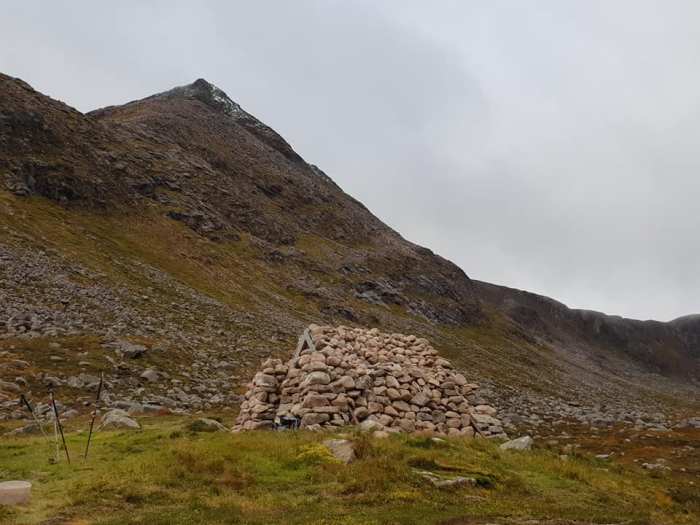 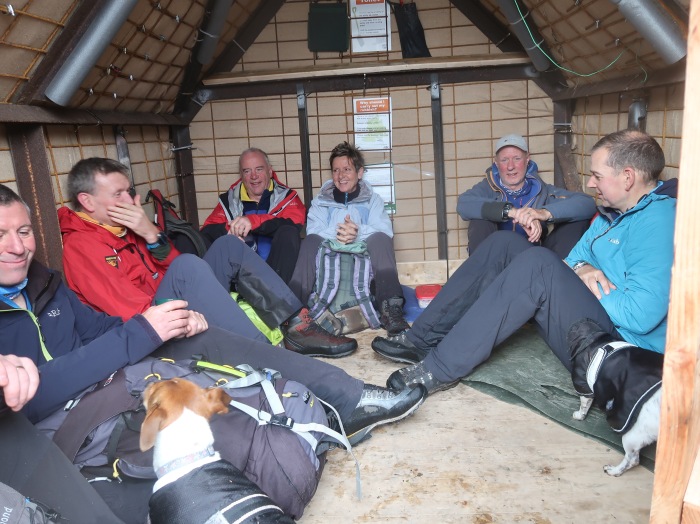 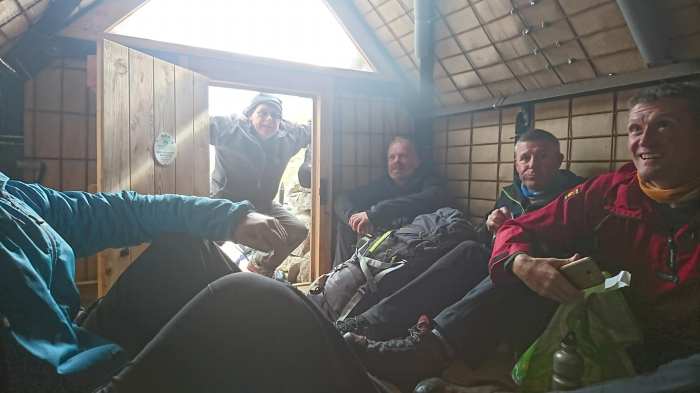 A steepish climb followed up to the impressive Lochan Uaine before the scramble proper begins up the ridge. It is certainly not the most technical scramble but interesting enough over the large granite boulders, particularly with a fresh covering of snow on the upper section. The location though is breath-taking – in more ways than one.

Not everyone completed the ridge totally unscathed though.

Norrie was the last to clamber to the top – with even Erin, the elder dog looking back in disdain at his efforts. By the time he reached the summit the others had headed off south east to the summit of Cairn Toul. This time John took on the minders role as the pair began the traverse across the snowy plateau to Braeriach. In the meantime, Alyn, then George and Susan caught up after their diversion to Cairn Toul and a few minutes were spent at Braeriach’s summit breathing in the grandeur of the dramatic landscape. 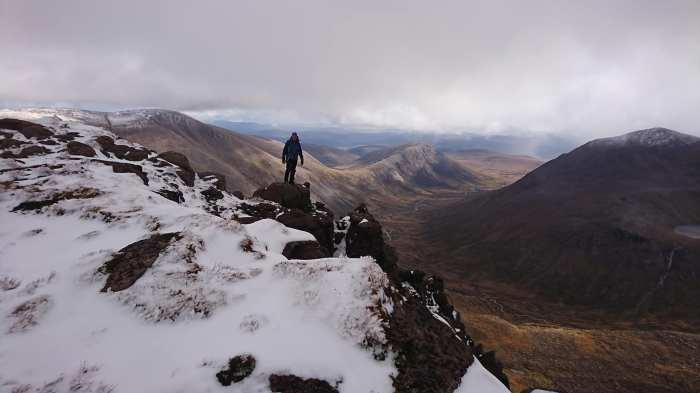 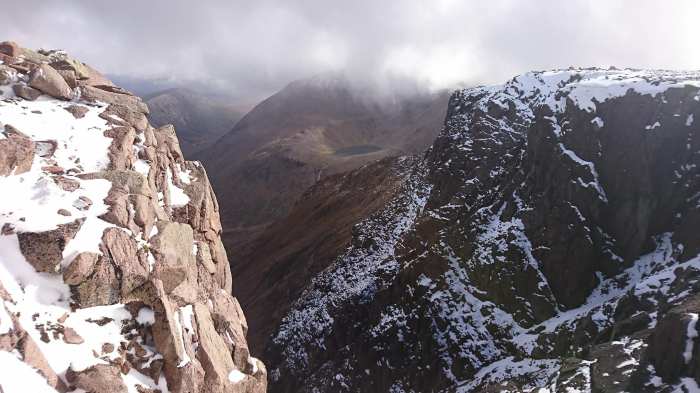 With the Lodge a distant 8k away, a long tramp back to base commenced, with quite a variance in the time taken for the descent.

Raymond and Lorn continued South East from Cairn Toul to the Devil’s Point at the southern end of the plateau. From there, a swift descent to Corrour bothy followed with a very long trek back north up the Lairig Ghru ahead of them to complete a 12-hour day. For some though, 12 hours was just too long.

They would have been a bit quicker but they came across a couple of injured teenagers who were part of a Duke of Edinburgh group – much appreciated assistance was provided to aid them on their way back through the pass. Unfortunately, having arrived back at the hut, Lorn discovered his phone had been lost. It couldn’t be found that night or the next morning, but karma did its job as it was found and handed in a few weeks later, fortunately for this blog with all the photos intact.

Bill also headed down towards Devil’s Point. He had an upcoming Nepalese trip and wanted a big day to build up his stamina for his Himalayan expedition. He crossed the Lairig Ghru and ascended  Ben Macdui enjoying a snowfall before making a descent back down to the pass and striding back to the Lodge for a well-earned refreshment.

Gerry and Jim had other plans and jumped into a car on Saturday morning to drive round to the ski centre car park. From there they skirted the shoulder of Cairngorm before dropping off to Loch Avon and a steep climb followed up to their ultimate goal, the Munro of Beinn Mheadhoin with its distinctive tors dotting the plateau, the highest of them being the actual summit. 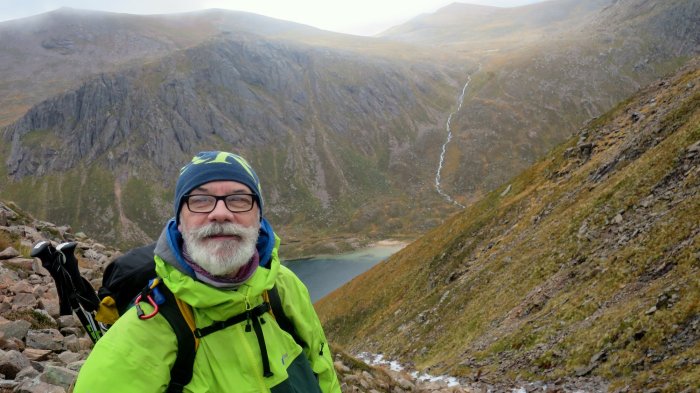 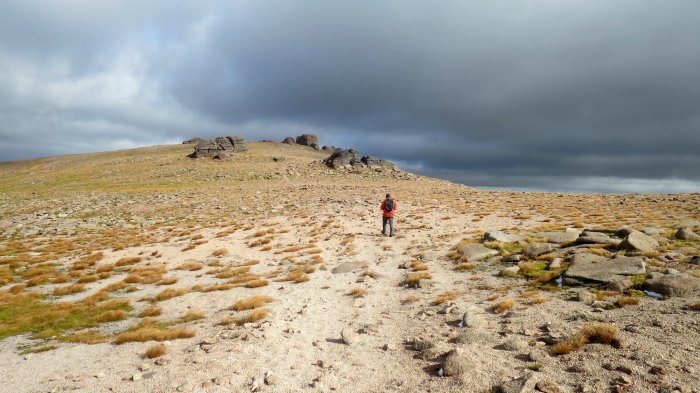 Ian and James planned a slightly less ambitious day and ventured out over the minor summits of Castle Hill and Creag a Chalamain stopping several times en-route to complete their magazine-cover photo shoot. Opinions differed though as to which magazine would be most appropriate for the photos and on which shelf in the newsagents it could be found. They dropped down to the Chalamain Gap and plodded their way back to the Lodge from there.

Rowena had plans for a longer walk as well but wasn’t feeling too great so she restricted herself to a reverse of the walk undertaken by male models Ian and James as she ventured up to the Chalamain Gap and back over Castle Hill.

The non-walkers in the party also had an enjoyable day test driving several vehicles in the car park before Jim Hughes arrived and drove them down to the nearest local hostelry.

In the evening there was great banter in the kitchen with Paul being presented with a t-shirt bearing his now-famous slogan.

In the main lounge a fairly relaxed night was enjoyed. Norrie was too knackered to get out his guitar so Gerry ran through a number of more laid-back songs to keep everyone entertained. A few harmonica players auditioned for the 45not3 Degrees band – with John getting the gig. He had clearly been practicing. 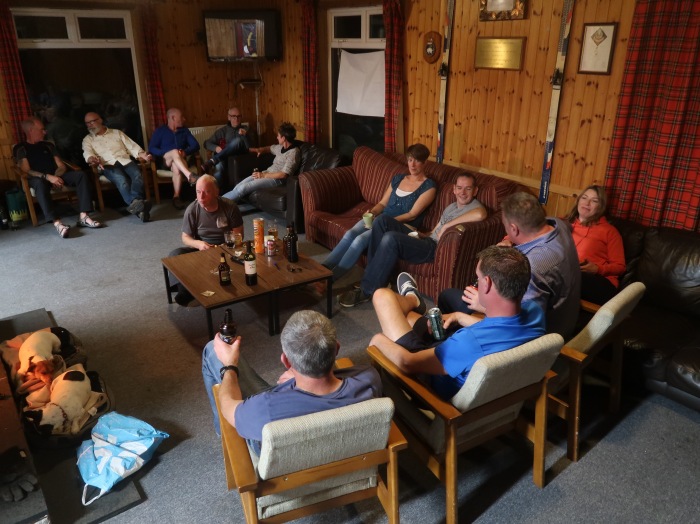 Most of the party headed home the next day, with only Bill and Rowena going for  a walk – albeit only for a stroll around the Craigellachie Nature Reserve, ideal training for the Himalayas…..not. 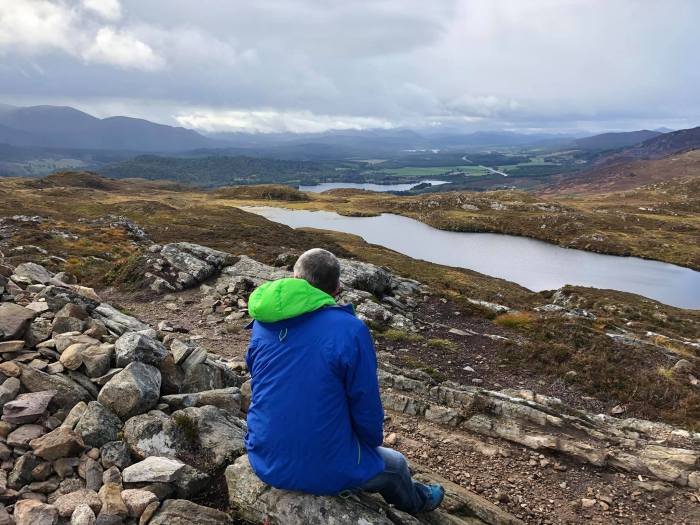 It had been another great weekend with a return visit sometime in the future definitely on the cards.