With no official club meet in July due to holidays etc, the show hit the road again in August with a first time visit to Ardvullin House in Ardgour, a short distance from the Corran Ferry terminal. The house itself was formerly a ghillie’s cottage dating from the 18th century.  It is owned by the HopScotch children’s charity which provides breaks to kids from challenging and stressful home environments. In summer the house is available for private lets – including the adjoining two-bedroom apartment. Following the meet, the club were more than happy to make an additional donation to this very worthwhile cause. 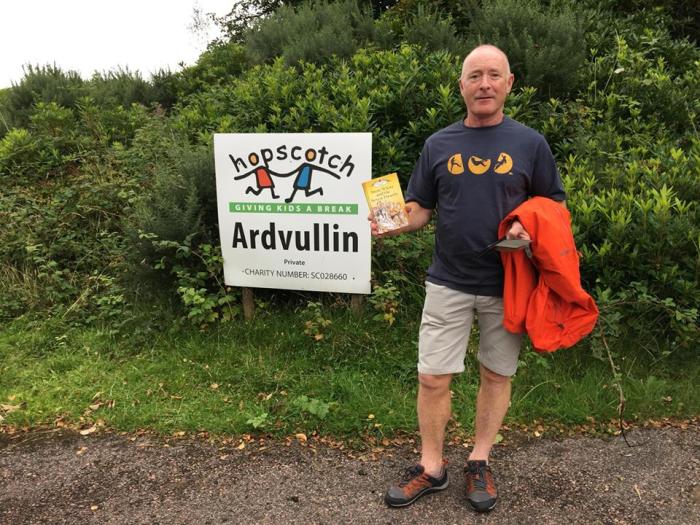 The house has excellent facilities for kids, and the older kids of the 45 Degrees MC were more than happy to make use of the attractions on offer. 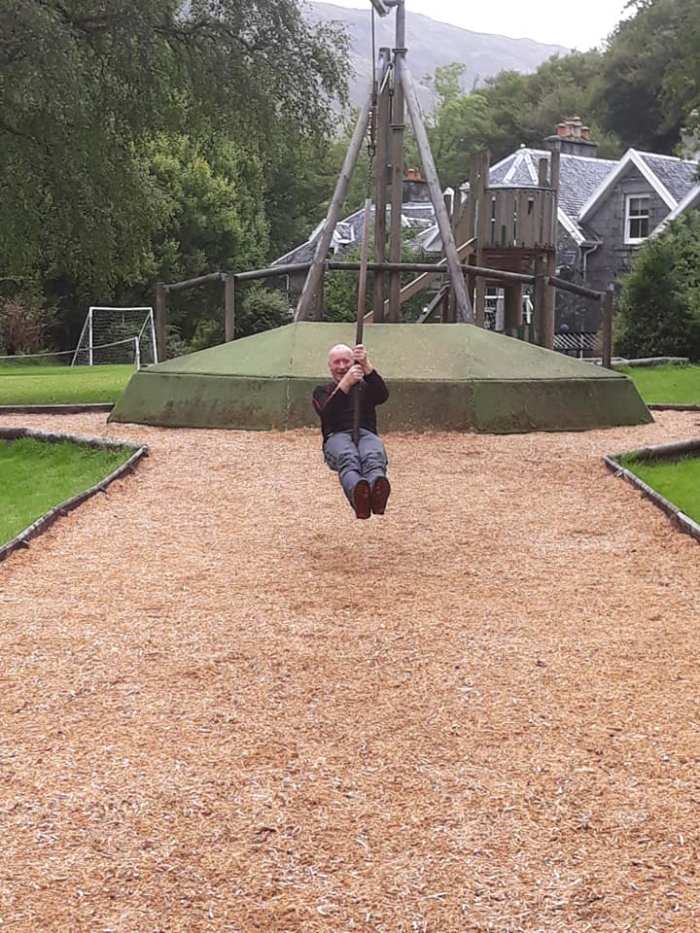 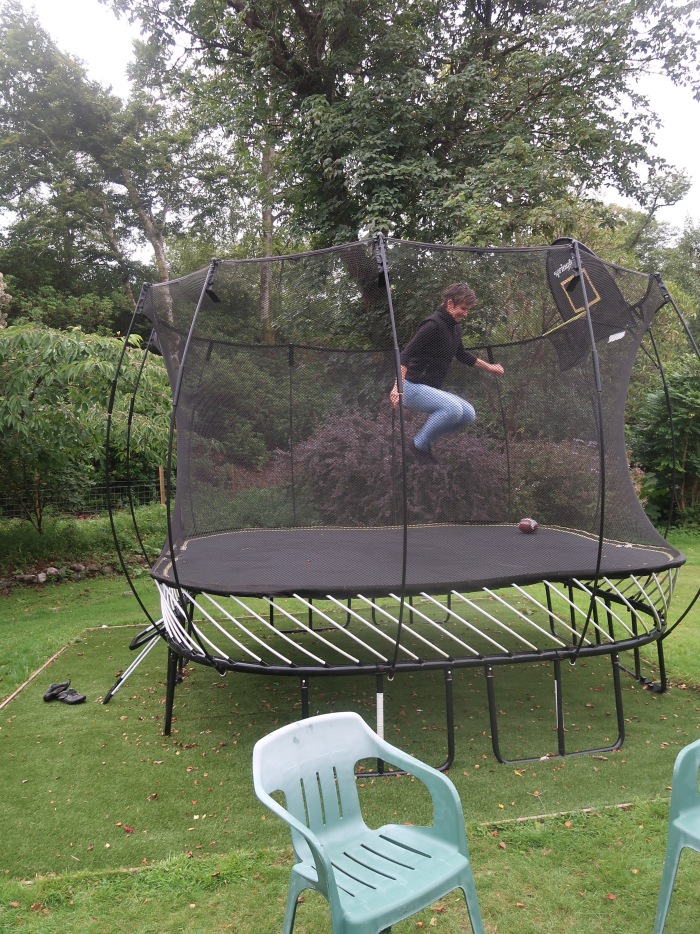 Lorn’s wife Elizabeth had recently celebrated a significant birthday and their friends and family reinforced the usual Club contingent – even though Elizabeth was initially told she was going camping. A barbecue had been organised for the Saturday night.

Ardgour itself, whilst a Munro-free area is a breath-taking hillwalking area with a rugged mountainous terrain with some classic hikes and climbs on offer.

It was great to welcome some new members to their first club meet – Adrian Mowat, Ania Borg, Alyn McNaughton and Pete Smith.

The early part of summer had provided some glorious hillwalking conditions and most club members had been taking advantage, sneaking off for various excursions to the Scottish hills and further afield. Unfortunately, by mid-August the weather was returning to more typical Scottish summer conditions and the forecast for the weekend was anything but encouraging.  A few tentative plans for walking on Friday had been hatched, then ditched as the inclement weather prevailed.

Norrie though, had his retriever Slioch in tow and he was not going to get away with not going for a decent hike. He broke his journey on the road over from Dalwhinnie to Laggan very close to the SMC’c Raeburn Hut. A 2k hike over moorland led to lonely Loch Caoldair, renowned apparently as a great wild swimming location. With a hint of autumn already appearing in the vegetation only one of the pair opted to try out their swimming skills. 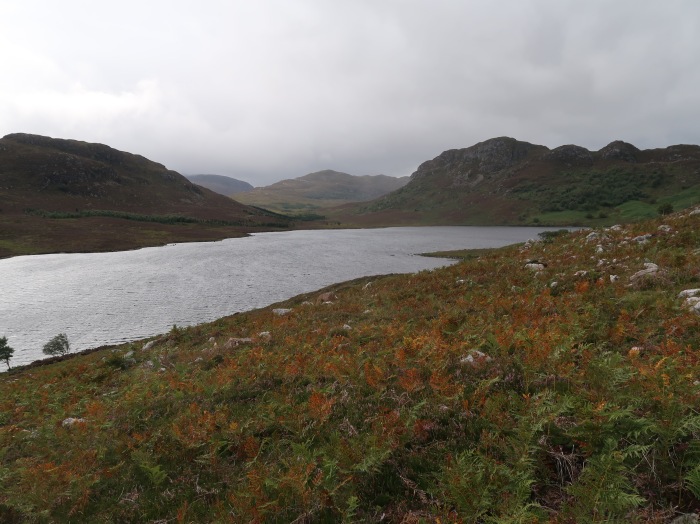 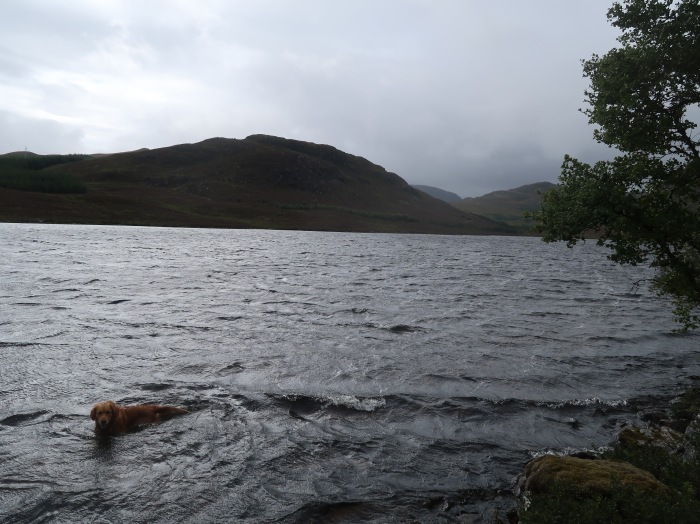 During the evening, the party arrived in dribs and drabs (except for Alan and Jim who arrived on Saturday morning) with everyone being hugely impressed by the premises, especially the large lounge with its large window overlooking the playfield. There were indoor games on offer too – a temptation a few members could not resist. Some though were happy enough just to sit on their own with a bottle of beer. 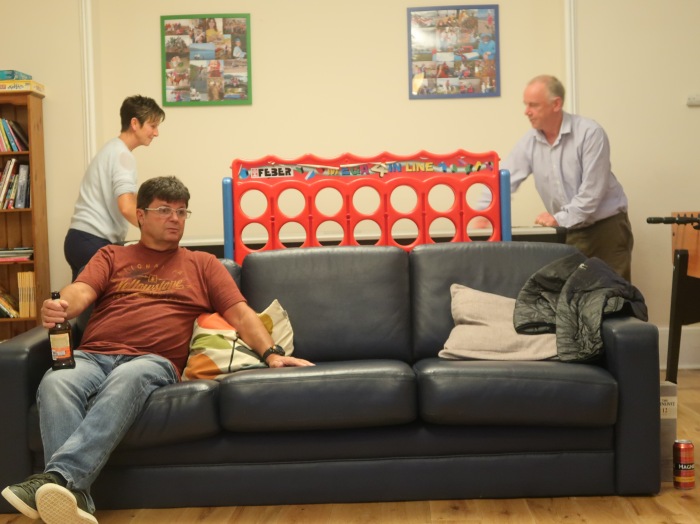 Later in the evening everyone congregated in the lounge and after the actual kids finished with the noisy air-hockey, Norrie and Gerry got the musical instruments out and a good old sing-song ensued late into the evening.

It’s fair to say that enthusiasm could have been higher on Saturday morning with grey skies and drizzle prevailing.

George and Susan would not be deterred though, and they headed off to drive the ten miles or so South East to Glen Galmadale from where they would tackle two Corbetts on their repeat list – Creach Bheinn and Fuar Bheinn. Although the weather was dank and claggy there were a few moments of clarity and they successfully completed their task.

With Jim and Alan arriving on Saturday morning and the rain putting them off tackling anything too ambitious, he and Alan opted for the wee hill on the doorstep, the Graham Meall Dearg Choire nam Muc and its marginally lower satellite Sgurr na-h Eanchainne which offers great views over Loch Linnhe from its trig point. 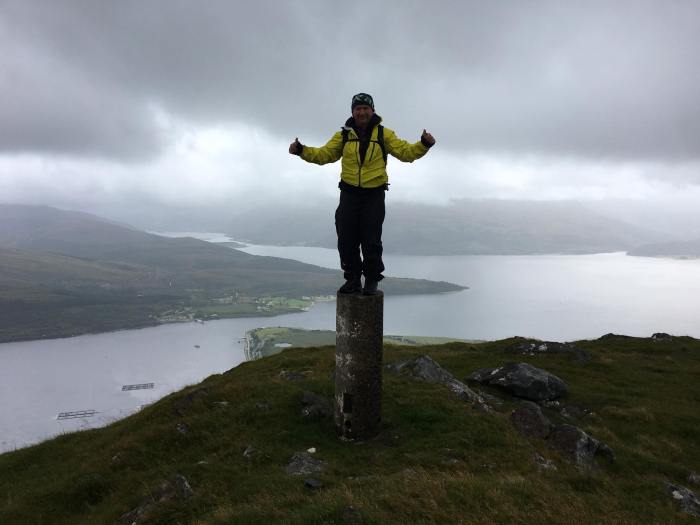 Norrie and Gerry had loftier ambitions. They elected to walk a couple of miles down the main road to Sallachan and head up Glen Gour to the distant Corbett, Beinn na h-Uamha, which although just reaching Corbett height presents a rocky ascent from the glen. A few kilometres up the glen though, Norrie’s enthusiasm began to seep out of his boots as quickly as the water was seeping in. With only very fleeting glimpses of their target appearing through the clag, the decision was taken to abort the mission and trudge back up the road to the house.

Garbh Bheinn is probably the finest mountain in Ardgour, rough and rocky with crags and gullies both inviting and fearsome as a few club members could confirm from previous visits. James, Ian and Pete determined to tackle this superlative peak. Likewise, Adrian and Ania also set off for Garbh Beinn’s slopes – as did John and Alyn who were pretty conversant with the mountain’s topography.

Despite the clag and the wet weather, the trio of Ian, James and Pete would not be deterred from their target and they tramped and trudged their way up the rocky slopes before finally attaining the summit cairn and the celebratory photos. 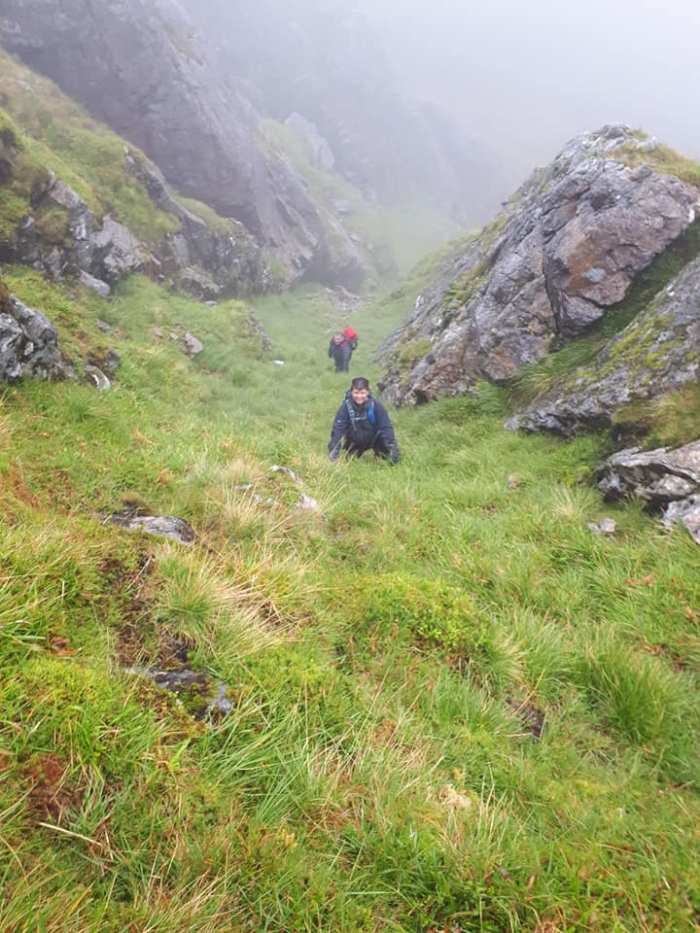 Further down the slopes they had met with Adrian and Ania who were also traipsing around in the wet heather and rock. They though decided that the summit of Garbh Bheinn could wait for a better day and elected to retreat and return to the house for a welcome shower. 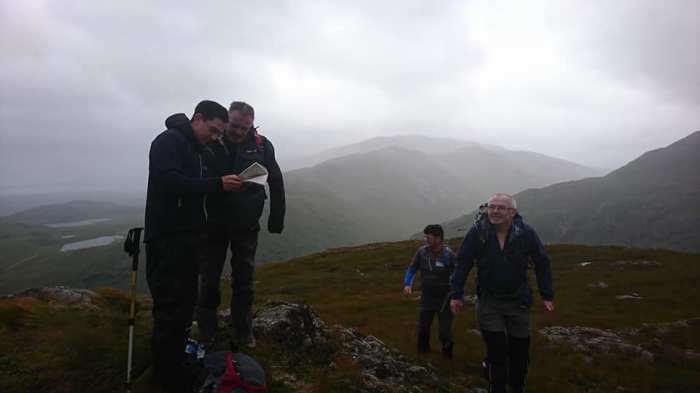 John and Alyn ploughed their own furrow up to the summit of Garbh Beinn via a lovely wee gully from Lochan an Iubhair. When they got to the top, visibility was extremely poor and the compass needle misbehaved to the extent that it almost guided them to an extremely quick and precipitous descent. Fortunately their experience and hillcraft emerged and they were able to negotiate themselves back down safely.

With Jim and Alan’s early finish and Gerry and Norrie’s retreat they were able to join Donna and Raymond, who had restricted his activities to a wild swim and cycle run, for a beer or two iand a game of darts in the Inn at Ardgour by the ferry terminal. During a quiet moment Alan took some time out to research his family history.

In the evening Lorn’s family had prepared an excellent spread to accompany the barbecue and with only a very fine intermittent drizzle a very enjoyable feast was relished. The hardy crew remained outside – albeit warmed by a blazing fire pit – whilst the others retired to the lounge.

With a room full of dressing-up gear it was only a matter of time before local good-time girl Alana Orr made her appearance having ditched her Cinzano for a can of Tennants.

As the evening wore on it all proved a bit too much for Norrie who quickly ascended Ben Slumber as Gerry and Raymond took over the entertainment duties as James plucked a few mandolin strings.

A nice lazy Sunday morning was enjoyed as the tidying up process began and by mid-day everyone had set off back to their homes having enjoyed a great, if slightly damp, weekend. All that is except Raymond who was staying up North for a couple of more days and cheered everyone up later by posting photos of how the Ardgour weather had greatly improved. 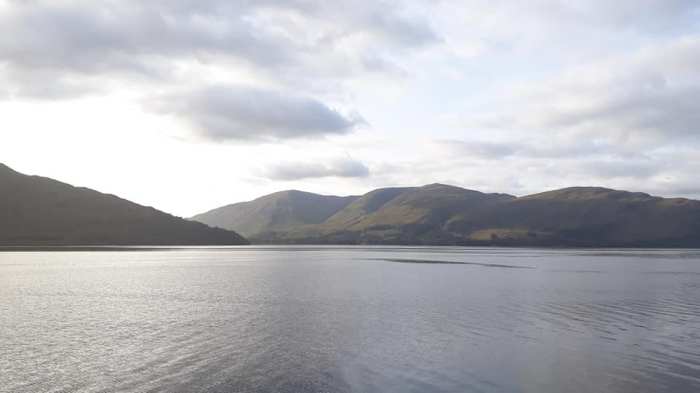 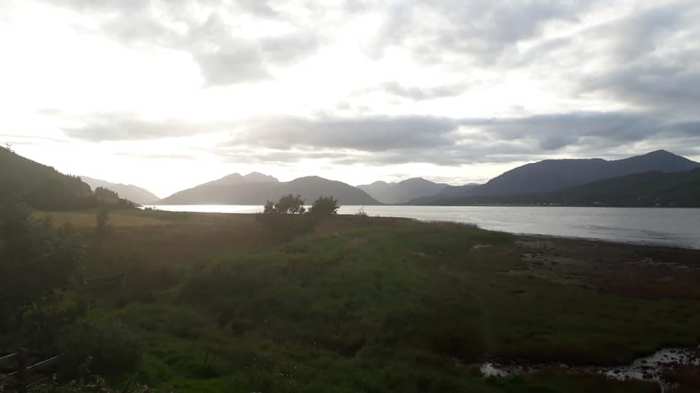 At one point a search party had been sent out for Pete – but the sight of his flip-flops on the shore line and the distant ripples in the water confirmed that he had only gone for a mid-morning wild dook. 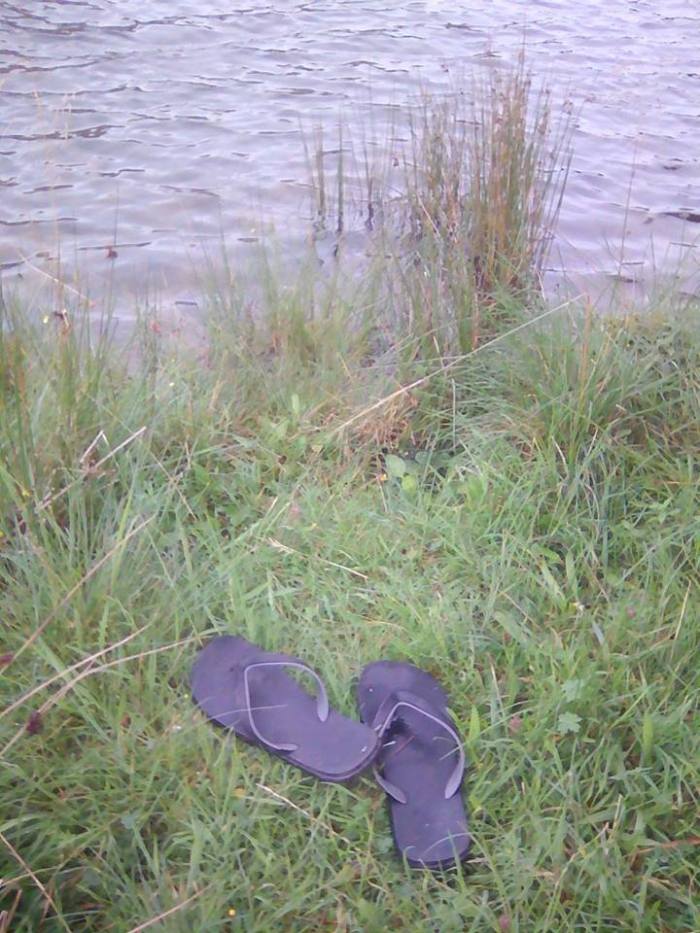