One of the highlights of the Club year is always the January meet which doubles as our Burns supper, where hillwalking (weather permitting) is combined with a hearty and sometimes irreverent tribute to our national bard. A new venue was lined up for this year’s meet on 24th and 25th January. Kinlochleven is ideally situated for the Glencoe hills and the Mamores and doesn’t involve any driving on minor roads which could be an issue at this time of year.

We were originally booked into the West Highland Lodge but were invited by the owners to move to their other, bigger and even more comfortable accommodation, Blackwater Hostel nestled on the West Highland Way close to Kinlochleven’s Ice Factor indoor climbing centre.

The Hostel was exceptionally well equipped and homely, catering for up to 39 guests at a time. 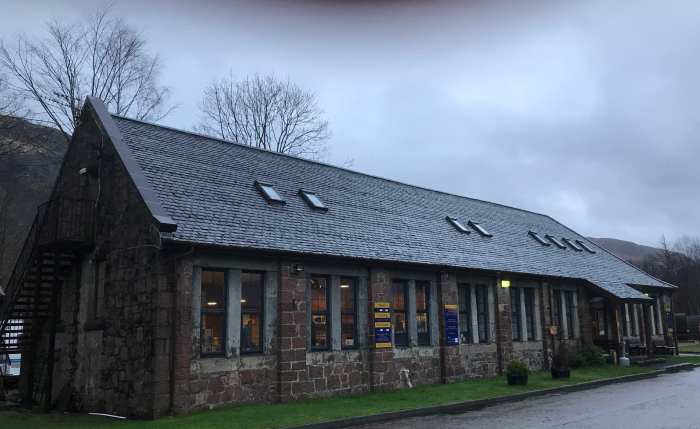 Typically, Friday was on the damp and dreary side. Norrie was first to arrive and set about rearranging the furniture, creating a space for “the band” and trying to ensure a convivial seating arrangement.

George and Susan arrived shortly after having stopped off in Glen Roy to climb one of the glen’s three Carn Deargs. The weather wasn’t great, but Susan got a chance to catwalk in her new jacket. Job completed, their descent gave them the opportunity to view the glen’s “parallel roads” a series of ice-dammed proglacial lake shorelines produced during the cold climate of the Younger Dryas (not to be confused with George when he failed to cross the burn at Steall – the Older Wetas) 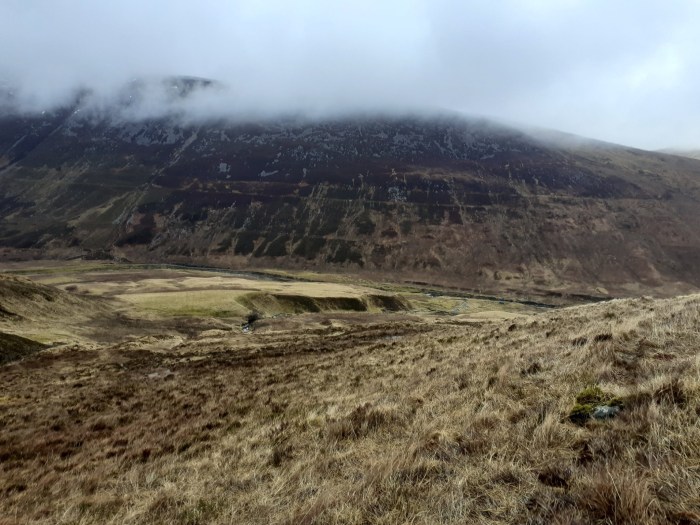 During the evening most of the members and guests arrived. The kitchen was a lonely place as most present elected to make use of the nearby chippy for supper.

Nobody else took the hills on their way up with the exception of Lorn who managed a run up the Pap of Glencoe before slithering down in the dark to the Clachaig to rehydrate before making his way to the hostel.

The instruments were uncased later in the evening and a few songs and tunes echoed round the room by way of warm up for the festivities on Saturday night.

Alan had acquired a ukulele since the last meet, and having learned two chords, he was determined to play both of them before the end of the evening.

As usual on a Friday night, plans were hatched for the following day – versions A through to Z depending on the weather. Whilst not exactly horrendous, the forecast was not what the club’s resident snow leopards were hoping for at the end of January.

For those heading up Munros on Saturday it was a fairly early start. Alyn was the token civvy as he joined the ex-Serviceman’s Club of Bill Dallas, John and Mike as they headed from the village into the spectacular and isolated Mamores outlier Sgurr Eilde Mor. The yomp took them into the spectacular Coire an Lochain before they battled the conditions up the steep ridge to the summit. The pace didn’t slack on the return and they were back at the hostel at a reasonable time in the afternoon.

James and Gerry were also looking to bag a Mamore summit and their target was the shapely double-topped peak of Na Gruagaichean. Translated as The Maidens, it had been many a long year since this pair had maidens in their sights.  Initially they had planned to get dropped off at Mamore Lodge but sadly that road is now gated and locked and eventually they were deposited at the church car park in the village. Initially following the well-tramped route towards Loch Elide Mor they eventually turned north up the broad ridge of the mountain which narrowed as they finally reached the summit in thickening clag and freezing winds. Not much time was spent on top before the descent followed back to Kinlochleven via the Grey Mares waterfall. 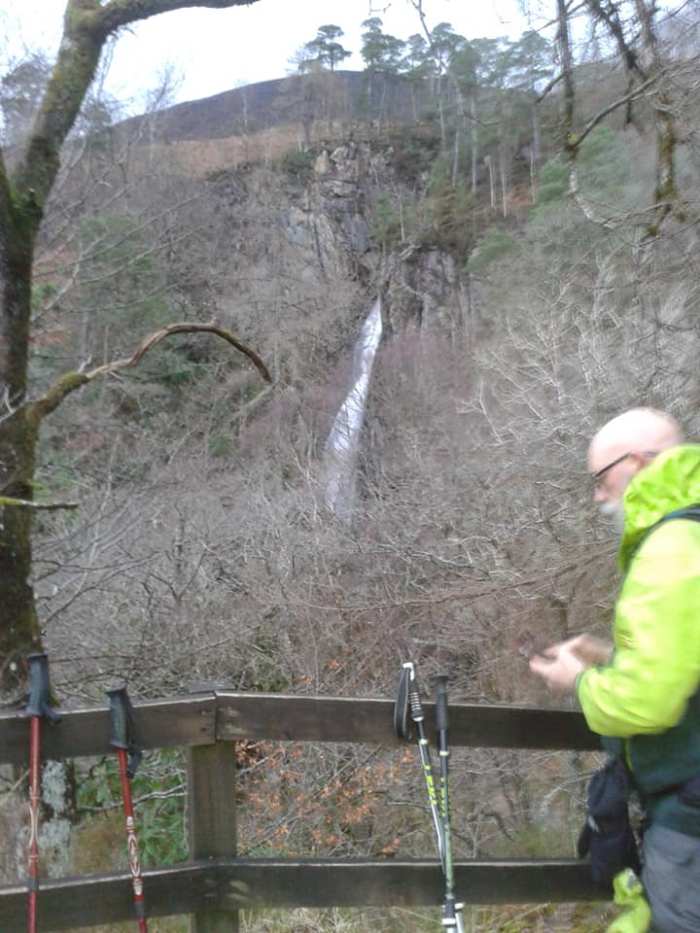 The other Munroists on Saturday were Lorn and Jim Aire. They headed off in the other direction a short distance to Ballachulish and the twin Munros of Beinn a’ Bheithir. They decided to approach from the east – in the dark and the rain – and endured a steep pull up over Sgorr Bhan to their first Munro of the day, Sgorr Dhearg. The rain relented for a time and they enjoyed some peace and some pieces in the bealach before heading up the slope to Munro No. 2, Sgorr Dhonuill. Following a retreat to the bealach they dropped south where a path took them back to Ballachulish and the sanctuary of their car. A decent pace ensured they would have time for a pint in the Clachaig before returning to the Hostel. 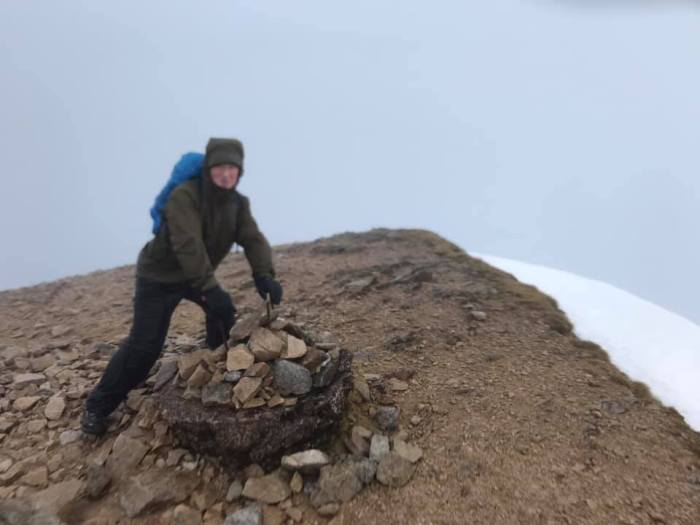 George, Susan and Bill Fairweather had also set off for the same neck of the woods. The neck of the woods was as far as they got though, contenting themselves, after some debate, with a wander through the forests hugging the lower slopes to the north of Beinn a’ Bheither. If George had thought that taking a Mr Fairweather with them was a good omen, he was sadly mistaken. 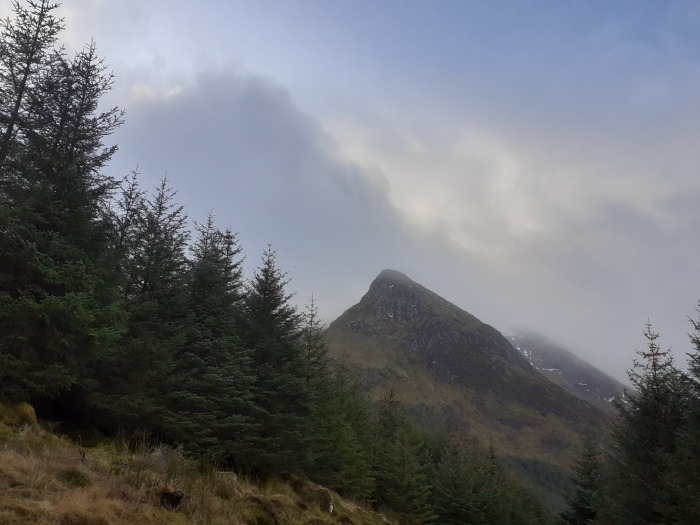 Norrie, Alan and Ian fancied a decent walk but weren’t keen on braving the fierce conditions at Munro height, so they elected to take on the 11 mile hike up to the nearby Blackwater Dam. Setting off directly from the hostel, Dicky Knee, Dicky Ankle and Dicky Dick headed initially up the West Highland Way on a Land Rover track south of the River Leven, continuing on the track as the WHW turned south to Glencoe. The track made the going fairly easy and just before the dam was reached they came across the lonely wee graveyard which was the final resting place of a few of those who died during the dam’s construction (or freezing to death on their way back from the pub).

It is no longer possible to cross the dam (for non-pole-vaulters) so a muddy decent had to made across the outflow before they reached the footpath on the other side. At least there was some shelter at the other side – though only room enough for a “wee yin”.

A pleasant return through the wooded slopes to the north of the Leven saw them make it back to the village in time for a refreshment at the very friendly Tailrace Inn where they found Bill and Mike attending to their own thirst following their return. 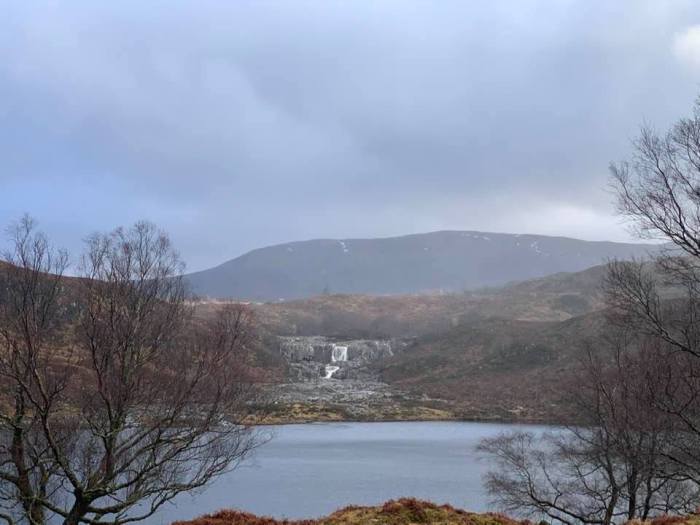 Jim Hughes was determined not to get his boots muddy, so his day involved a 26-mile cycle around Loch Leven and beyond, making sure of course he had time for a coffee stop along the way. 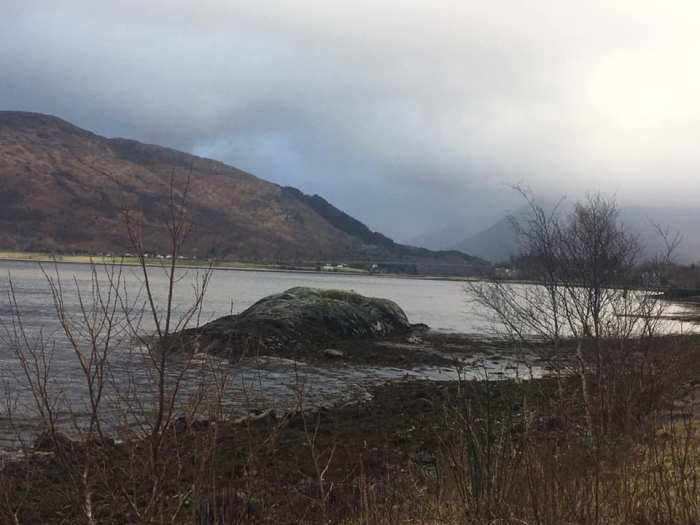 Adrian and Ania were shortly heading off to Norway where they were hoping to get onto some ice-climbing routes. Perfect practice facilities were right next door at the Ice Factor where they enjoyed a fun day which was ideal preparation for their upcoming trip.  Unfortunately, Adrian wore himself out climbing on the “rocks” before it was their turn in the “big freezer” and the ambitious route chosen was unconquered this time round – a valuable lesson was learned though. 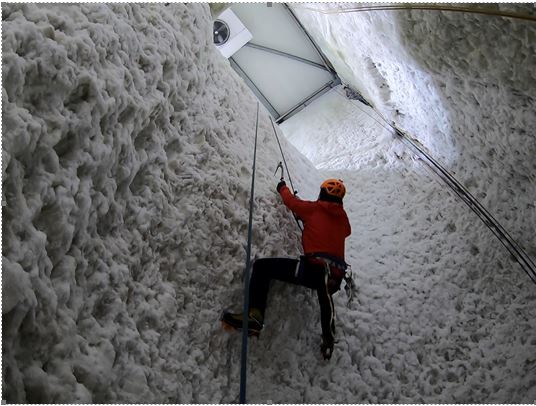 Raymond, Paul and Douglas enjoyed a touristy scoot around the Hospital Lochan before returning to the hut. There were tatties to be peeled and neeps hacked in preparation for the evening’s festivities.

Everyone had made it back to the Hostel (just about) by 5.30 pm in time to get the official business of the weekend out of the way – the club’s Annual General Meeting. After 40 minutes or so the meeting closed (minutes published elsewhere) and everyone could get ready for what was to follow.

The Hostel dining room surely never looked finer with pristine white (at least at the start of the night) tablecloths. Place settings were complete with Raymond once again producing an attractive “order of events” booklet and some attractive 45 Degrees Burns Night coasters finished it all off nicely.

The first course was not long in being dished up to the hungry diners – spicy pepper soup (with optional chorizo) prepared and brought up by Gerry and turkey broth made by Norrie’s wife Debbie. Both were heartily enjoyed.

Tradition also dictates that “great chieftain o’ the puddin’ race” be paraded round the room on its “groaning trencher” and this duty was ably undertaken by Ania before plonking it down in front of the blade-clapping James.

James didn’t so much address the haggis as lecture it, but job done, and the puddin’ toasted with a splendid malt very kindly donated by Garry (and a reserve supplied by James), the fleet of able assistants soon had it all plated up and the diners, horn for horn, they stretched an’ strived until they were all as fu as puggies.

Despite that, Lorn had brought up some sumptuous apple crumble, made by his daughter Casey – and those who had left just enough space were well rewarded.

There followed a brief musical interlude whilst Norrie and Gerry ran through a few obligatory Burns songs on guitar and mandolin – the ukulele player was phoning home at this point.

This was only a warm-up though. The real entertainment was yet to come!

Firstly though, Adrian had an upcoming birthday and Ania had baked him a majestic cake (plus back-up) in Polish style with a layer of jelly on top. Fortunately, there was enough to go round everyone who had room for a piece.

George had composed (with Burns receiving royalties as co-writer) a boisterous and hilarious epic poem “in the style of” Tam O’Shanter. His version was Jock O’Shanter and a rambunctious rhyme unfolded – the hero bearing more than a passing resemblance to club member John “Jock” Calder. The ghoulish and otherworldly characters encountered on his nightmarish journey were thinly disguised versions of the remaining club members. There could only be one “evil hag” though – with Alana Orr hounding the forlorn Jock through the foothills desperate to escape a chilling demise! 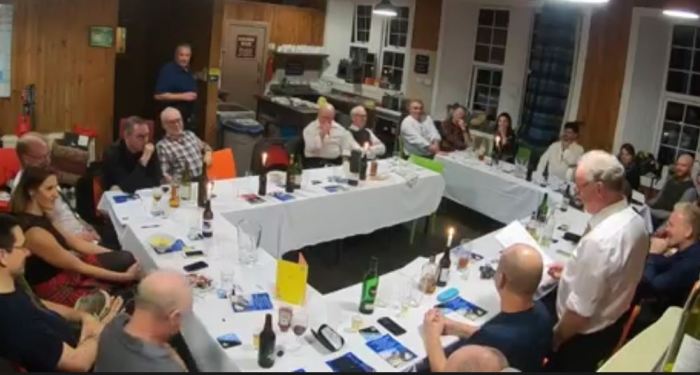 Jim Hughes then took to floor to give a recitation of Burns’ classic poem – To A Mouse and there was no panic in his breastie as he delivered the classic lines in statesmanlike style. 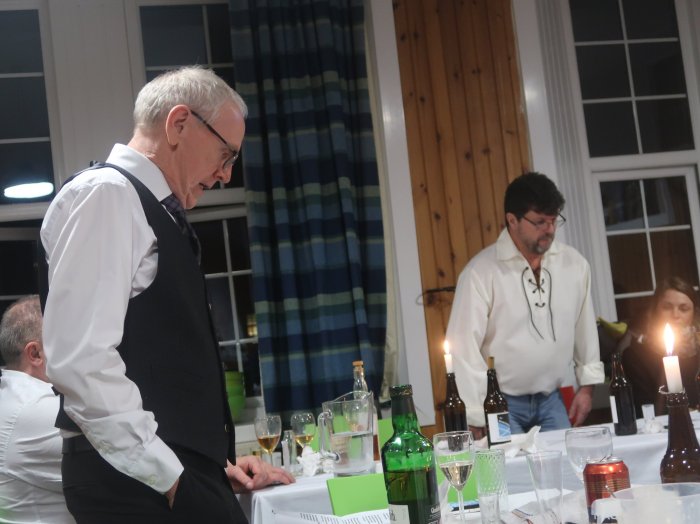 Next up was Norrie with a “Toast to the Lassies”. Drawing from the same deep well George his “toast” took the form of imagined lines Burns might have penned had he had the pleasure of meeting our own Divine Miss O – a poem entitled Lines Written for the Love and Companionship of Miss Alana Orr. Fortunately, the 9.00 pm watershed had just about passed as his rhyme rebounded between the romantic and the ribald – with emphasis on the latter. It was all taken in good spirit though.

There was no “Reply from the Lassies” this time though – although Alan(a) might have muttered a two-word response under his/her breath.

The clean-up operation was soon in flow with John sacrificing his usual hoover for the marigolds.

Singing voices were kept well lubricated by the impressive array of “engine oil” that had earlier been lined up on the window sill.

As usual, casualties fell at regular intervals with only the most battle-hardened surviving through to the early hours.

If the weather hadn’t been great on Saturday, Sunday was ten times worse with rain lashing down ensuring that hangovers wouldn’t be walked off on the hill. The clean-up operation was soon underway though with all the furniture returned to its original position, dishes done and floors swept.

Before that though, the mountain of tatties left over from the night before – christened Sgurr a’ Thadaidh or Spudean Mialach – had to be fried up and eaten. Fortunately, our club had the man for the job.

There have been several classic Burns meets in the club’s short history, and surely this one would claim its place in the annals.