This was our club’s third trip to this hut with several of those attending having visited prior to the 45 being established. It is owned by the J.M.C.S. who keep it well maintained and equipped. A very efficient multi-fuel stove soon heats up the comfortable lounge/ kitchen area and beyond, two w.c. /shower rooms adding to the home comforts and a drying room which was to be put to good use this weekend. 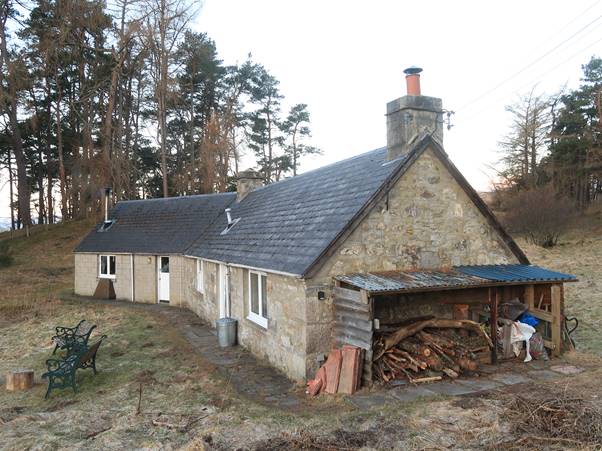 Situated on an elevated position some 8 miles south of Newtonmore it’s within easy access of a multitude of munros and other hills.

With most setting off on their journeys to Balgowan late afternoon no hills were tackled on Friday.

John and Alyn were first on the scene and had the stove fired up for the rest arriving. There was a slight concern over Ania and Adrian not appearing but with no phone signal it was assumed a recent car problem hadn’t been resolved.

The power cut out. John and Alyn having put a few quid in the meter when they arrived so after a whip round more was fed in. This sent the chairman into “eco mode” switching off this and that and nearly causing a major upset stating that there was no need for xmas lights at this time of year. Exterior lights off, heaters on lowest settings, low watt room lighting only, he was in his element ensuring the most was squeezed out of those pound coins.

The usual gourmet meals were cooked and devoured, snacks and nibbles laid out and an unusually quiet night ensued discussing the next day’s routes and the weather forecast that promised it to be very wet and windy. All had retired before midnight, Raymond opting for a comfy armchair as usual.

A 6am start to take advantage of the drier weather predicted before the deluge around noon had most up raring to go. Tina, Duncan and Gerry were first out of the blocks, setting off for Fersit and the munros Stob Coire Sgriodain and Chno Dearg. A 7hr wet trudge ensued with all soaked to the skin. Very few opportunities arose to test photographic skills in the clag and driving rain.

John and Alyn were off next, they chose to go east to Bynack Mor as the forecast said it would be hit by the squalls later in the day and by the jingo did they get it right. Their only setback being that 5 miles out from the hut John realised he had left his lunch in the fridge (again) Alyn was kind enough to return for it, probably because he wasn’t prepared to share his own (again) Not only did this pair get it dry all day apart from the last 5 minutes (the price you pay for leaving sandwiches behind) they had clear conditions all the way out from Glenmore Lodge past Lochan Uaine “green lochan” which has an amazing green hue, folklore says it is caused by fairies washing their clothes in it others think locals tip in Radox bath salts to keep it a tourist attraction. On to Bynack Mor returning via Bynack Beg and the scenic Strath Nethy. 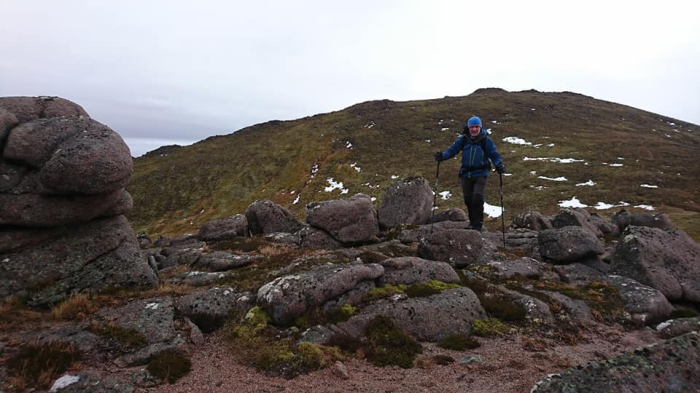 For Lorn, Raymond, Jim and James it was to be Beinn a’ Chaorainn and Beinn Teallach. Last to leave the hut, Jim and Raymond dragging their heels in protest at the chairman’s 6am rise to make for an easy paced day. Parking at Roughburn the chairman was off up the track and waited by the cairn that took them onto the hill path. “That’s not it” was the general consensus, apparently being 1km further on, but after that distance and surveying the waterlogged, timber felled quagmire ahead they had to concede and backtracked to the cairn into the forest where a clear firebreak led up to a style and onto the hill path proper. Fraser’s Way saves the day! On route to the summit a couple who had parked beside us could be seen coming up through the clag so we let them catch up for a blether, one was from Glasgow the other from Aviemore and both were going to call it a day on the south top, a familiar destination for many in this club, but first we persuaded them to continue to the summit then on to the far top and down to the cairn at Tom Mor where they departed down the track. Pressing on into ever increasing wind and rain the totally saturated group summited Beinn Teallach then descended in in near zero visibility, the adventure was not over however, they still had to cross the Allt A’ Chaorain now flowing in full spate. Lorn opted to cross via an islet which split the burn into 3 channels, less wide but faster flowing. Safely over, the chairman followed onto the far bank where he and Lorn watched the other two crossing further downstream hoping but not getting their wish. A further 2km boot squelching trek got the group back to the car park where Jim and Lorn discovered their phones weren’t waterproof. There would be a severe lack of photos for this excursion. 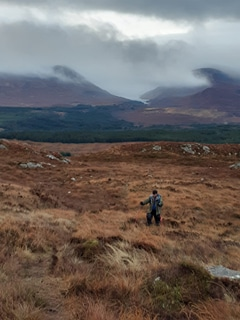 At the hut, John and Alyn had returned and again had the stove and kettle on, much to the delight of those returning with the onset of hypothermia. the group of 4 arriving next and shortly after darkness Duncan, Tina and Gerry. Hot showers and dry clothes bringing all back to the land of the living.

Lorn, Raymond, Jim and Fraz decided to go to the Laggan Hotel for a refreshment while the last group showered but found the place in darkness, change of plan, a little further on to the Monarch Hotel – gate shut in darkness. Welcome to the Highlands. Newtonmore’s Glen Hotel was next an excellent establishment, open and welcoming. Several ales were sampled along with a fine “malt of the month”

Returning to the hut all settled down to an evening of tales, song and music provided by Raymond Gerry and Alyn who had brought along his new guitar and some up to the minute songs. A mega night of sing a long followed. Jim and Raymond soon succumbing to an early lullaby and according to the chairman caused by an inability to pace their day properly.