Inverardren Cottage, Crianlarich – owned by the Ochils Mountaineering Club was the venue for the Club’s January meet. This is another superb hut which has been extended and modernised and sits in a great hillwalking area offering a huge variety of potential outings. Unfortunately, the weather forecast for the weekend was fairly dire and Munro-bagging expeditions for most of the members had been written off. 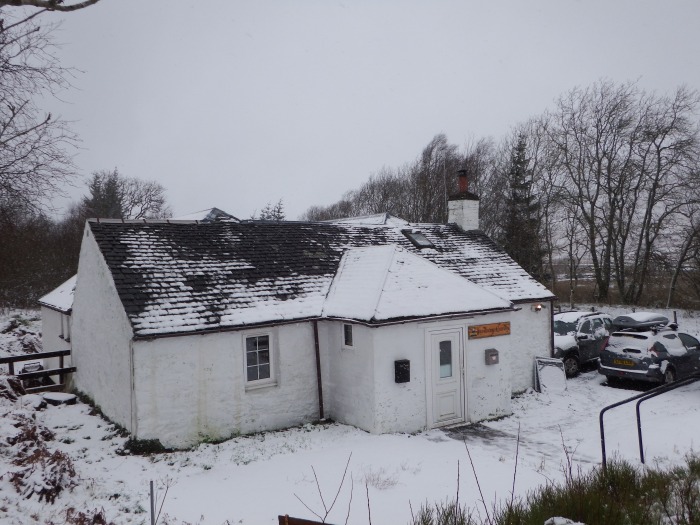 However, the meet coincided with the Club’s annual Burns Supper and our first AGM so spirits were not dampened totally by the weather conditions.

In addition to the members attending, quite a few friends and guests of the club made an appearance over the weekend having made alternative accommodation arrangements nearby.

Most of the members arrived during the course of Friday evening. Norrie and his wife Debbie arrived around mid-day on the Friday to get the keys and make sure the fire was going before the others arrived – after the obligatory lunch in the Ben More Lodge next door.

George and Susan though were determined to get a walk in on the Friday and stopped off at the Corbett, Meall nam Maigheach near Ben Lawers on their way up. A short boggy scamper in blustery conditions saw them attain the summit in quick time and they were rewarded with extensive views.

As the numbers swelled during the evening, so did the bellies as suppers and liquid refreshment were downed in generous quantity prior to a succession of guitars being alternately caressed, stroked and finally battered into submission by Logan, Norrie, Raymond and guests, “Cowboy” Cowan and Dougie Smith. As the whisky supply reduced, the volume increased before finally the parties drifted off to their beds.

Nobody was too keen to rise early on Saturday morning, with the weather forecast having been proved accurate as a covering of snow layered the ground and a cold blustery wind swirled around the cottage.

Nevertheless, the Frasers, James, Logan and Blair and another group comprising Jim Aire, Ian Pollock, Neil and Alan decided to attempt the ascent of Ben More.

Clan Fraser set off first but before very long met conditions that determined the only sensible course of action was to retreat and leave the Ben More summit for another day.

They encountered team Aire on their descent and convinced them too that they should not try and continue up to summit ridge. Having got matters off to a poor start by starting their ascent up the “wrong hill” (wooden compass presented to Jim later in the evening), Jim made sure he was 2/3rds the way to a treble by stepping knee deep into a burn and assuring yet again that the blue flipper would return to Bo’ness. 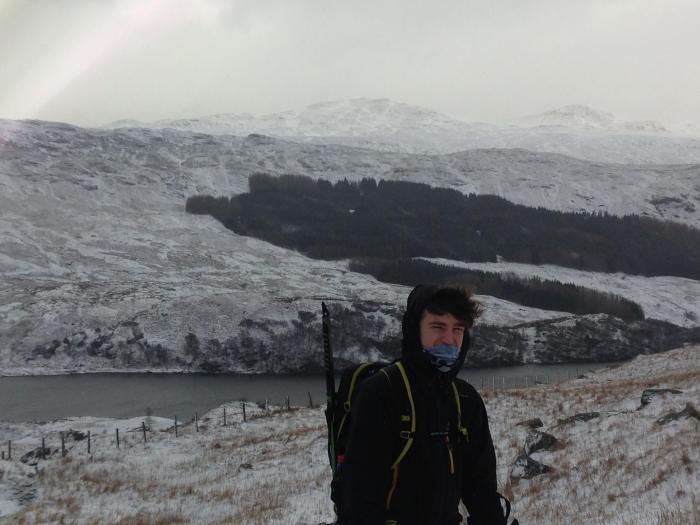 In need of a leg stretcher, George, Susan, Dougie and Norrie decided to hike down the West Highland Way as far as the Drovers Inn at Inverarnan where Norrie’s wife had arranged to pick them up a few hours later. Conditions were hostile enough on that low level walk and there were concerned glances up towards the high tops and conjecture as to how their colleagues were faring. 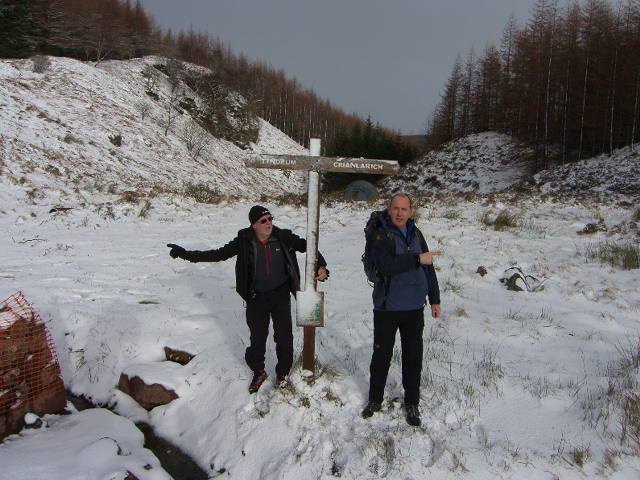 With one notable exception, the rest of the assembled crew decided to have a “social” day in Crianlarich instead. A jar or two was taken in the Ben More and an impromptu jam session passed the early afternoon nicely.

Bill Dallas, a friend of Ally and Rowena’s decided that he needed another “quality winter day “and set off to ascend Cruach Ardrain. Conditions were horrendous but Bill battled on, finally crawling across the summit plateau to the cairn – a fantastic achievement. Bill and his wife Debbie have subsequently joined the club and will no doubt encourage the rest of the membership to “get out there and get on with it” at future meets. 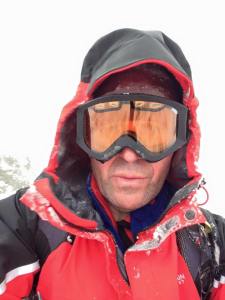 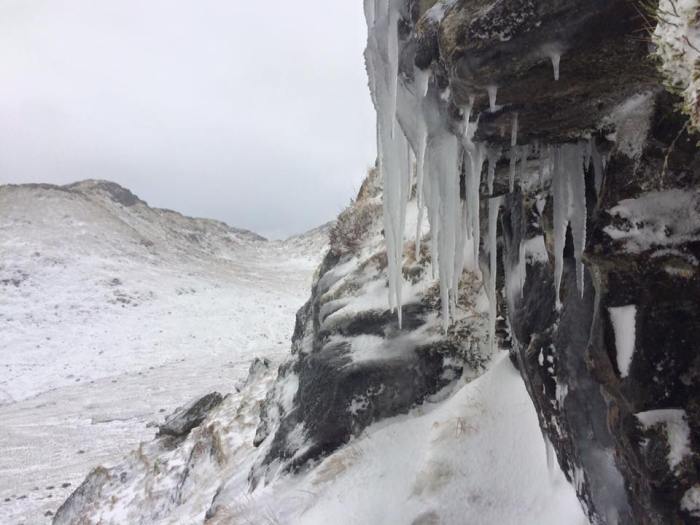 With the Burns supper on the horizon, an organised team set about the tattie peeling and neep chopping in preparation for the feast to come. Norrie had brought up two large pans of soup prepared earlier by his wife Debbie and Raymond busied himself concocting the Cranachan dessert. 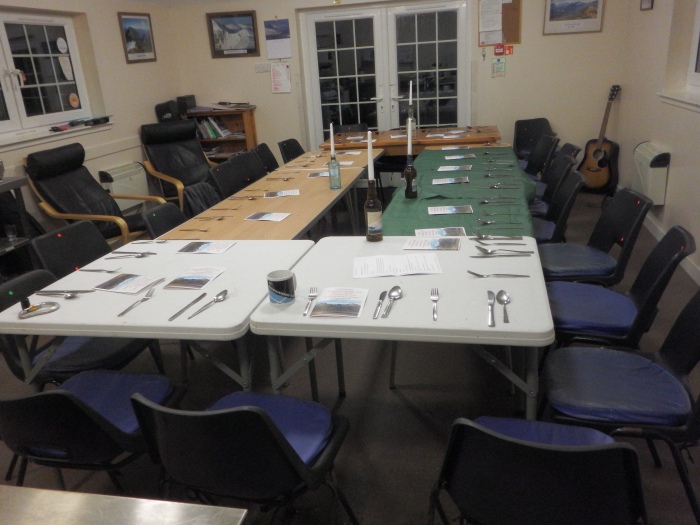 At 5.30 pm all the members were rounded up into the sitting room to run through the Club’s first AGM. There was nothing too controversial to be discussed and the business was concluded 20 minutes later. Link to minutes:

Aperitifs were taken as the haggis hadn’t been put in the oven in time but before too long the assembled throng were sat round the table, having supped their soup and were eagerly awaiting the entrance of the “great chieftain o’ the puddin’ race”.

Pipe Major I. Pod finally burst into life and Logan jinked round the table with the haggis sitting proudly on its platter. A resplendently dressed James then provided an enthusiastic and entertaining address to the haggis, even managing to locate the centre of the pudding with his knife minus any unnecessary detours. 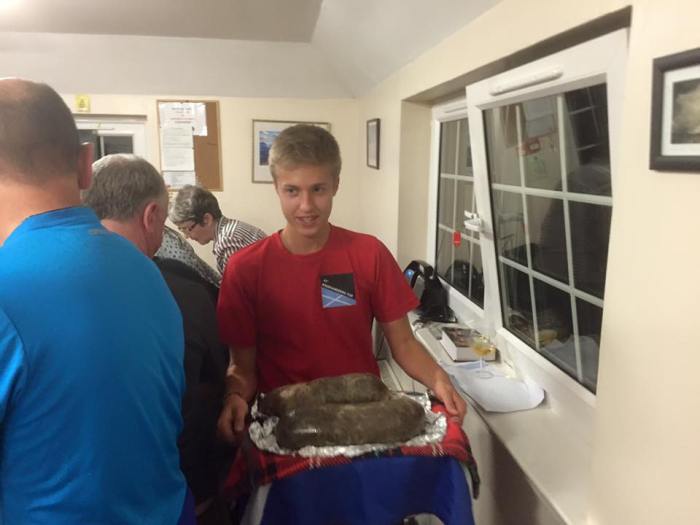 The haggis was then left to sit as Dougie Smith, who had shortly to leave for another appointment, recited a truly mesmeric and exciting recital of Burns’ epic Tom O’Shanter. The applause ringing around the room at the end was hugely deserved. The bar had been set at a very high level for subsequent performers.

Cowboy and Norrie ran through a few favourite Burns’ songs before Raymond entertained the group with an ode in Burns style titled “The Conquest of Buachaille Etive”, even going blindfold for the last 200 metres!

More music followed before Ian Pollock treated the room to a relaxed and gracious “Toast tae the Lassies”.

The “Reply fae the Lassies” from Rowena proved to be another highlight of the evening. She had been consulting the rhyming dictionary and had come up with a poem in response that was truly delightful and humorous. There were references to lost trousers, lost hillwalkers and lost Cuillin summits as the male members of the club were, each in turn subject to some gentle ribbing – but delivered in an affectionate (we think!) way.

More music followed and as the mood grew ever more spirited, George delivered some ribald odes in Burns’ style to much amusement.

Cowboy, Logan and Norrie continued to run through the “45 Degrees song-book” for several hours, with some inventive accompaniment from Alan and others. Conversation and libation flowed throughout the evening and a few of the ladies entertained us with some enthusiastic and highly original dance moves. 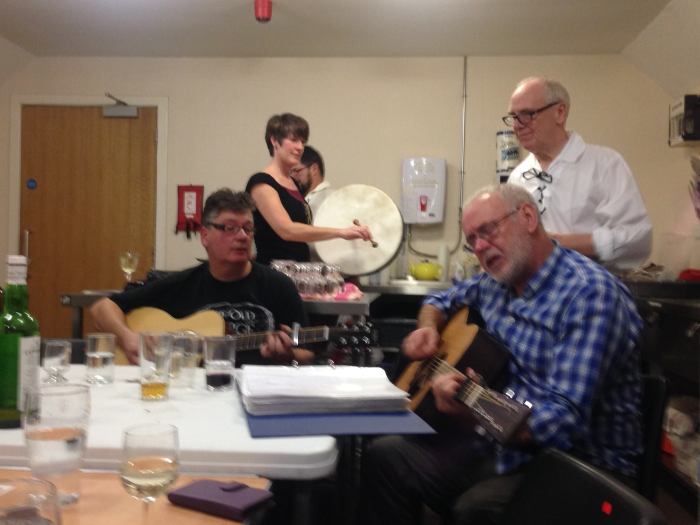 It had all proved too much for Raymond, who initially unnoticed had slid off to bed well before midnight – thus denying Jim Aire the coveted treble and earning himself the ignominy of the McGrandles Cup. In fairness though Lazarus Evenden returned to the fray after his 90 minute “power nap” just as Jim, with the pressure now off him drifted into dreamland.

As stamina ebbed during the wee hours, members of the group wandered off to slumber whilst the resolute few carried on long into the approaching dawn.

Despite the scarcity of hillwalking exploits, the weekend was a huge success and confirmed that the social bonds formed during the preceding 12 months continued to grow and look set to continue in the months and years to come.