The Ladies Scottish Climbing Hut at Kincraig, near Aviemore is a favourite venue for the Club, its first ever official meet taking place there in February 2015. On 26th/27th April 2019 we revisited for a second time. The Glen Feshie Munros and the Eastern Cairngorms are a short drive away.

Once again, the spiteful weather gods had it in for the club and Friday’s conditions, whilst not exactly horrendous didn’t encourage many members to take in a walk on their way north. Not for the first time, the exceptions were George and Susan who took the opportunity to tramp up the boggy open slopes of Meall na h-Aisre, a Corbett on the western edge of the Monadhliath with a trig point confirming their summit ascent, As a warm-down before heading up to the hut, they took a scamper up the Pictish hill fort of Dun da Lamh, near Laggan. An interesting site in its own right, it offered nice views back the Corbett and the Munro of Geal Charn. 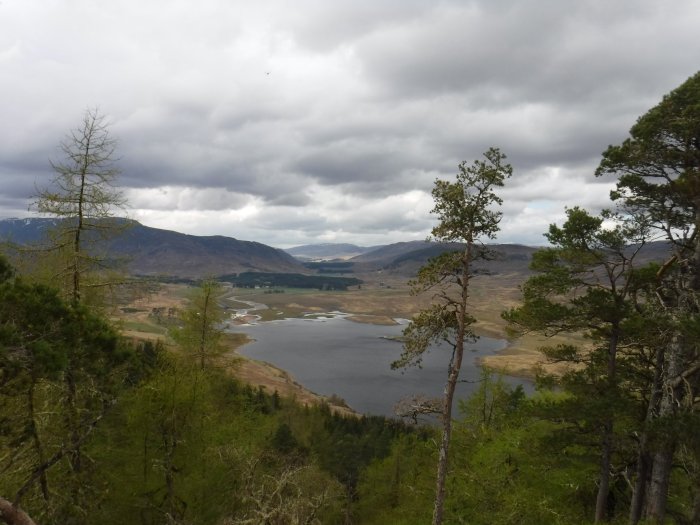 Despite their exertions they were first to arrive at the hut and the fire was glowing before firstly, Norrie and then gradually everyone else made their entrance during the course of the evening.

The usual chatter and banter ensued followed by a few songs with James wetting his whistle with one of the last-remaining bottles of the highly rated 45 Degrees brew.

The weather on Saturday was hardly enticing but Jim and James were not discouraged in the slightest as they headed off for a mega-hike into the western Cairngorms. Their route from Glen Feshie took them up the excellent path from Auchlean over the high plateau over the reclusive top of Tom Dubh to the Munros of Monadh Mor and Beinn Bhrotain. Their tramp back took them close to the Munro summit of Mullach Clach a Bhlair, a Munro on Jim’s repeat list but inexplicably left for another day. Jim reported a 25k hike, whilst James recorded 30k – with various theories regarding how James managed to walk an extra 5k. 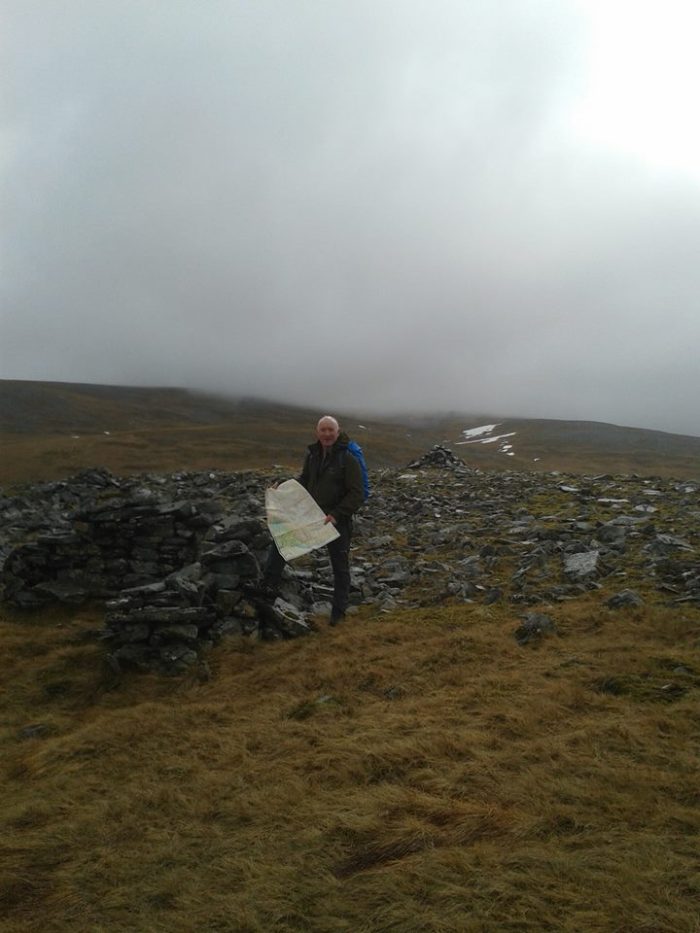 With low cloud and murk forecast to plague the Cairngorms, John, Adrian, Ania and Alyn headed a bit further west to Creag Meagaidh in search of more favourable conditions. They climbed Beinn a’ Chaorainn’s superb east ridge up onto the hill’s main summit. From the Bealach a’ Bharnish a long steady pull east up onto a misty Creag Meagaidh followed. Here they consulted the map, held a council of war, and decided to re-ascend Beinn a’ Chaorainn before continuing west onto the day’s third Munro, Beinn Teallach. As they descended Meagaidh, the spits and spots of rain stopped, the cloud lifted, rewarding them with fantastic views. A superb hill day was enjoyed including  a cracking mountain scramble, 30k of walking (agreed by all four!), with over 1700m of ascent….. plus three new Munro ticks for some. There were four huge sighs of relief when they arrived back at Alyn’s car. 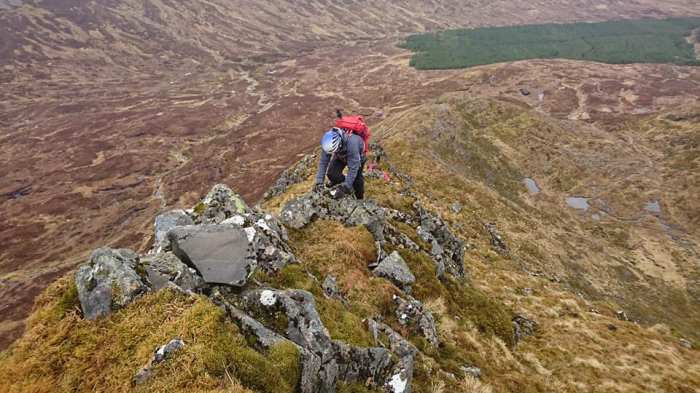 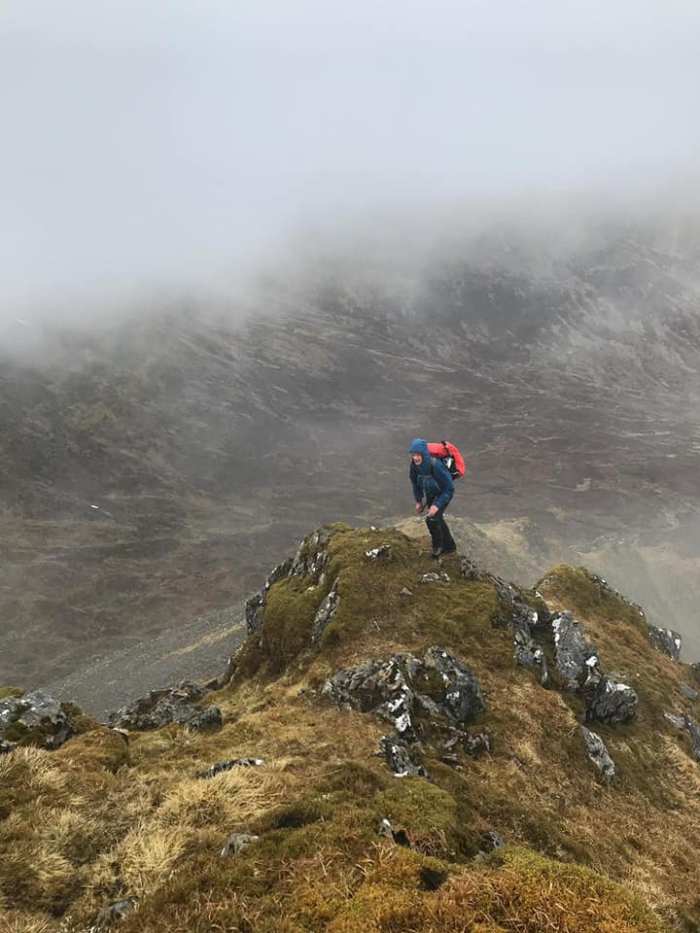 Not be outdone by these marathon hikes, Bill the intrepid Himalayan adventurer took a stroll along to a nearby bothy! In his defence he was carrying an injury and accompanied by Deb and their two pointers who spent the night in their van to get some peace. It was an enjoyable walk along the banks of the River Feshie to the recently refurbished Ruigh Aiteachain bothy. This hut is real 5-star bothy accommodation with considerable expense involved in bringing the bothy (with outside toilet) up to its current standard. With Deb helping Bill back along the path they were soon back in the hut resting up. 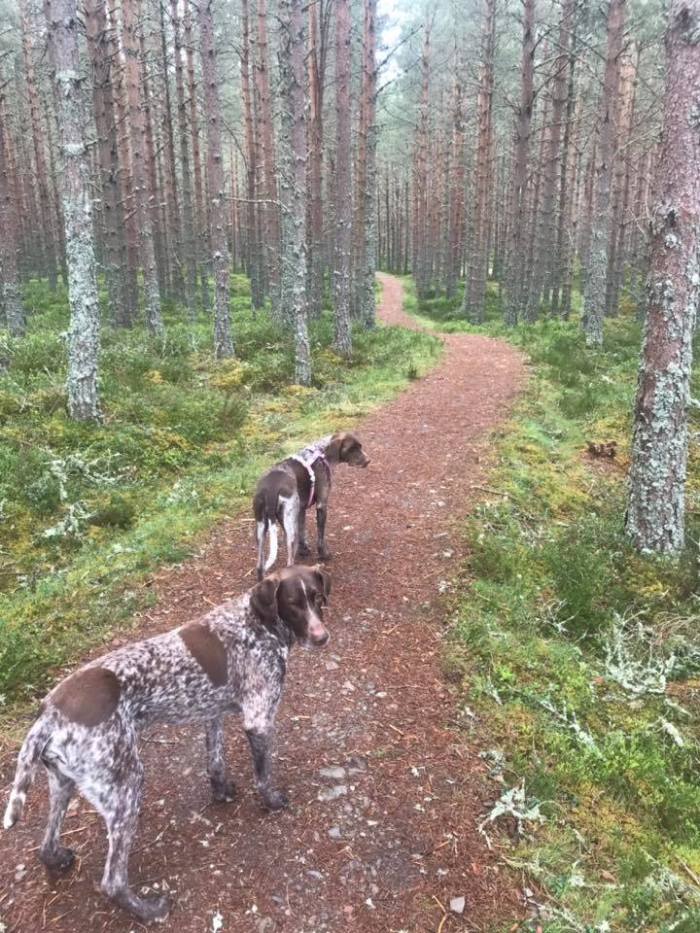 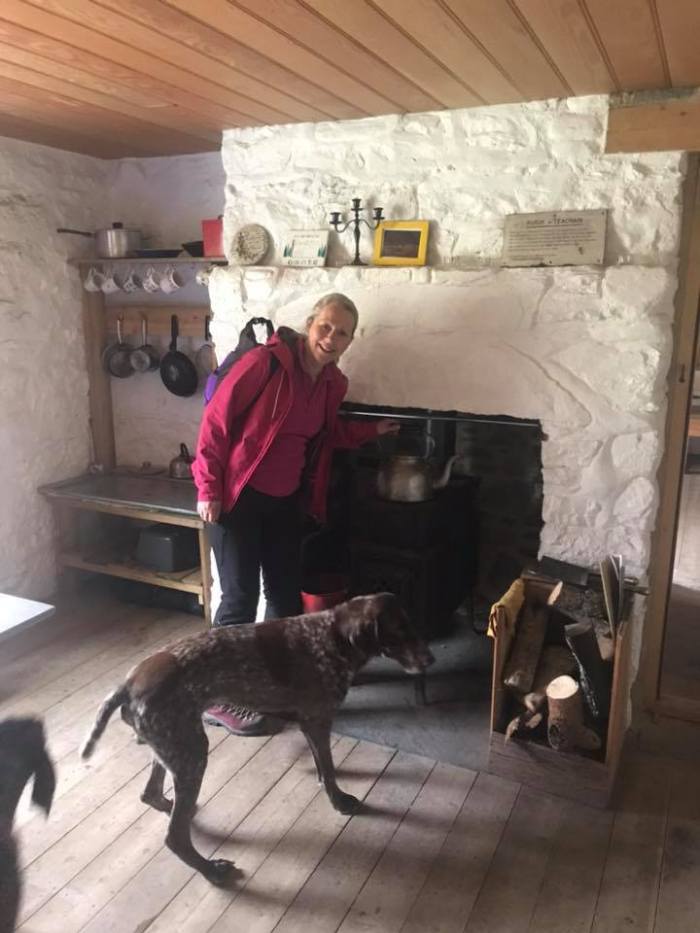 George and Susan had targeted the rarely visited, rarely photographed and rarely blogged Leth Chreag – a demoted Top of Monadh Mor sitting atop crags to the east of the River Eidart which cuts through this section of the Cairngorms. They completed their ascent with no problems but chose not to diminish its mystique by adding to the library of photographs of the summit.

Norrie’s plan A had been to head up to Glen Strathfarrar and complete the three Munros he still had to repeat in that area. Daunted by the weather though he decided to head further west where the forecast was better, to tackle Cona Mheall in the Beinn Dearg (Ullapool) range – the only peak he had yet to repeat in that area. Although not exactly on the doorstep the trip would be a couple of hours quicker than if he did it from home. His effort in driving that distance and the long walk up Gleann na Sgaib was rewarded though. The clag was in and out at Munro summit level but there were plenty breaks allowing him to enjoy the spectacular views north west out over Loch Broom to the Summer Isles and east down to lonely Loch Prille nestling in the heart of the rugged wilderness. 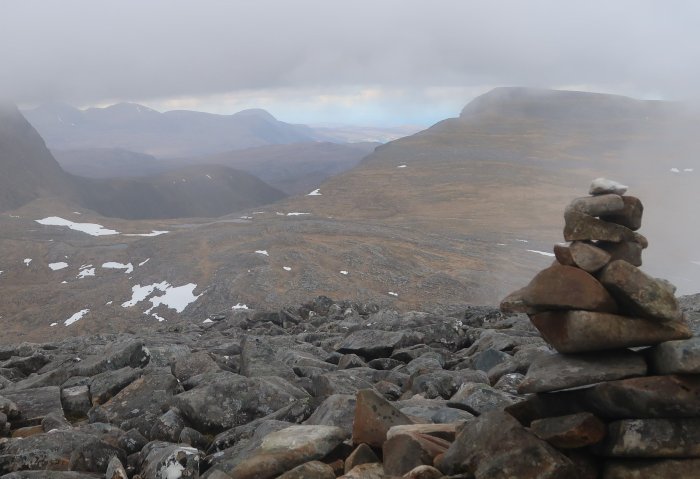 Once again a fine evening was enjoyed in the cosy hut with food, drinks, banter and song. Despite their efforts on the day, John and Alyn had enough in reserve to do a turn each on moothie and guitar respectively.

With most people heading home on Sunday morning, George and Susan decided to extend their weekend by heading back towards Laggan climbing up over the craggy Creag Ruadh to the monument that sits atop Creag Bhuidhe. This monument, erected to commemorate Ewen Macpherson, the 20th Chieftain of the Macphersons, is very visible from the road. Having driven passed it countless times on trips north west their decision to finally pay it a visit was rewarded by fine views over the River Spey and beyond, 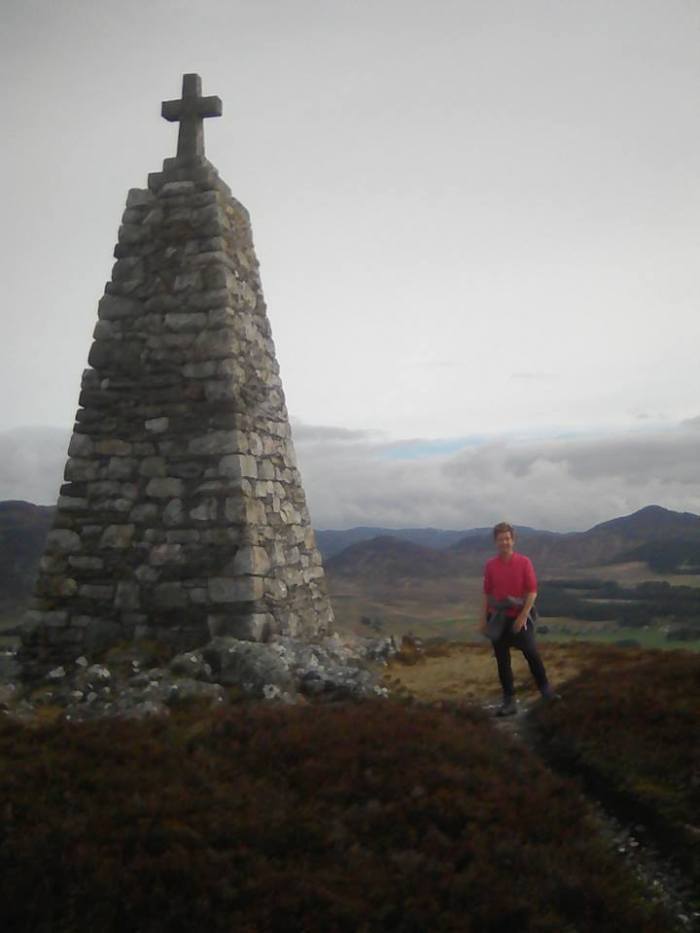 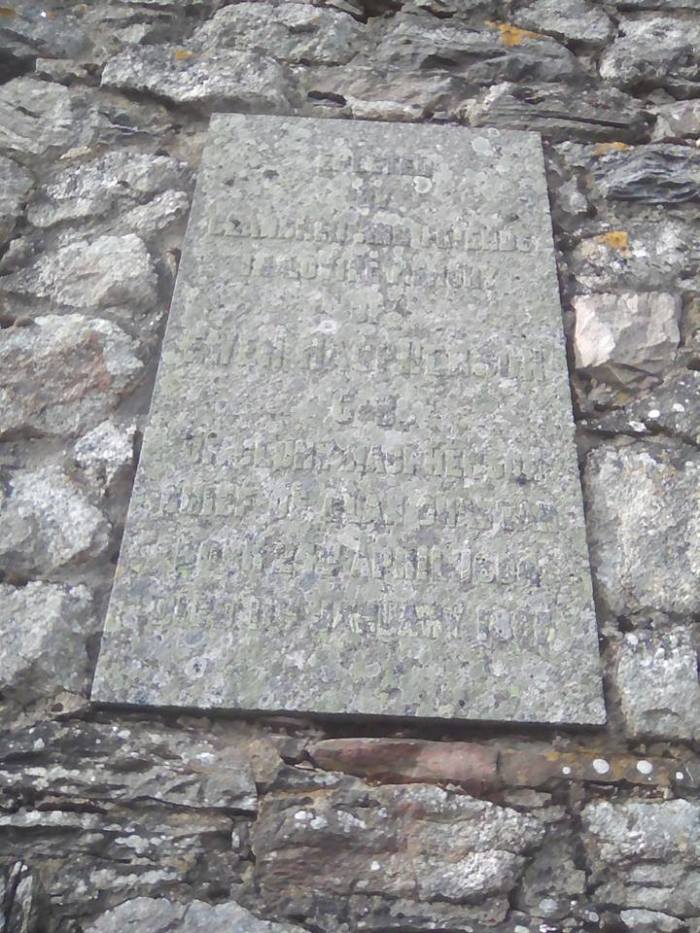 Also, on their way home, John and Alyn stopped off at the Benny Beg sport climbing crags near Crieff where John took the opportunity to break in his new rock shoes as he and Alyn tackled a couple of nice routes.