The former crofting cottage of Lagangarbh has a truly majestic location, nestled below the iconic and imposing buttresses of Buachaille Etive Mor. This SMC hut was the venue for the Club’s meet in April 2016 and our eagerness to return resulted in a revisit on 8th and 9th of December 2017. 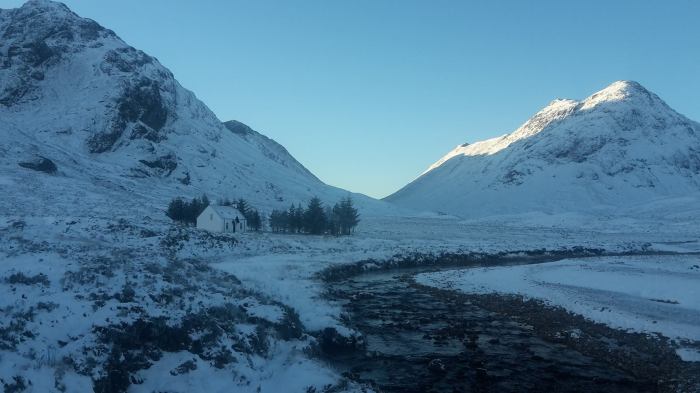 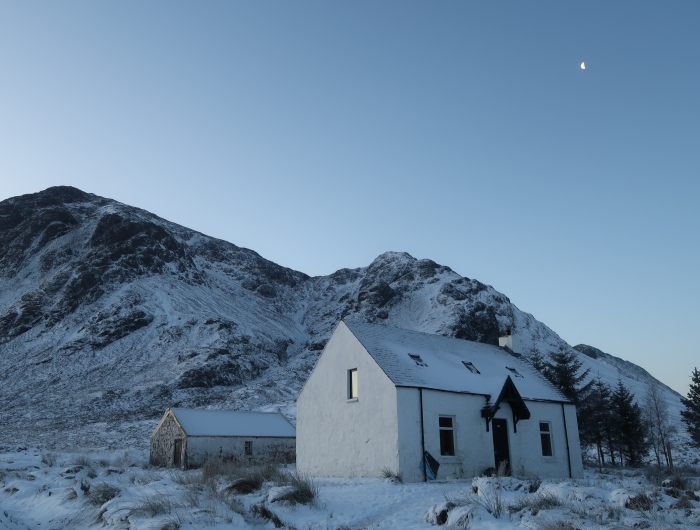 A few regulars were unable to attend for a variety of reasons, but eight members made the trip. Our friends Caroline and Javier visiting Scotland from their base in the Pyrenees also joined us again.

2017 had not been particularly kind to us in relation to the weather and once again the forecast was none too promising as bags were being packed on the Friday.

Norrie and Gerry had arranged to meet up in Glen Ogle at mid-day so that they could take advantage of a leg-stretcher before heading up to the hut. As the weather didn’t encourage them to get up high they contented themselves with a southerly stroll along the waymarked trail which at one time carried the railway north from Lochearnhead. The walk more than fulfilled it’s purpose offering fine views over to Loch Earn and presenting numerous festive-like icicle sculptures. 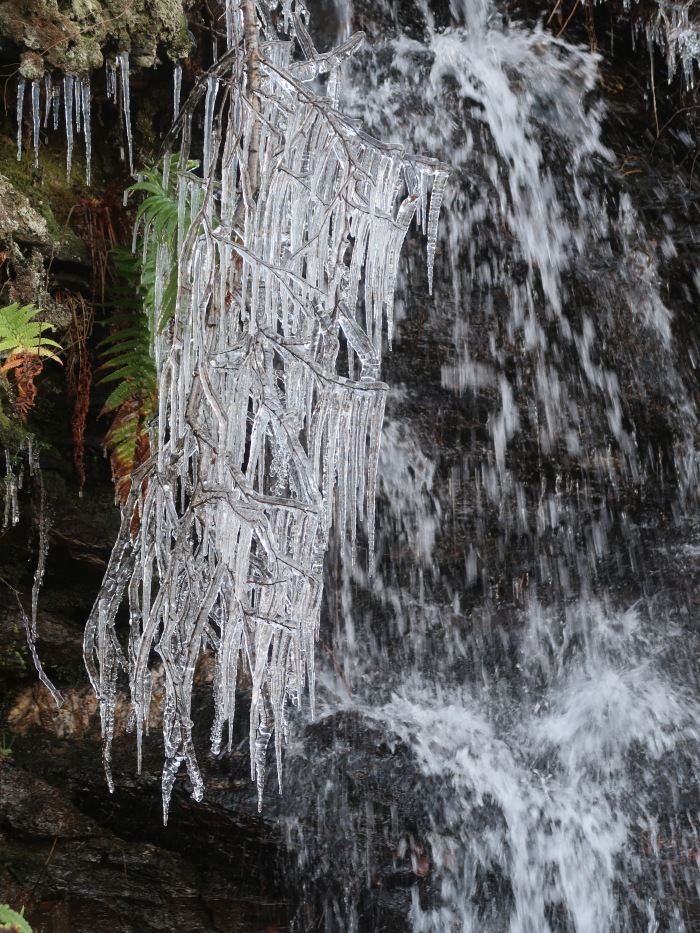 On their return to the car, they picked up the hut keys which Raymond had left for them on his way north. His leg-stretcher was in a slightly different league as he went for a run around Tyndrum, partly along the route of the West Highland Way.

Arriving at Lagangarbh just before darkness, the wise decision was taken to park the cars in the lay-by adjoining the main road, the snow and ice preventing the drive down the rough track closer to the hut. Norrie and Gerry closely followed by Raymond made several trips back and forth with the gear and after putting their heads together, finally managed to get the heating on to get the hut warmed up.

During the evening everyone else arrived and made the head-torch assisted traipse down to the hut. Paul clearly didn’t have his head-torch on when he got dressed (presumably in the dark) that morning. A few mince pies added a festive flavour to the evening which evolved, as usual with a few drinks and a few songs to while the night away. 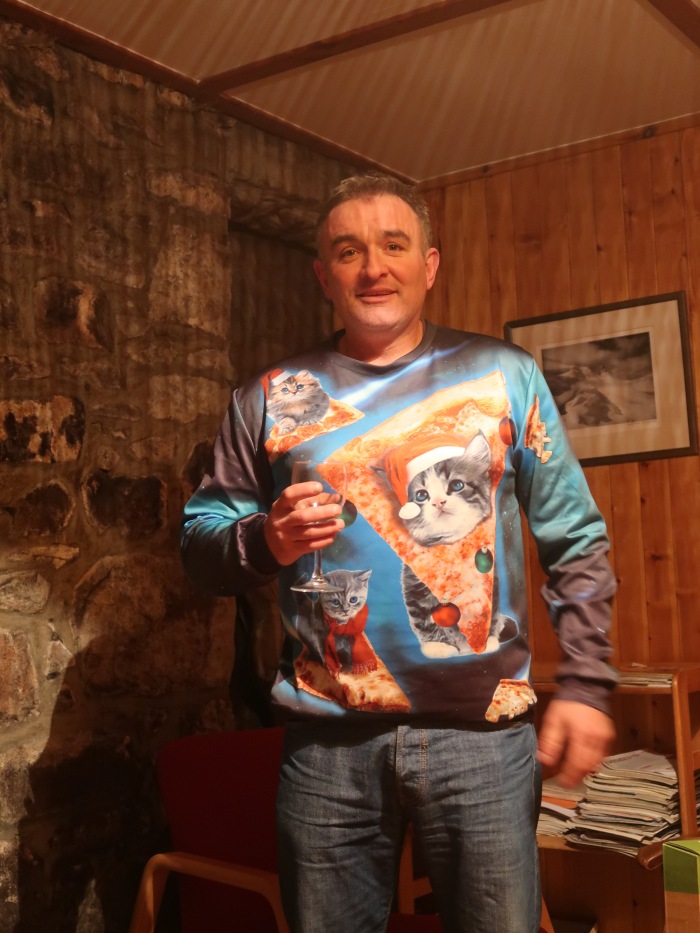 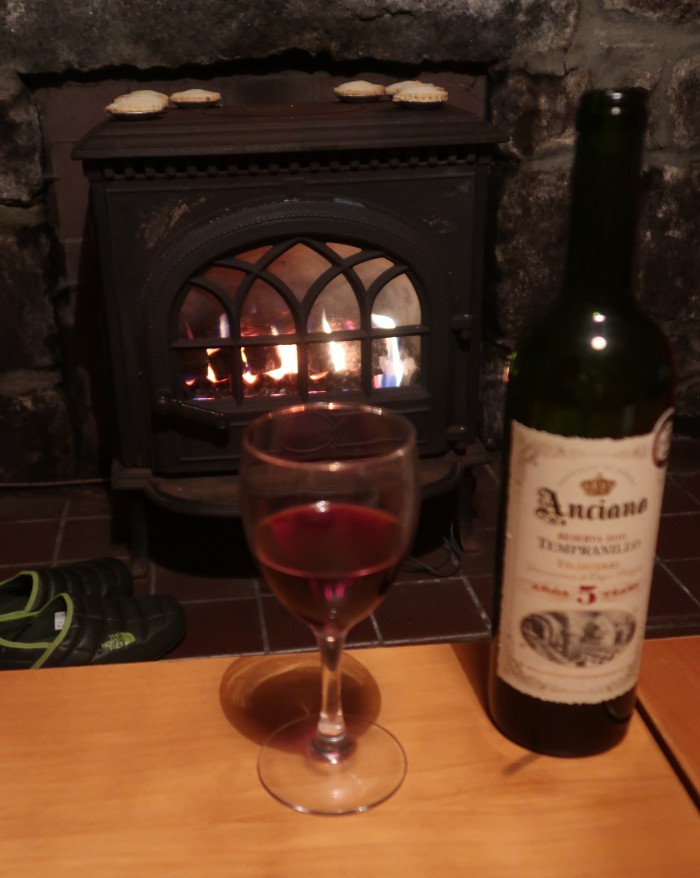 With the shortest day less than a couple of weeks away, nobody had any overly ambitious plans for the Saturday. A decision was taken late in evening to go for a team assault on Stob Dearg, the higher munro on Buachaille Etive Mor, the route being literally on the doorstep.

As Saturday dawned, a collective sigh of relief echoed round the hut – the weather forecast proved to be hopelessly inaccurate as a glorious sunrise greeted the intrepid mountaineers. At 9.00 am the group headed south into Coire na Tulaich crossing the burn to west side before stomping up the snow-covered path towards the imposing central scree chute which was covered in snow and ice. 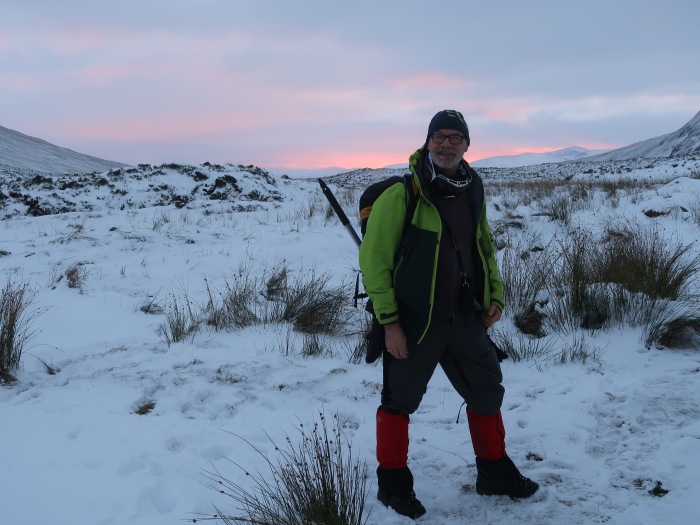 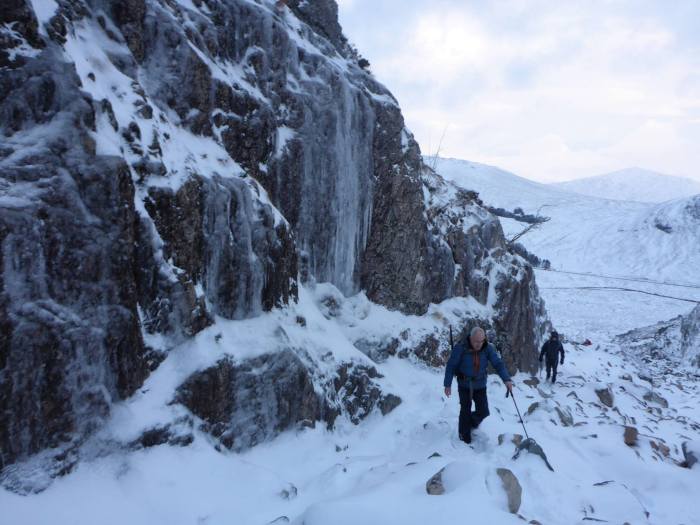 The trade path veers right avoiding the chute, although it could not really be followed as thickening snow covered the route as height was gained. Jim, Norrie, Caroline and Javier took what they believed to be line of the path well to the west of the gully. The rest of team fancied tackling the ice-covered chute head-on and marched directly up to the notch on the ridge. Paul eventually thought better of joining the chute-clamberers and he too veered right to take the “conventional route”.

When Jim et al popped up onto the ridge it became clear that the route up the chute wasn’t entirely a piece of cake as they waited for Team B to make an appearance. James had somehow managed to wriggle his way up but the others were sensibly donning crampons to ease the ascent up the final steep few yards. There were several puffs of relief as one by one they emerged from the icy trough and encountered the firm terrain of the main ridge. 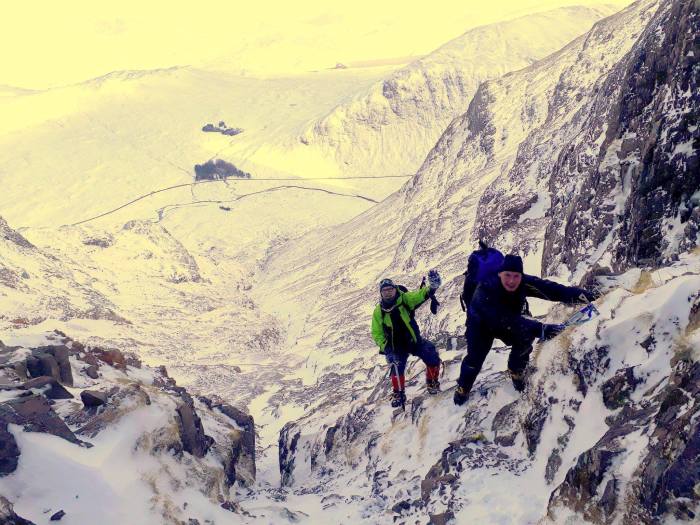 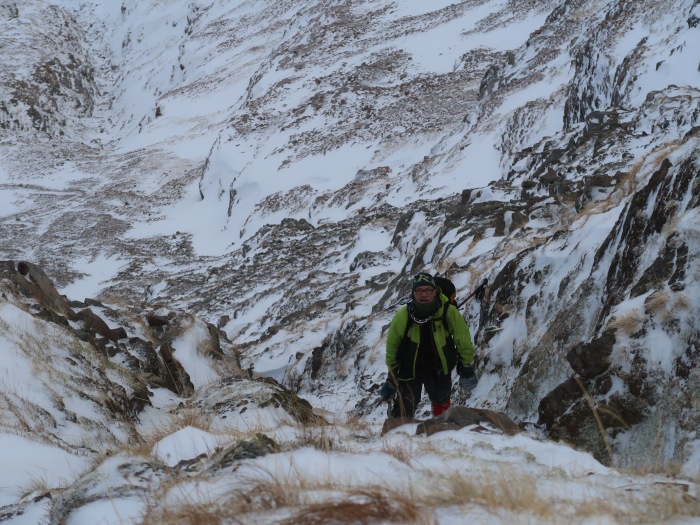 Unfortunately, Paul’s recurrent back problem was still causing him a lot of pain and having acquired some mega-ibuprofen from Norrie decided to retreat back to hut without visiting the summit. 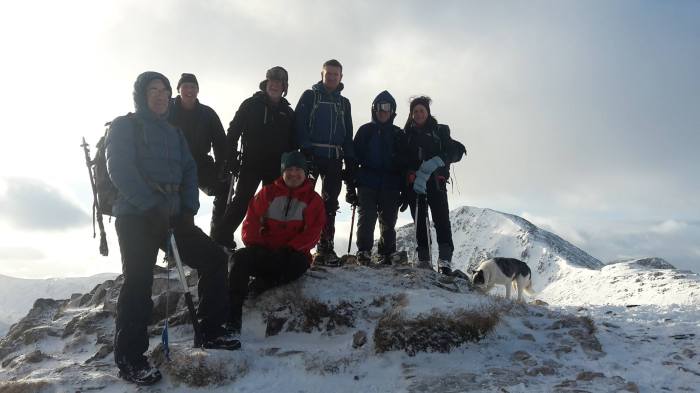 The others ploughed on up the broad boulder-strewn ridge which narrows just before the summit cairn. There are few better viewpoints in Scotland with magnificent vistas in all directions – a jumble of peaks to North, East and South and the bleak expanse of Rannoch Moor to the West with Schiehallion’s conical shape visible in the far distance. 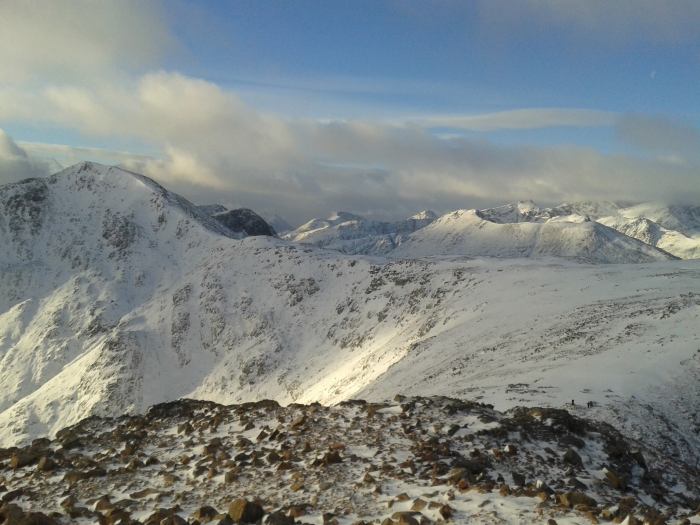 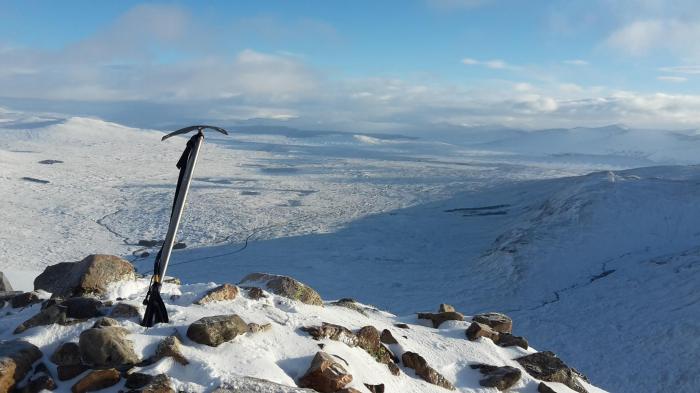 A bit of time was spent drinking in the magnificent 360-degree splendour before the group headed back west down the ridge. Raymond, Lorn and Neil decided they would continue the full length of the ridge as far as the lower Munro summit of Stob na Broige several kilometres south west. They were soon joined by Caroline and her faithful hound, Lobo who raced after them to catch up. James, Norrie, Gerry and Jim agreed to assist the cramponless Javier back down the frozen slopes. Javier was also suffering from sore knees but all five carefully and safely made their descent – not really requiring the helpful directions left earlier on the snow-covered rocks by Paul.

The remaining four continued to enjoy the afternoon sunshine as they marched along the undulating ridge to the distant summit, considerably lower than the “top” of Stob na Doire that they traversed on the way. The Munro summit duly bagged, they retreated back along the ridge before dropping off north west into Lairig Gartain where a fine well-constructed path leads back to the main road. With darkness settling around them a short cut was taken over the heathery moor directly to the hut and a welcome cup of tea.

A few SMC members appeared during the course of the evening but they were content to discuss their business in the kitchen and leave the “main lounge” to our club. Once gain the guitars, mandolin and bodhran were wrested from their cases and another fine evening of wine, whisky and song ensued. There was an eerie moment later in the evening though when the ghost of W H Murray made a reappearance. 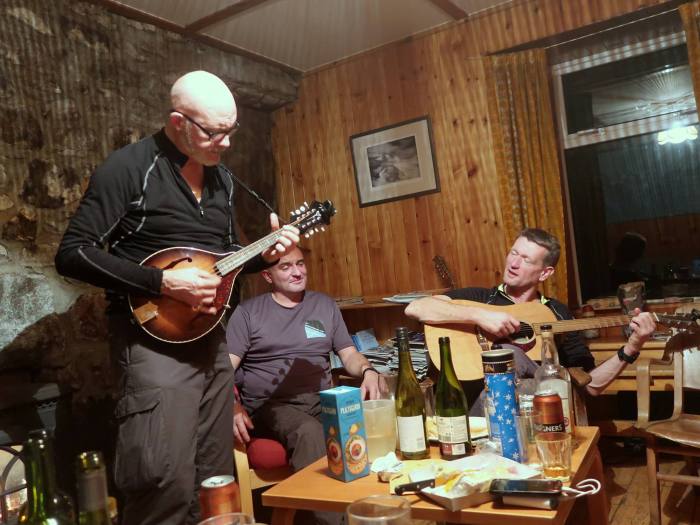 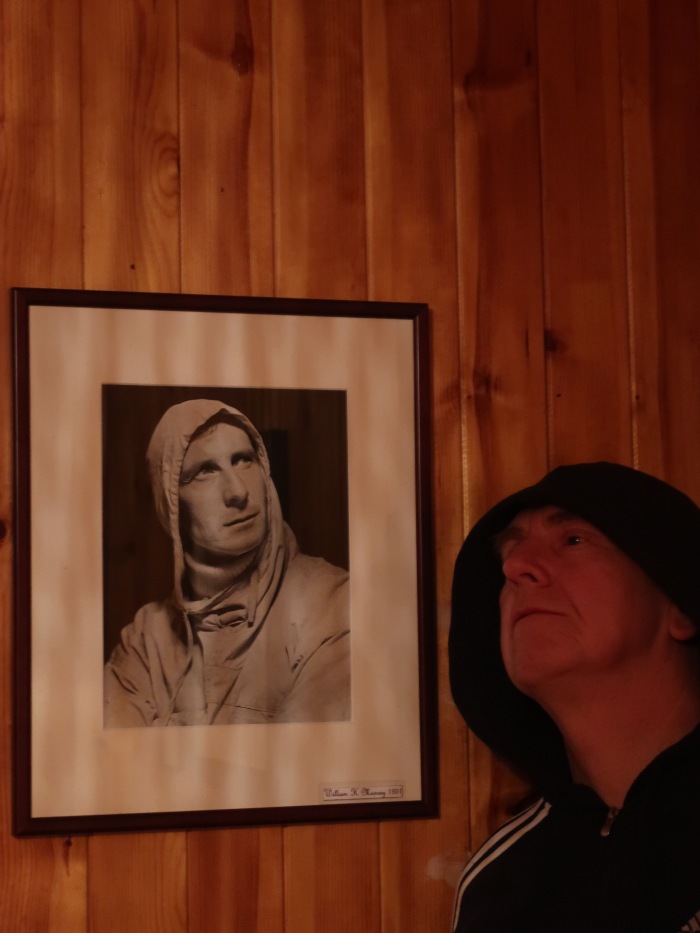 As the group packed up on Sunday morning, a string of hikers and climbers were already setting off for their Sunday fun on the Buachaille. The day was even colder and sunnier than the previous day – absolutely magnificent conditions for a day’s winter walking.

Caroline and Javier decided they would have a “warm-down” walk on their way home and borrowing Norrie’s map opted for the Glen Ogle walk he had done with Gerry on Friday.

Raymond was looking for something a bit more energetic and picked out the fine little peak of Ben Inverveigh sitting above the Glen Orchy forests. 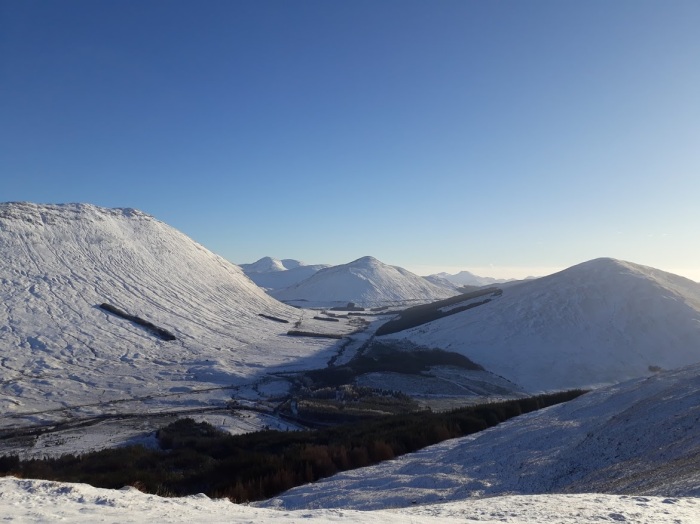 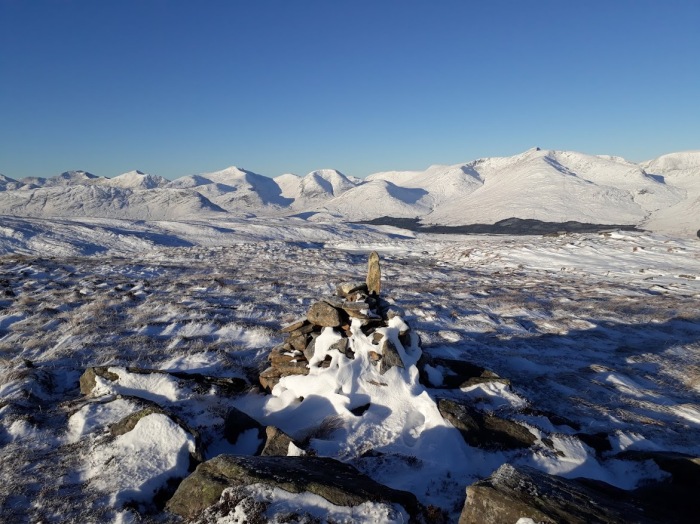 For the rest, a cooked breakfast in Tyndrum beckoned followed by a glorious drive down the A82. Most of us have travelled this road dozens of times but have probably never seen the views looking quite so spectacular. With clear blue skies and thick cold air hugging the lower ground and lochans it truly was a photographer’s dream with plenty “professionals” in evidence with their massive tripods and lenses looking for the perfect “calendar shot”. 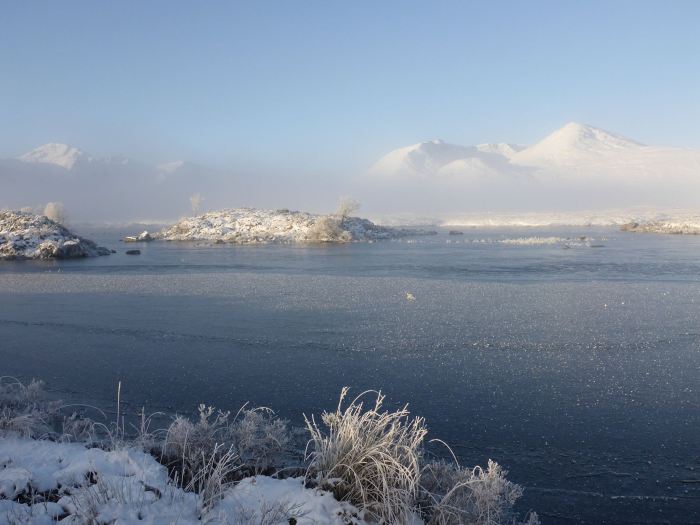 After a run of bad luck with the weather it was very pleasing to have timed our December meet so perfectly.