Having visiting the Laggan area (the Cabin, Balgowan) in November 2015, the club returned to the area for our March 2016 meet. The venue this time was the SMC’s Raeburn Hut on the A889 North of Dalwhinnie. There is no shortage of hills in the area with the Monadhliath Hills, the Creag Meagaidh group and numerous other hills dotted along the A86 towards Spean Bridge. 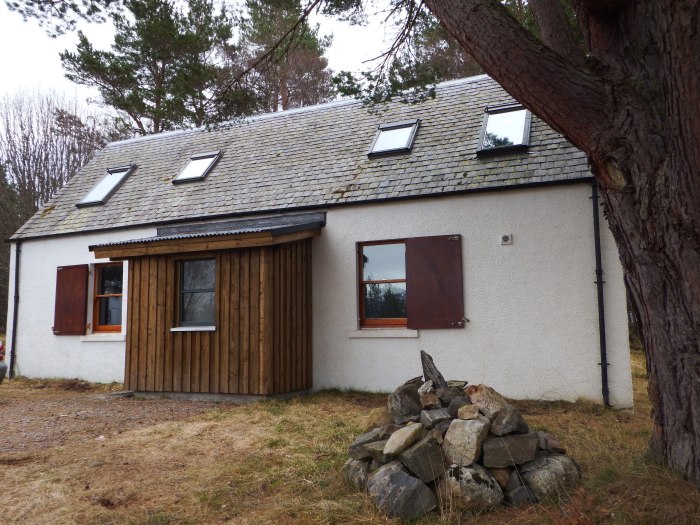 The forecast was looking reasonably promising and hopes were high for another great weekend. Unfortunately, there were a couple of late call-offs. Ian Millar was unwell and President James Fraser, having put his size 9s through the family’s new bath whilst tiling was under detention until the job was properly finished. So while the rest of the Club were heading for a couple of nights on the tiles, poor James was having a nightmare with the tiles.

A few members were there for one night only but in total 14 members made an appearance over the weekend:

George and Susan picked up Norrie in Pitlochry on the Friday morning and they headed North, firstly to unload some stuff at the Hut and then the intention was to scoot up the nearby Corbett of Meall na h-Aisre, a decent enough hill but probably not in anyone’s top 50.

With the forecast looking good for the day and a lack of certainty about Saturday’s weather a short committee meeting (lasting about 3 seconds) concluded that they should instead head for the twin Munros of Stob Coire Easain and Stob a Choire Mheadhoin alongside Loch Treig. They wouldn’t claim to get every decision right – but this was certainly one they got spot on!

After a short walk to the Treig dam they took to the hill emerging close to a concrete hydro pillar before heading south west up the very steep cone of Meall Cian Dearg. The snow was soft and not too deep but the angle of ascent and slippery grass underneath ensured that full concentration was applied to this section of the climb.

By this time, sunshine and blue skies was the order of the day and extensive views opened out in every direction except, that is in the area of Meall na h-Aisre, where the clag sat defiantly over the hill. The smugometer suddenly hit 9.8 as the realisation dawned as to just how good their decision had been.

The distance and drop between the munros is fairly modest and the continuation of the walk to Stob Coire Easain was a joy with fantastic vistas, particularly over to Glencoe. 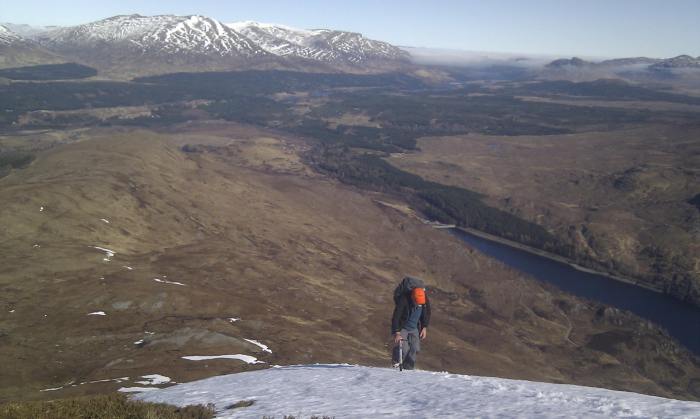 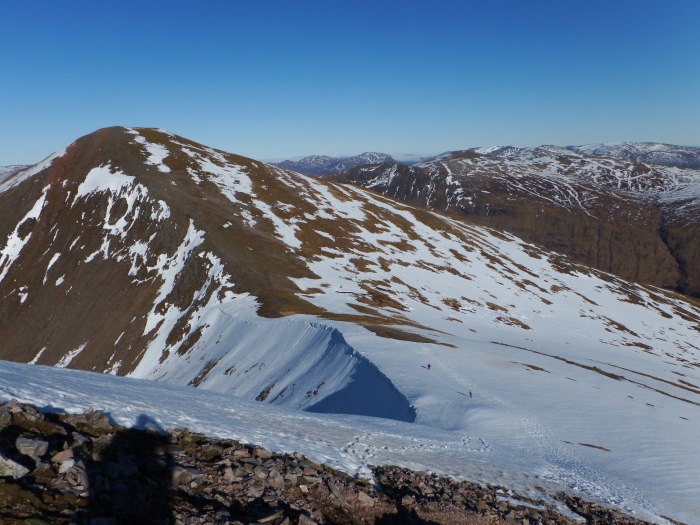 After a wee bit of debate, the decision was taken to re-ascend Stob a Choire Mheadhoin and return more or less by the route of ascent, avoiding the steepest of ground beyond Meall Cian Dearg. They briefly considered dropping down to the Loch Treig from the bealach but came to the conclusion that only a bunch of useless amateurs would attempt to return that way.

Paul had made his way up north on his own and enjoyed a wee cycle run in the area before returning to the hut and getting the fire on before the others arrived.

Over the course of the evening, the others arrived – apart from Jim Hughes who was coming up early on the Saturday. It was new member Deb Dallas’ first meet with club and having wasted no time in popping the Prosecco immediately endeared herself to the other members courtesy of a tub of stunningly delicious chocolate brownies.

Over a few drinks, and a soundtrack of Norrie belting out a few new favourites on his guitar, plans for the next day were discussed. Bill, Rowena, Ally and Neil were heading for the lone Munro of Geal Charn – with Deb accompanying them up on the lower part of the walk.

Raymond, Jim Aire, Alan and Ian planned to do the Easain walk that the others had done that day. They would be joined by Jim Hughes who travelled up on Saturday morning.

George and Susan had to return down the road on Saturday evening so elected to go for the twin Corbetts of Cruach Innse and Sgurr Innse on the Lairig Leacach. Norrie’s old legs were gently aching so he elected to accompany them along the track and stop off for a cool drink at the bothy which sits below the Grey Corries before walking back out. Paul also decided to join them – keeping his options open as to whether the cool drink or the Corbett summits might prove the more attractive.

The weather was trying hard to make its mind up on Saturday morning as the various groups headed off. Bill, Rowena, Ally and Neil headed up Glen Markie accompanied by Deb. As Deb returned back to the van, the others headed up Pipers’ Burn to the lochan nestling in Gael Charn’s eastern corrie. Ally and Neil set off to follow the rim of the corrie round to the summit. Bill then led Rowena up a snow covered gully which emerged directly onto the summit plateau. Rowena had been keen to get some serious ice-axe and crampon practice and the photos suggest that either she really enjoyed it or she had perfected the art of the smile-grimace. 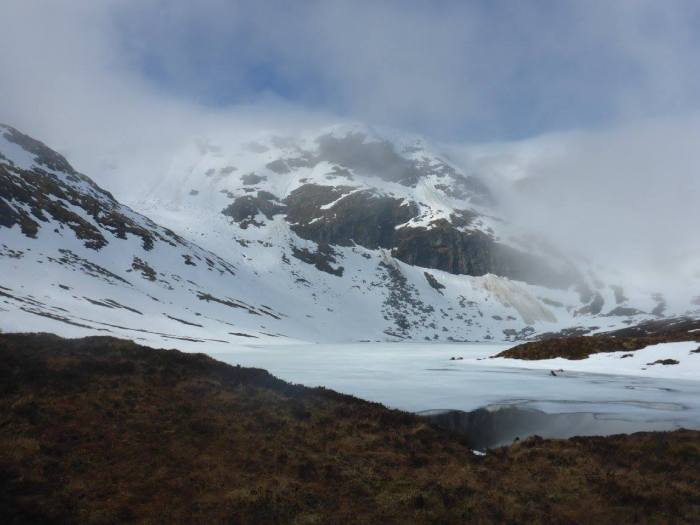 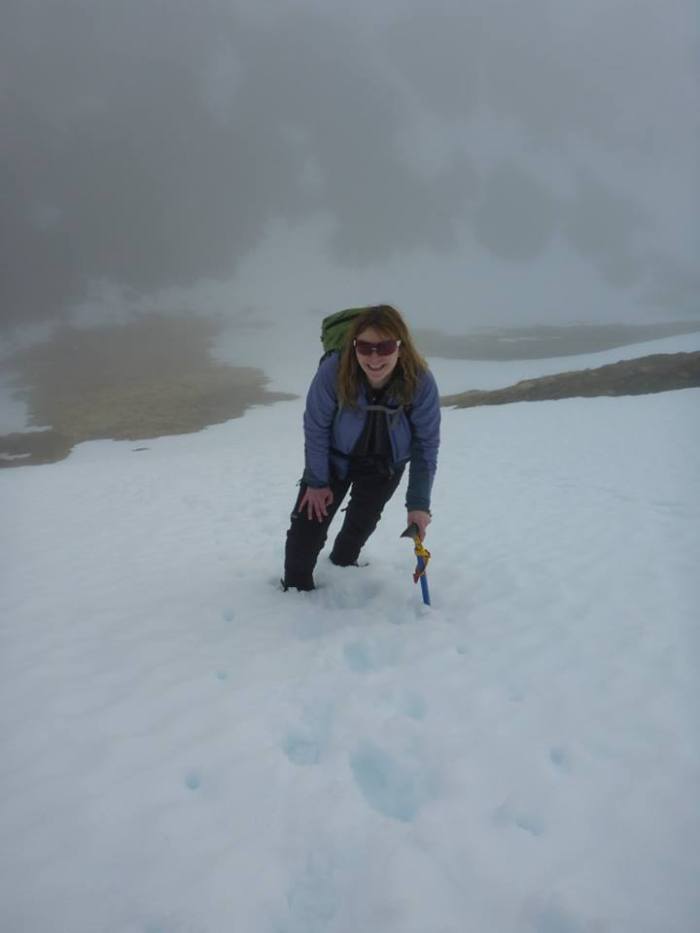 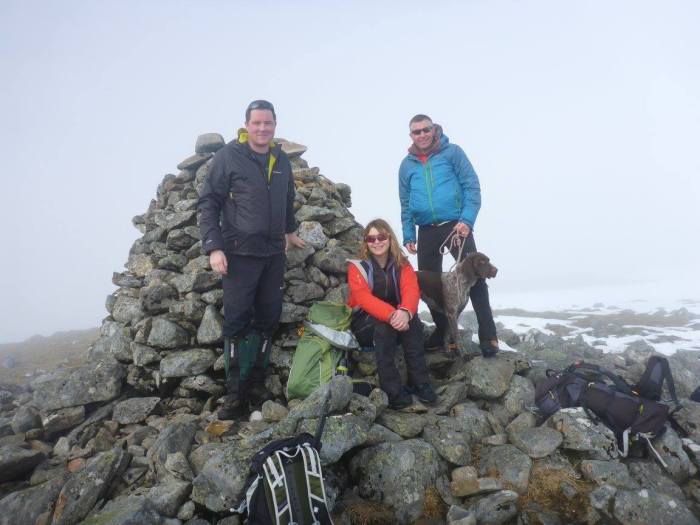 Unfortunately, they weren’t treated to blue skies and sunshine at the summit but despite that they really enjoyed their outing.

While the others were checking whether they had packed their ice-axes and crampons etc, Norrie’s check list consisted of: bottle – check: bottle-opener – check. With hindsight he ought to have also checked whether he had taken his boots with him. As it was, he hadn’t and his 10 mile walk to the bothy and back would need to be undertaken in his thermal crocs!! As we know – Croc walkin’ is somethin’ shockin’ when your feet just can’t keep still……..

The weather was showing some promise as he headed along the Lairig Leacach with George, Susan and Paul. They met the “wee minister” on the way and 45 minutes was spent whilst Paul ran through all his recent misdemeanours that required forgiveness.  A couple of kilometres before the bothy, George and Susan headed up to the low point between the hills – accompanied by Paul who had decided to add to his meagre list of Corbetts climbed.

The “Innses” are fine little hills with a plenty of (mostly optional) scrambling on the ridge. They were fortunate enough to get to the southernmost hill Sgurr Innse in excellent sunny conditions before heading back home over a claggy Cruach Innse. 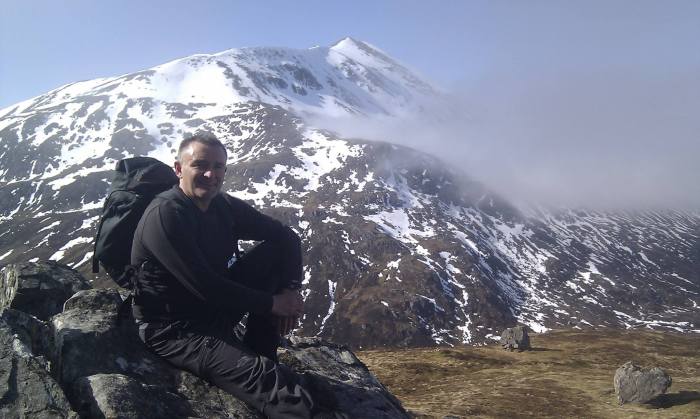 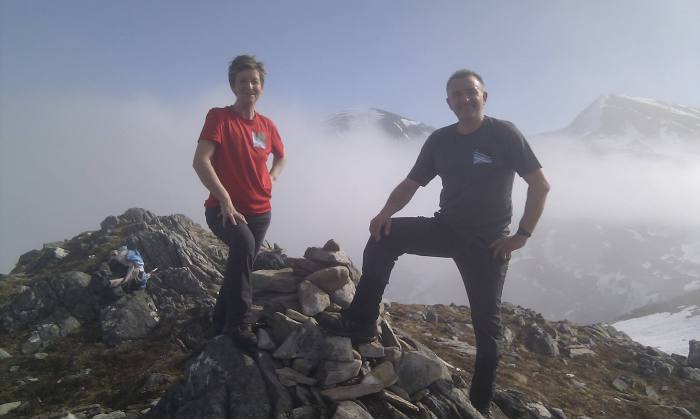 Meanwhile, Norrie’s Crocodile Shoes carried him safely to the bothy where a chair was borrowed from inside so he could sit in the sunshine and drink in the views and his Crabbies before heading back out the track to meet the others. 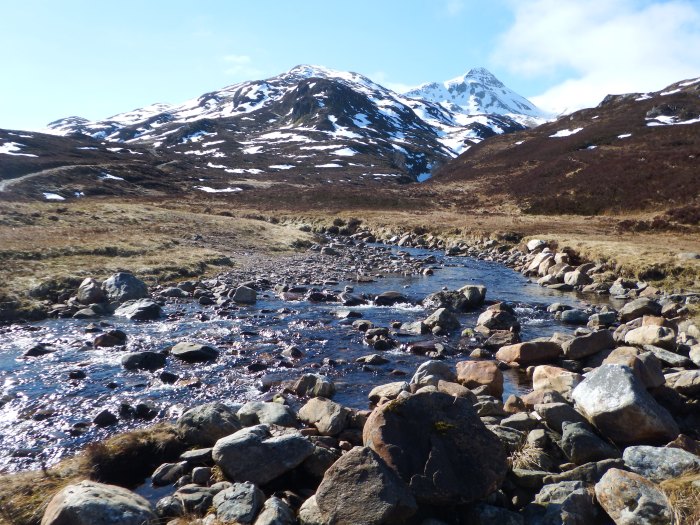 The A-Team of Alan, Raymond, Ian, Jim and Jim had set off from Fersit in questionable weather conditions, but with hope in their hearts. Their check list was also incomplete as the map and Jim’s piece still lay on the table in the hut.

They must have been quite baffled when they saw the plethora of footsteps left by George, Susan and Norrie on their way up and down the previous day – it wouldn’t have given them much of a clue as to the best route.

As they climbed though, their spirits rose higher and higher as they gradually ascended through the cloud and mist into bright sunshine above the inversion. Brocken spectres and fogbows were captured for posterity as the distant peaks poked out like small volcanic islands in a foggy sea. There are not many better sights on a day’s hillwalking than the pleasure of walking above the clouds in blue skies. One particular brocken spectre cast a giant image behind wee Alan – making him look almost 5ft 6in tall….a remarkable phenomenon 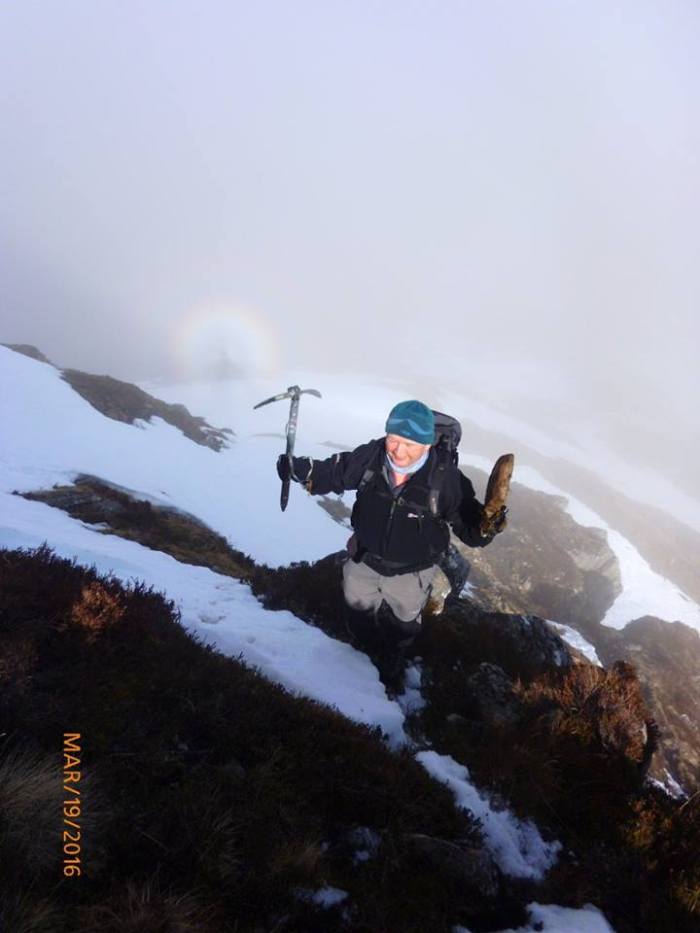 They soon reached the summit of the first Munro where there was a minor falling-out between two of Snow White’s latest recruits, Greedy and Hungry, also known as Alan and Jim. The dwarfdom fellowship was soon restored though as they headed off to Stob Coire Easain inhaling the great scenes unfolding before them. 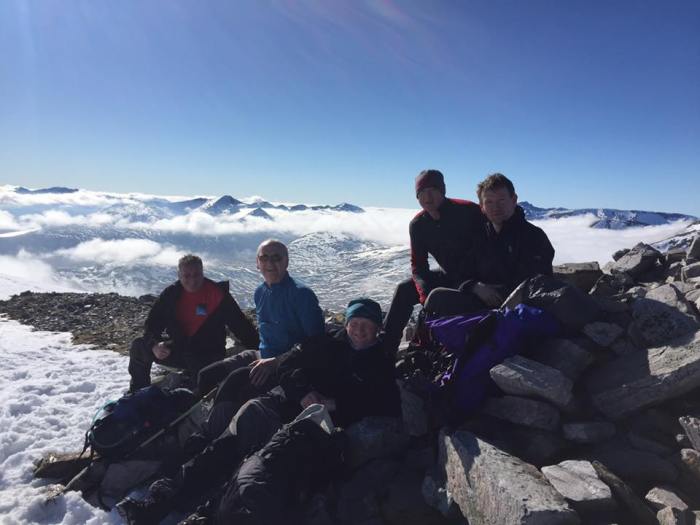 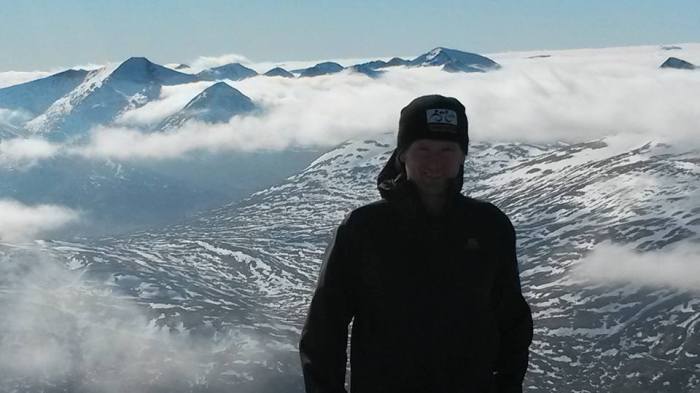 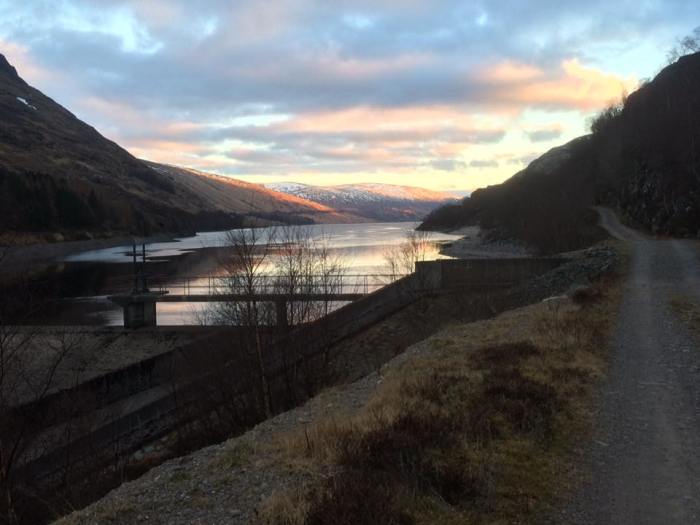 On their return off Stob Coire Easain, the prospect of a great bum slide or three was an opportunity not to be missed and like a waddle of penguins they took turns in sliding ungraciously in a series of skids and slithers all the way down to the Loch Treig shoreline. Their elation was tempered slightly by the prospect of a long pathless trudge along the side of the loch back to the car.

Back at the hut, the other members all having returned were beginning to look anxiously at the clock as the anticipated return time of the “Five Climb the Easains (and slide down on their arses)” group was well overdue. Phone signal on these hills and at the hut is pretty poor so Ally and Norrie drove a distance along the A86 to see if radio contact could be established. Soon connection was made and excuses delivered for the length of time it had taken and before too long everyone was back in the hut replacing some calories.

Unfortunately, Deb who had been unwell all week had to return home and George and Susan were also off back down the road due to a clash in their social diary.

A relatively subdued but pleasant evening ensued. Norrie’s “return of the hiccup” ensured there was little singing (and in his case, drinking). There was a titanic battle by the “old firm” of Aire and McGrandles for the McGrandles Cup, but just as Paul seemed to have it almost sown it up Jim scored a massive own goal as he sneaked upstairs to his bed well before midnight.

Once again, the flipper and wooden compass would need to be carried over to the next meet with no-one admitting any wrong-doing that might have seen them gain the award.

An ugly rumour later surfaced that Raymond had been indulging in some very inappropriate singing after most of the others had gone to bed. If proven, and following his earlier lunar display, his tally of penalty points will rise to six leaving him close to disciplinary action.