The Club’s Burns Supper is always one of the highlights of the calendar and a hugely successful event was held last year at Glassie Farm majestically situated overlooking the town of Aberfeldy and the River Tay.  There was a very short conversation amongst the committee before it was agreed that a 2018 revisit should be arranged and so, on 26th and 27th January the club returned to this outstanding location. The potential disadvantage of this location in January is that access is by steep forest roads which could be impassable for most vehicles following a snowfall. Fortunately, the previous week’s snow had largely disappeared, and everyone was able to negotiate the track safely.

The weather on the Friday was extremely kind, and for those fortunate enough not to be working, there was a grand opportunity to get a walk in before the forecast harsher weather arrived overnight.  Norrie arranged to meet George and Susan in Weem and head for one of the Glen Lyon Corbetts, Cam Chreag. Having arrived 10 minutes early, Norrie took the chance to get a few photos of Menzies Castle and some posing ponies in a frosty field.

The Glen Lyon road was only slightly dodgy, and they safely arrived at Innerwick where a track leads initially through a forest before following a burn west towards the slopes of their intended target. The conditions were excellent although the deep soft snow hampered their progress as the gradient steepened. Once the ridge was attained it was easy going along the short distance to the summit with astounding views of the winter wonderland in all directions. A slightly unorthodox descent engineered by George saw them quickly back down onto the track. Susan was heading back home and dropped George off at Norrie’s car and the pair made their way up to the bunkhouse – after an abortive search for a bottle of hoisin sauce in Aberfeldy. 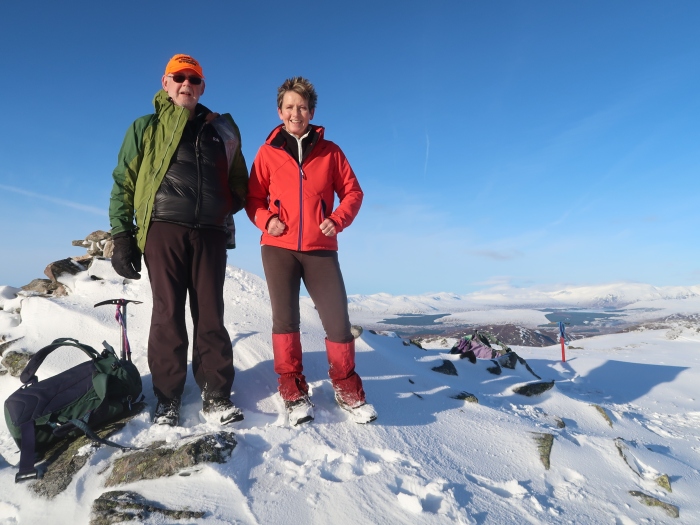 During the course of the evening all the others arrived and swiftly unpacked before quickly entering into relax mode. As the night wore on and thirsts were quenched, a phalanx of musicians took turns to gie it laldy with Cowboy, Gerry, Stuart, Norrie and Raymond taking turns with their guitars. Gerry also provided accompaniment on his mandolin and Jim Hughes kept a steady tempo with the beat of his bodhran.  James provided a couple of harmonica sonatas with his trusty road manager, Jim Aire ensuring he provide a blaw and a sook at the right time. 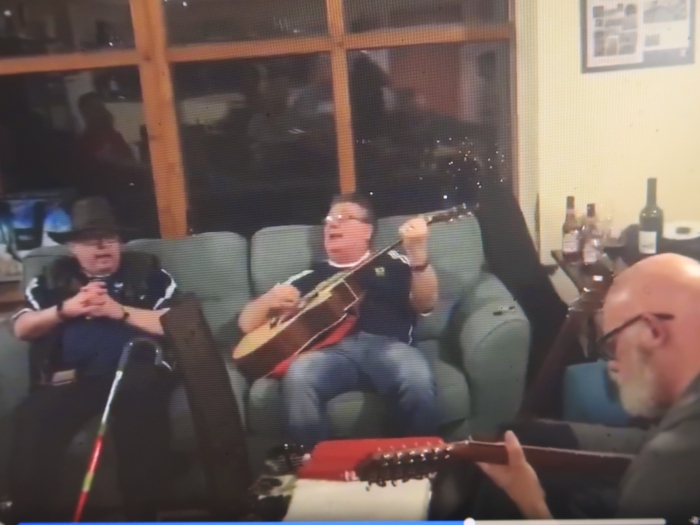 The evening could not conclude without a champagne (or maybe a prosecco) cork being popped in celebration of Jim Hughes’ retirement. After nearly 50 years working, he was now finally out of ladies wear (and gents wear too..). The smile on his face was a joy to behold.

On Saturday morning two groups of walkers made plans for the day.

The elite team of James, Alan, Neil, Jim Aire and Gerry were determined not to let the poor conditions prevent them from a Munro ascent and the iconic nearby summit of Schiehallion was their target. If nothing else, this would prove whether their gear was worth the few pounds they had spent on ebay! The “Fairy Hill” is a fairly easy, if lengthy ascent in normal conditions but with deep soft snow on the ascent and howling winds providing a constant buffeting, this was certainly a challenge. With the new-look slimmed down Alan firmly in the programme, they progressed manfully westwards upwards and on to the bouldery undulating ridge.  Like spacemen on some far-off planet they edged their way deliberately along the rugged ridge before finally reaching the 1083m summit at it’s west end. Frozen fingers were endured as the obligatory photos were taken prior to the slog back down the slopes to the relative warmth of the car. A great effort in the conditions

Having climbed a hill in perfect conditions the previous day, George and Norrie had less ambitious plans. A walk directly (more or less!) through the woods in the direction of Farragon Hill, a Corbett several kilometres north of the bunkhouse was their plan. They were joined by Douglas and Jim Hughes and, driving up that morning, their European friends Caroline, Javier and their teenage daughter Ines. Caroline and Norrie had already aborted an ascent of this hill from the North a few weeks previously and Paddy Power was certainly not paying out on a successful ascent this time round.

Navigating through forests is notoriously awkward and the intended path north west was missed (or no longer existed) and the group enjoyed a short clamber up Cluny Rock before a following another path up towards the serene Loch Glassie where the swans skating on the frozen surface seemed surprised to have visitors. A few hundred metres on from the Loch, a collective decision was made that Farragon Hill could wait for (yet) another day. An alternative route back was chosen which would take in a visit to a slightly larger expanse of water, Loch Derculich. 500 metres from the loch, the group split as Norrie, Douglas, Jim and Javier decided to take the track south and try and find their way back to the bunkhouse whilst George, Caroline and Ines carried on to get a closer look.

Slipping and sliding on the icy paths the first group emerged onto the road leading up to Brae of Cluny farm. There were several conversations between some of the best navigational brains in the club before they eventually followed a track that took them back into the dense woodland. A few hundred metres of arduous fighting through the argumentative pines finally saw them emerge onto the main forest track along which they gleefully strode back towards the bunkhouse.

In the meantime, George, Caroline and Ines had made it down to the main road and a phone call to Javier, who had just arrived back at the bunkhouse meant that they had the luxury of a run back up the hill in his van when he went down to collect them.

Of the remaining attendees, only Raymond burnt off significant calories as he went on one of his runs round the tracks surrounding the bunkhouse. The others visited the sights (and public houses) of Aberfeldy or simply chilled out – or in Lorn’s case, worked in the relaxing accommodation.

Early in the evening, once everyone had returned and showered, the Club’s 2018 AGM was held in the dining room. Following an extremely short Chairman’s report from James, the rest of the meeting was wrapped up in 25 minutes.

An army of volunteers armed with peelers and mashers had begun the preparation for the traditional Burns Supper. James had purchased some mammoth haggises which would have fed the whole of Aberfeldy. Jim Aire had generously prepared and brought up some soup. Similarly, Gerry had organised some delicious desserts and with George kindly donating a nice bottle of malt for the toasts, the stage was set for yet another unforgettable evening. Caroline and Javier had picked up their son Oscar who had taken the bus to Aberfeldy and for our European friends this was to be their first experience of a Burns Supper.

Before the meal was served, James McDonald delivered a very moving and heartfelt speech in memory of absent friends and fallen mountaineers and hillwalkers.

After the soup had been supped, the haggis was escorted by Paul round the room on its groaning trencher, piped in by Major CD Mackinoyz. Norrie did the honour of addressing the “great chieftain”, although tradition was turned on its head as an ice axe, rather than a knife was wielded to cut through the pudding’s ample hurdies.

Prior to the main meal being served, Lorn delivered the Selkirk Grace – but with an amusing twist to cater for the vegetarians in the company.

With second helpings heartily consumed of the glorious meal and fantastic desserts, it was time for the celebrations to step up a gear.

In yet another break from tradition, Norrie mused that our national bard might have written some rap music had he been born in more recent times. He then proceeded to deliver the 45 Rap of which the purpose was to introduce all the club members to our guests and to offend each and everyone present. 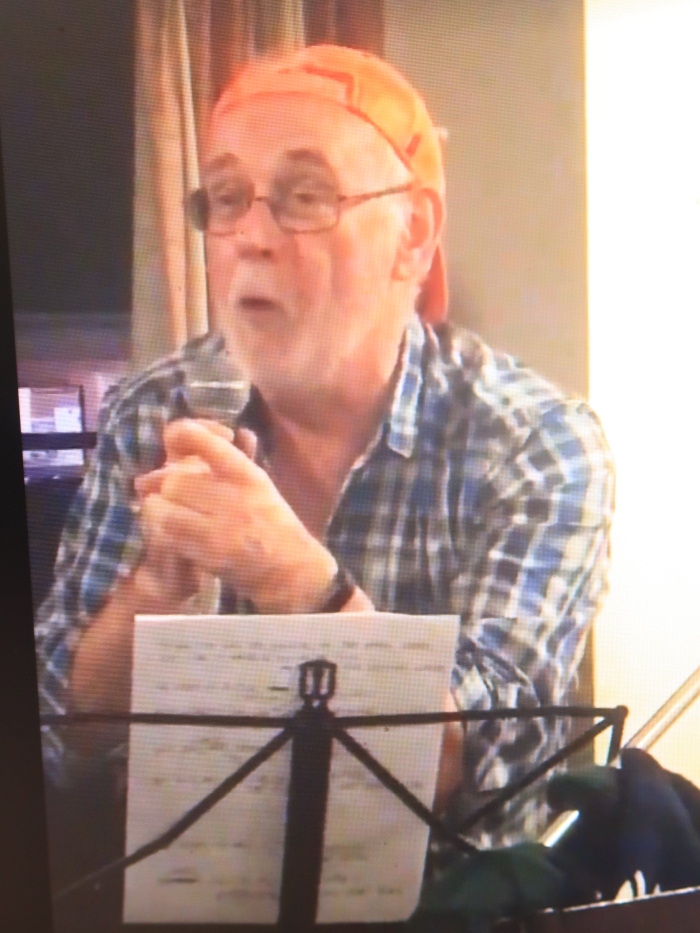 Donna managed to bring a bit of grace to the proceedings as she executed a highly amusing “Reply from the Lassies”.

It was then time for more music as Gerry, Norrie and Cowboy uncased the guitars with some Burns songs initially, eventually leading into a gloriously eclectic sing-song – with Donna as usual on backing vocals.

Unfortunately (in some ways) for Raymond and Lorn they were involved in a race meeting the following morning back in the Central Belt and they were required to lay off the alcohol as they were driving back that evening.

Similarly our European friends had to head back home that evening as well and they departed (we think) highly entertained if somewhat bemused.

The remaining attendees continued the party until late into the night/early morning before finally everyone had retired to bed.

Fortunately there was no hurry to leave the next morning and a very relaxing morning was enjoyed eating a leisurely breakfast and enjoying some of the more melodic songs of Gerry and Norrie.

Eventually, everyone departed and began counting off the days until the 2019 Burns Supper.